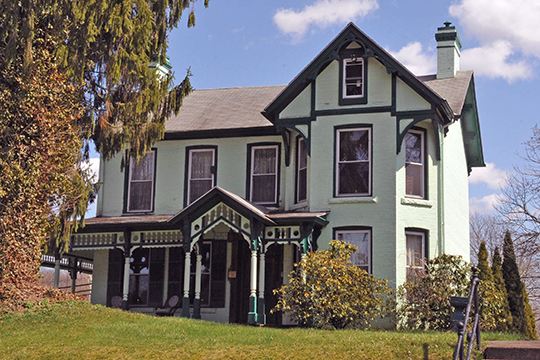 The Weston Downtown Residential Historic District was listed on the National Register of Historic Places in 2005. Portions of the content of this web page were adapted from a copy of the original nomination document. [‡]

The Weston Downtown Residential Historic District is notable as a architecturally cohesive concentration of locally-significant, primarily domestic architecture that dates from the late 1830s through the post-World War.

The District consists of a 60-acre area located immediately west of the downtown in the north-central West Virginia community of Weston, approximately 100 miles northeast of the capital city of Charleston. The district is primarily residential in character.

The Weston Downtown Residential Historic District is laid out in a grid of the following streets: Main, Center, Court, and Water Avenues run in a generally north-south direction and are intersected by First through Eighth Streets. Unnamed alleys run between the principal streets. The streets in the district are paved and street lighting employs pole-mounted modern cobra-head devices with overhead wires. The topography of the district is relatively flat until Court and Center Avenues cross Seventh Street, where a hillside leads to the district's northern boundary. The West Fork River forms a portion of the district's western boundary and Stone Coal Creek traverses the district in its northern reaches. The district's overall ambience is created by a well-maintained collection of buildings with streetscapes and lawns punctuated by mature trees and brick sidewalks in some areas. In front of some homes in the district are concrete sidewalks bearing the impression of a diamond-shaped motif with the legend "WPA 1939." Some houses have fences both of wrought iron and stone.

The buildings in the district are generally two stories in height and rest on stone foundations; some of the district's twentieth-century buildings have foundations of concrete block, both smooth-finished and rock-faced. Wood and brick is used for domestic architecture in essentially equal proportions; some buildings are finished in stucco. The district's churches are of masonry. Roof forms include the laterally-oriented and front-facing gabled roof as well as the hipped and pyramidal forms. Buildings influenced by the French Second Empire style have the Mansard roof form which characterizes the style and Dutch Colonial Revival-style buildings are gambrel-roofed. Patterns of fenestration include the flat-topped window (the most common) as well as windows with round- and segmental-arched openings. Religious buildings influenced by the Gothic Revival style have lancet-arched windows, while those of the Romanesque Revival style use round-arched openings. Art glass is found throughout the district; some houses have colored art glass windows as well as clear leaded plate glass transom sash and sidelights and religious buildings exhibit religious art class. The oldest buildings within the district are the Talbott-Moore-Warren-Sleigh House, (454 Main Avenue), whose earliest section dates from 1839 and which has Queen Anne-style modifications dating from 1898, and the 1844 Gibbons-Morrow-Ross House (325 Main Avenue). The vast majority of the buildings post-date 1880.

Architectural styles represented within the district include the Queen Anne, American Foursquare, Gothic Revival, Tudor Revival, Colonial Revival, Romanesque Revival, French Second Empire, Bungalow, Craftsman, and Dutch Colonial and Neo-Classical Revival. The Queen Anne style is among the most prevalent style in the district. Many of these houses represent vernacular interpretations of the Queen Anne style or vernacular houses with Queen Anne detailing. Characteristic features include an irregularly-massed form, a variety of surface textures and finishes, and rounded turrets or towers. Among the most formal Queen Anne-style residences in the district is the 1886 Barnes-Wyman House at 357 Main Avenue. The French Second Empire style appears but once in the district, in the substantial house at 236 East First Street; this property dates from ca. 1853 and exhibits a dormered Mansard roof added decades after the original construction.

The Colonial Revival style was born in the fervor of patriotism generated by the American Centennial of 1876. Some Colonial Revival-style buildings are reasonable faithful representations of eighteenth-century design, while others only include a hint of Colonial detailing, typically a Palladian. The Dutch Colonial Revival style employs a gambrel roof form, which may or may not be accompanied by more formal Colonial-era detailing. Properties of this style in the district include the houses at 427 Main Avenue, 332 Center Avenue, and 209 Court Avenue . A series of three repetitive Dutch Colonial Revival-style houses are found at 203, 211, and 215 East Eighth Street.

Another prolific style within the historic district is the ubiquitous American Foursquare, which is often interpreted as more of a house type than an architectural style and appears on nearly every street in America dating generally from the decades between 1910 and 1930. Representing purely twentieth-century design, such houses are typically square in form, generally with a hipped or pyramidal roof penetrated by dormers. They appear equally in wood and masonry, exhibit facades that are two or three bays in width, and have a porch, typically with a hipped roof. This style is represented by the properties at 111, 204, 210, 333, 339, and 359 Court Avenue, 226 and 218 East Fourth Street, 440,464, 315, and 338 Main Avenue.

The Neo-Classical Revival style employs forms and detailing from classical antiquity and often appears in substantial public and institutional architecture. This style appears in the district in the 1926-1930 Board of Education building at 239 Court Avenue and in the 1917 Masonic Hall at 346 Main Avenue.

The Gothic and Romanesque Revival styles in the district occur in religious design and borrow forms, massing, and fenestration patterns from the Middle Ages. The former style employed lancet-arched fenestration while the latter used the round-arched window and door opening. Representative examples include St. Patrick's Roman Catholic Church at 224 Center Avenue and the Weston Presbyterian Church at 312 Main Avenue. Both churches date from 1914.

The Tudor Revival style appears in Weston in domestic architecture dating from the 1920s and 1930s, and employs a half-timbered exterior finish suggestive of Medieval English design. Houses executed in this style in the district include 551 Center Avenue and 325 and 621 Court Street.

Bungalows and Craftsman-style homes in the district are small of scale, gable-roofed, and executed both in wood and masonry, including some with a stuccoed finish. Examples of this purely twentieth-century style include 501 and 560 Center Avenue, 405, 425, 535, and 554 Court Avenue.