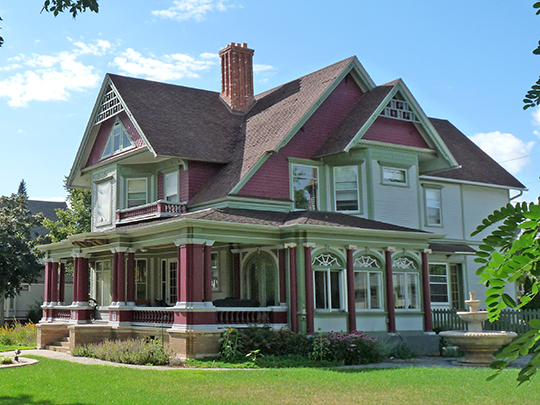 Located on the edge of Wausau's downtown, the Andrew Warren Historic District is a neighborhood of significant architecture ranging from the Greek Revival style to twentieth century Period houses. All or part of some ten city blocks comprise the boundaries which extend from the north side of McIndoe Street to the south side of Grant Street and generally from Fourth to Seventh streets. Sections of several blocks were excluded because they include new structures and parking lots. North and east of the Warren District are newer residential neighborhoods, while to the west and south early homes have been razed and replaced with commercial structures, churches and parking lots. The sixty-two buildings within the district are all houses except a church (First Universalist Church which is listed on the NRHP), two contemporary multiple dwelling units and the YWCA (a contributing Colonial Period building). Architectural styles represented include Greek Revival, Italianate, Queen Anne, Prairie School, Neo-Classical Revival and twentieth century Period styles, most of which were built from 1875 to 1934, the time of Wausau's growth as a center of the lumber and wood products industry.

Although the Warren District has many distinct architectural styles within its boundaries, the neighborhood maintains a cohesiveness, partly due to the dramatic changes in character of the buildings just outside the district. On several blocks within the district are houses of diverse styles placed side by side: The Hiram C. Stewart house designed by George W. Maher in the Prairie School style juxtaposed between the 1875 Robert Johnson house of Italianate design and the August Kickbusch house in a twentieth century eclectic style; the Underwood-Hagge house in Neo-Classical Revival style between the vernacular clapboard Kelly-Gooding house and the Louis Pradt house in the Queen Anne style.

Some of the houses have had alterations which reflect changes in living styles. The 1875 Kate Stafford house had two additions for living space and a porte-cochere which have given a Prairie School feel to the original Italianate style. Porches have been removed, added and enclosed on many houses. Although originally all were single family homes, thirteen houses have been adapted for multiple housing units; one is a museum; another serves as part of a church complex. Other alterations were due to a desire to keep pace with changing architectural styles. Original spindle and post porches were frequently replaced with classical style porches featuring columns or square piers. Several clapboard or brick houses were stuccoed. The Underwood-Hagge house, built in 1894 in a Queen Anne style with open porches and a round corner tower was severely remodeled in 1904 into a Neo-Classical Revival style house with columned portico, Palladian window and dormer windows. Only the rounded corner, once part of the tower, gives a hint of its former style.

Fortunately, the district boundaries are dominated by structures which set apart the Warren District from neighboring residential or commercial areas. The imposing Neo-Classical Revival style Cyrus C. Yawkey house with its massive columns anchors one corner of the district; the Colonial Period style YWCA building with Georgian entrance anchors another corner and is often mistaken as a house. On the north edge of the neighborhood stands the only Spanish Colonial Revival style house, the E.D. Pardee house with "barrel tile" roof and large arched front windows. The George W. Maher designed Prairie School homes of A.P. Woodson and Hiram C. Stewart are on the north and south boundaries respectively. On the east edge of the district the John J. Sherman house is unusual for an 1885 house. The double tiered porches and columns lend a Greek Revival look. Other houses which contrast with neighboring areas are the massive Cornelius Curtis house with octagonal corner tower, the Tudor Revival style Claire B. Bird house designed by Alexander Eschweiler and the William Wilson 1856 Greek Revival style house which anchors the northeast corner of the district. (It was moved to this location in 1903.)

The Andrew Warren Historic District is important as an architecturally and historically significant collection of houses built mostly from 1870 to 1934. Adjacent to the commercial center of the city, Wausau's wealthy lumbermen and successful merchants and professional people chose the neighborhood for its Greek Revival, Italianate, Queen Anne, Neo-Classical Revival, Prairie School and Period style houses which exhibit a diverse and yet harmonious blending of late nineteenth and early twentieth century homes. The district is especially significant architecturally because it includes buildings designed by nationally-significant Prairie School architect George W. Maher and talented Wisconsin architect Alexander Eschweiler. Locally, the district is one of two eligible residential neighborhoods of architectural and historical significance, the Warren district having been developed earlier than the East Hill district to the east. The city of Wausau stretches east and west from the Wisconsin River in what was called the "Wisconsin Pinery" in the 1830's. The vast white pine forest attracted the attention of St. Louis lumber merchants who sent George Stevens to survey the river islands and nearby Big Bull Falls, a twenty foot drop in the river. By 1839 Stevens had built the first saw mill, dam and guard lock. When Marathon County was created in 1850, the growing settlement of Big Bull Falls supported four sawmills, a population of 350 and one "street" along the river. In 1867 the city whose name had changed to Wausau ("faraway place" in Chippewa) was still centered in ten or twelve blocks east of the river. A street by street description of buildings at the time mentions only shanties in what is now the Warren District.

Andrew Warren was one of the early mill owners and land purchasers. In 1853 he bought all of the land on which eastern Wausau was built. Gradually Warren sold off big sections of land, to the railroads in 1874 and to other land developers, but keeping for himself the undeveloped land along the edge of the Wisconsin River, and earning the antagonism of Wausau's nineteenth century politicians and speculators who viewed Warren as preventing industrial development of the river. Even as Warren sold off individual lots in Warren's First Addition, he was castigated in the local press for charging exorbitant land prices and for being an absentee landowner. (Warren had moved to Merrill and later to Illinois.) Warren Boulevard was changed to McIndoe Street in an effort to get even.

It was after the Civil War (probably 1868) when the first substantial house, the Warren DeVoe house, was built in the Warren District, but the real beginning of the district was in the 1870's when perhaps twenty or twenty-five houses were built. Five of those houses still stand. Important growth and development of a neighborhood occurred in the 1880's and 1890's when lumbermen built substantial dwellings and downtown merchants moved from second floor homes of commercial buildings. Between 1880 and 1900 wealthy lumber barons Cyrus Yawkey, Charles Winton, Merrit Atwater, Hiram Stewart, Cornelius Curtis, and Samuel Knox built impressive homes within the district. Successful merchants, lawyers arid bankers began moving into the district in the 1890's and began to predominate after 1900 when many of the lumbermen moved out of Wausau or built grander homes on East Hill. Since 1900 the district has continued to attract upper middle class families although some of the largest houses have become multiple dwelling units.