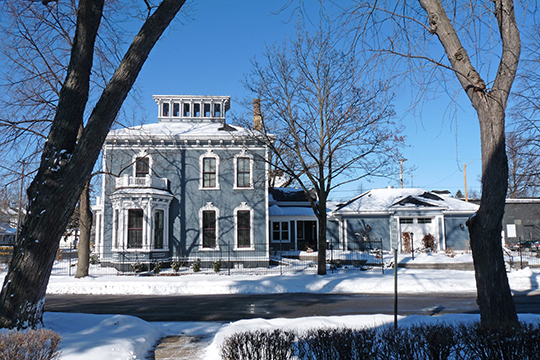 Marathon County had been home to the Ojibwa tribes since they had moved south from Madeline Island by the mid-eighteenth century. Much of Marathon County was taken over by the U.S. government in a treaty with the Western Ojibwa, signed in 1837. The following year, St. Louis lumberman George Stevens traveled north to investigate the newly-opened pine and hardwood forests along the Wisconsin River. By 1839, Stevens had built a lumber mill and dams at Big Bull Falls, destined to become the city of Wausau. Development was rapid along the river and by 1847, there were 45 mill saws on the upper river and all suitable mill sites were taken.

The lumbering industry dominated the development of Marathon County through the next half century. Community development was led by men in the lumber business: Walter McIndoe, who purchased the Stevens Mill at Big Bull Falls in 1848; Dr. William Scholfield, who arrived in 1851 and whose family operated the Martin mill on the Eau Claire River until the 1880s; Joseph Dessert, who purchased the mill at Little Bull Falls (Mosinee) by the 1850s and operated it for half a century; and Frederick Rietbrock, who developed the mill at Black Creek Falls (Athens) in 1879.

The lumber business provided the foundation for the lumbermen's attempts to construct railroads and create other businesses. McIndoe, elected to Congress in 1860, led the effort to secure a land grant for the Wisconsin Central Railroad. The railroad, however, ran not to Wausau, but along the western edge of the County, serving Spencer, Unity, Colby and Abbotsford. The Wisconsin Valley Railroad (later part of the Chicago, Milwaukee, St. Paul and Pacific system) arrived in Wausau in 1874. The Milwaukee, Lake Shore & Western (later the Chicago & Northwestern Railroad) went through Wausau on the way to Marshfield by 1880. The arrival of railroads and growth of the lumber business led to population growth and Wausau, the largest community, grew from 1,349 in 1870 to 12,354 thirty years later.

While the earliest attraction in Marathon County had been the forests, the soils throughout the western two-thirds of the County were particularly suitable for agriculture. Farming expanded rapidly. In 1860, 156 farms covering 20,366 acres were in operation. By 1900, 4,276 farms on 442,878 acres (43.9% of land area) showed the strength of agriculture. The early settlers grew a variety of crops including hay, potatoes, peas, oats, rye, barley and wheat. Corn became established later. Wheat never predominated in Marathon County, since by the time of widespread agriculture there, the primary wheat industry had already moved to the west. By the 1880s, however, the rise of dairying soon dominated agriculture in the County and in the state.

As early as 1885, over 230,000 pounds of butter and over 4,300 pounds of cheese were produced in Marathon County. Over the next decade, creameries developed to take over the home butter-making activities and the County had 17 such facilities by 1905. Cheese making also became important and by the end of the nineteenth century, Marathon County had the only sizeable activity in northern Wisconsin. By the Teens and 1920s, dairying had a strong foothold as a primary economic activity in Marathon County, displacing the lumber industry that had been in decline since the turn of the century.

Marathon County towns and villages generally started either as a lumber and saw milling site, or as a station site when the railroads built into the County in the 1870s and 1880s. Most settlements prospered with the lumber industry, but beginning in the 1880s as farming and the dairy industry began to expand, villages gradually began to serve as agricultural centers with processing facilities such as creameries, cheese-making factories, or grain elevators.

The transition from lumbering to agriculture was prominent in the area surrounding Frederick Rietbrock's saw milling settlement of Black Creek Falls (later re-named Athens). In the 1870s, Milwaukee attorney Rietbrock purchased the forests covering much of three surrounding towns, including Halsey, Johnson and Rietbrock. About one-third of the residents of Black Creek Falls were employed in Rietbrock's lumber business. Yet as the lumber business declined, Rietbrock led the way toward diversified farming with his own operation where he experimented with fertilizer use on crops, raised special breeds of dairy cattle, and encouraged agricultural education. Rietbrock's personal transition from lumber to agriculture typified the changes that occurred throughout Marathon County in the early twentieth century.

Other communities followed the same pattern, but were located on the various railroads that criss-crossed Marathon County. The Wisconsin Central, built on the western edge of the County, facilitated the development of the villages of Unity and Spencer in the white pine lumbering belt, and the cities of Colby and Abbotsford in the hardwood and hemlock forest belt. In the 1880s, the Milwaukee, Lake Shore & Western Railroad built through the County, running through the eastern towns to Wausau and southwest to Marshfield. This line (later Chicago and Northwestern) ran through Norrie, the Village of Hatley and Ringle on its way toward Wausau, and then west and southwest where the railroad served Marathon City, Edgar, Fenwood, Stratford, and McMillan on its way to Marshfield. Wausau and towns to the south had previously received service in 1874 from the Wisconsin Valley Railroad (later the Chicago, Milwaukee, St. Paul & Pacific) when it was built north from Wisconsin Rapids.

The lumber industry and the agricultural development that followed it provided the jobs and land that attracted settlers. While many of the lumbermen were of Yankee heritage, many other settlers were immigrants. Some were recruited from their first homes in Milwaukee and other cities; other residents were new arrivals directly from Europe. In terms of ethnic heritage, Germans have dominated Marathon County over the last century.

Germans from Hesse-Darmstad arrived as early as the mid-1850s and settled in the towns of Maine and Berlin by 1855. In succeeding decades other Germans followed, from Pomerania, West Prussia and Brandenburg. Germans especially concentrated in the northern and central towns, from Marathon, Cassel and Wien north to the county line. By the late nineteenth century, approximately 75 percent of the Marathon County population was German-born or of German parentage.

Marathon County also attracted immigrants from Poland by the 1870s. Many of the earliest came from Milwaukee, responding to ads about available land. A group settled in Cassel in 1875, and another group relocated in Frederick Rietbrock's lands to establish Poniatowski. After the turn of the century, colonization efforts in the southeast portion of the County attracted additional Polish settlers in Reid, Bevent, Franzen, Guenther, Knowlton, Kronenwetter and Mosinee.

Smaller colonies of other European settlers were scattered throughout the County as well. Norwegians were prominent in Elderon and in the southeast section. There was an Irish emigration to Emmet, Mosinee and nearby Cleveland. Bohemians were present in the Rocky Ridge area near Mosinee and others located in Johnson and Holton. A Dutch colony formed in Plover, Easton and Ringle in the early 1900s, with residents who moved from Milwaukee and Sheboygan.

While new residents came for land and to settle the outlying portions of Marathon County, the lumbermen who had first come to exploit the pine forests wrestled with change. The depletion of pine forests by 1900 forced lumbermen to accept hemlock and other hardwood as raw materials. While these forests kept the business going until about 1915, lumbermen increasingly sought to diversify with new ventures. A group of these leaders began meeting informally as early as 1901 and became known as the Wausau Group. Led by Cyrus Yawkey, owner of the Yawkey Lumber Company, the group invested in new sources of lumber supply or new business ventures. The Wausau Group created a new role for Wausau, and helped it transition from a lumber milling center into a managerial center for various lumber-related businesses. Although Wausau continued as a production center, under Wausau Group leadership the city became the home office location for widespread lumber holdings and funneled the profits back into the city.

Men in the Wausau Group were responsible for shifting from lumber production into the creation of paper mills and built the Wausau Paper Mills Company in 1899 at Brokaw. The Group supported the founding of the Wausau Sulphate Fibre Company, a wood pulp and paper operation, located at Mosinee. A third mill was planned in 1909 at Rothschild, with construction of a 450-foot dam across the river that would create Lake Wausau. The Rothschild plant was called Marathon Paper Mills Company and was led for 40 years by David Clark Everest, who ultimately took over leadership of the Wausau Group after Cyrus Yawkey.

Concern about safety hazards in the paper mills led to the Wausau Group's entry into the insurance business. In 1911, on the day that the Wisconsin Workmen's Compensation law was passed, the Wausau Group formed the Employers Mutual Liability Insurance Company. By 1931, Employers Mutual had become the leading writer of workmen's compensation policies in Wisconsin. Later, as Wausau Insurance, this company created a lasting institution that brought a national image to the city through its advertising that featured the old Chicago, Milwaukee, St. Paul and Pacific Railroad depot (located at 720 Grant Street). With leadership and interlocking directorates in the local banking industry and the street railway company, as well as leadership of local civic and social groups and arts and culture, the Wausau Group was responsible for carrying the city of Wausau and Marathon County into the mid-twentieth century.

In the second half of the twentieth century, Wausau continued to build on the diversified economic foundation created by the Wausau Group. The local control provided by the Wausau Group was clearly important in maintaining the economy of the area, although some have noted that this control prevented the influx of "new blood" or innovative ideas in business and civic leadership. In any event, there has been a strong sense of continuity in leadership in the County over time.