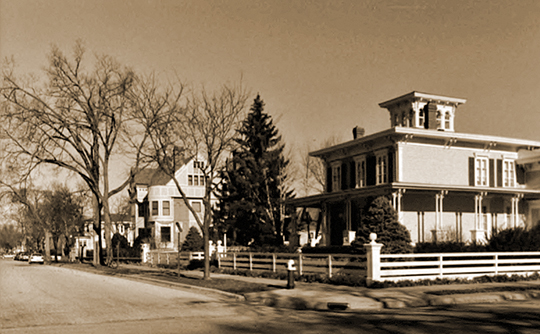 The 10th and Cass Streets Neighborhood Historic District [‡] was listed on the National Register of Historic Places in 2000.

The 10th and Cass Streets Neighborhood Historic District is a residential area located on the flat prairie between the Mississippi River on the west and the tall bluffs to the east. The area is divided into city blocks that are lined with trees. The spacious lots of the mid-19th century houses in the district were infilled, gradually, resulting in the present dense residential neighborhood.

Clapboard is the primary exterior construction material in the district, while brick and stucco are less visible. Asphalt shingles cover most of the roofs, although several continue to display the metal roofs often seen in the late 19th and early 20th centuries. While the earliest houses in the district were built in the late 1850s, the largest number in any one decade were those built in the 1880s and early 1890s. Very few modern buildings intrude upon the historic environment of the district. Of the 41 properties, 8 are non-contributing buildings. Buildings in which the architectural details were removed, in addition to the alteration caused by the application of vinyl, metal and shingle siding, and the construction of inappropriate additions to the building were viewed as noncontributing properties. All of the properties are residential.

The 10th and Cass Streets Neighborhood Historic District displayed its present appearance by 1940. Since 1940, a house at 215 South 10th was displaced by a parking lot. Also, in 1998, the Copeland property at 1004 Cass was subdivided to create a lot for the Queen Anne styled Frank Tiffany house that was moved from 403 South 11th to the vacant lot at 1018 Cass Street. The move toward multiple family housing has altered the character of the area. The addition of vinyl and metal siding to a large number of the houses along with the ensuing loss of the historic details over the years has further altered the historic appearance of the 10th and Cass Streets neighborhood.

The 10th and Cass Streets Neighborhood Historic District developed into a prestigious residential neighborhood during the nineteenth century. Many of the community's early civic, business, and industrial leaders lived in the neighborhood. The neighborhood developed east of La Crosse's downtown commercial and industrial district, and over the years, became increasingly dense as more homes filled in the vacant lots and occupied subdivided lots in the district. In the mid-1880s, the prosperity of the lumbering era began to transform La Crosse from a sleepy shipping and commercial town into an important lumbering city. More substantial houses replaced existing smaller, less prestigious houses and large new houses in the latest fashionable style filled in vacant and subdivided lots in the district.

The majority of the houses in the 10th and Cass Neighborhood Historic District were constructed from late 1869-1870 to the mid-1890s. The houses during this period were situated generally on large lots and were built by new residents either beginning or in the midst of their careers in business, industry and in their professions. One of the earliest residents in the district, James Manchester, a carpenter and builder, built the small vernacular frame house at 213 South 9th Street in 1858 just three years after he arrived in the city. Another simple frame house displaying elements of the mid-19th century Greek Revival style was erected in 1868 at 303 South 10th Street for the superintendent of the Colman Lumber Company, Nelson Allen, who came to La Crosse from Vermont in 1862. Thomas Laverty, a young storekeeper originally from New York, contracted with Richard Moffat and Son to have a house built at 237 South 10th Street in 1859. After he was disabled during the Civil War, Laverty sold the unfinished house to Stephen Martindale, a lawyer and insurance agent with a growing family, who completed the house to its present appearance in 1869. Another lawyer, S. S. Burton, came to La Crosse in 1857 and quickly became involved in the politics of the place. Burton, who was elected as a representative to the State Assembly in 1864 and as the 4th Ward alderman in 1865, built a small house on his property on the corner of 10th and King [929 King Street] in 1865 and soon enlarged and remodeled it in the prestigious Italianate style more in keeping with his status in 1869-1870. The professional men in the district at this time included the dentist Edgar Palmer, a new resident from Vermont. Palmer, who studied dentistry in Philadelphia and Vermont came to La Crosse in 1866, built the small Gothic Revival cottage at 1019 Cass Street on his property [three lots] on the corner of 11th and Cass streets in 1868. Palmer, one of the founding members of the Wisconsin State Dental Society as well as its first president, built a distinguished house (not extant) on the same property in the mid-1880s and used the small cottage for rental purposes.