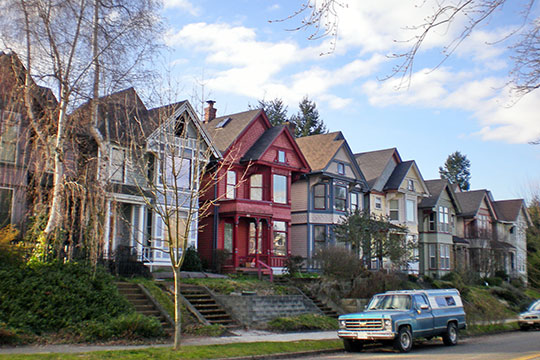 The South J Street Historic District was listed on the National Register of Historic Places in 1986. Portions of the content on this web page were adapted from a copy of the original nomination document.

The South J Street Historic District is an architecturally significant complex of Queen Anne style, detached row houses. The eight buildings of this district form the largest group of row houses of this period, quality and style remaining in Washington State. Three of the houses were designed by Proctor and Dennis, a prominent architectural firm in Tacoma. All of the houses were erected by a local building and loan association, which attempted to finance homes for the middle and working classes. The South J Street row houses have maintained their historic integrity, and they remain an important legacy of one of the most prosperous and expansive periods in Tacoma's history.

Six of the South J Street row houses (Nos. 708 through 718) were constructed in 1889, and the remaining two houses were probably finished early in 1890. The area surrounding the row houses was experiencing rapid growth during this period, although the pattern of development was irregular and resulted in a number of vacant lots and blocks. The year 1889 actually proved to be one of the most dramatic in the city's history. In 1887, the Northern Pacific Railroad had finally reached Tacoma, its western terminus, and the city was transformed into the quintessential "boom" town. Population increased by 300 percent between 1887 and 1890, and many believed that the town would become the major economic power in Washington. Boosters anointed Tacoma the "City of Destiny," and predicted that it would become the Pittsburgh or New York of the West.

With such a dramatic influx of settlers, real estate naturally became one of the city's greatest preoccupations. Hunt reports that "man's natural land hunger had been converted by wonderful profit-taking into a speculative mania. The real estate movement that had begun in 1887 and had become tempestuous in 1888, had by the middle of 1889 become a fury." (Tacoma. Its History and Its Builders, vol. 1, p. 497.) The value of new construction in 1889 rose 50 percent over the previous year. The development of streetcars also added to the growth of new neighborhoods. Prior to the development of public transit, workers of necessity lived within walking distance of their places of employment. Streetcars allowed the middle and working classes to move away from the central city into exclusively residential subdivisions. Horse-drawn streetcars were introduced to Tacoma in 1888, and twenty-five miles of electric trolley lines were in operation by 1890. Service was available near the South J Street row houses on K Street and 6th Avenue. Fire insurance maps of the late nineteenth century indicate that there were many other housing projects similar to the South J Street row houses in size or density. However, alterations or demolitions have significantly impacted the historic integrity of most of them.

The Washington Building Association of Tacoma (WBAT) financed the South J Street row houses and also acted as the contractor for construction. The WBAT, a building and loan association, was founded in early 1889. These building and loan associations were cooperative enterprises similar to British building societies. Working or middle class wage earners would purchase "shares" in the association and pay a fixed monthly installment. The money collected was then given to selected members to cover the mortgage for a row house. Members were chosen by lottery or money was "auctioned" to that individual willing to pay the most interest. Since bank loans for houses were subject to a high interest rate and complete repayment was expected within a very short period, these cooperatives enabled workers to obtain reasonable loans and to purchase homes for the first time. A building and loan association would sometimes buy larger parcels of land, as in the case of South J Street, and would presumably obtain building materials at favorable prices by purchasing them in quantity, further reducing the cost of the home. These cooperatives were quite successful in the nineteenth century, and thousands of them were in operation across the country by the 1890's.

The directors of the Washington Building Association were undoubtedly far more economically secure than the members. George E. Atkinson, O. B. Hayden, Horatio Clement, and John Brockenborough were leaders of the community and prominent in such businesses as real estate, insurance and building supplies. Whether philanthropy or self-interest was the predominant motivation of these men is impossible to determine. It is obvious that the building trades benefited by constructing these modest homes, and money that might have gone to personal or luxury items was instead invested in a home. A contemporary wrote that building and loan associations were "playing a growingly important part in the building up of the city, and the development of thrift and providence among wage earners... But even more important than their mere material achievements for the city and their members individually, has been their social and moral value... The building society is above all things to be commended as a conservator of the home and family institutions that underlie all our greatness and power." The South J Street district remains a fine example of an innovative social and financial endeavor that brought quality housing to the lower middle class.

Architecturally, the buildings are very interesting for their application of late Victorian stylistic motifs to relatively modest homes. Unlike period mansions, which featured a plethora of ornamental millwork applied to forms of dazzling complexity, the row houses rely on simple trim or shingle work arranged in an artful manner, which gives the building the appearance of being highly ornamented. This can be observed in the gables, where the patterns created by the applied trim are reminiscent of the Stick Style. However, other elements place these homes firmly within the Queen Anne idiom. The various cladding materials, particular decorative details, irregularity of plan, oriels and complex roof forms all reflect the influence of this style. Similar two-story Queen Anne homes can be found throughout the city; however, they are invariably interspersed with structures of other styles or periods and they never reveal the uniformity of appearance found at South J Street.

Four other homes in Tacoma are identical to Nos. 714, 716 and 718 on South J Street. These buildings (509 and 513 North E Street; and 1218 and 1220 North I Street) were also constructed by the WBAT and designed by the same architects. Like the South J Street group, these houses are very well preserved, but they are located in more architecturally mixed blocks. Unfortunately, many other homes, which may have had a similar genesis, have been altered beyond recognition. The consistency, materials, scale, rhythm, and density of these eight narrow homes is similar to that found in some of the nineteenth century districts in San Francisco. However, their distinctly urban character and well-preserved appearance are not typical of Tacoma. The South J Street row houses present an image of late-nineteenth century life unlike any other in the State.

Research has not uncovered the architect(s) for the five rectangular-bay row houses. It is possible that the entire row was designed by one firm; however, it is known that the WBAT did employ more than one firm for their other projects. Proctor and Dennis have been identified as the architects of 714, 716 and 718 South J Street (polygonal-bay group) by virtue of being identical to houses designed by them on South E Street and North I Street. Proctor and Dennis were in partnership between 1889 and 1892. During this time they designed a number of buildings, including: Nelson Bennett's Queen Anne style mansion, the addition to Stanford White's Tacoma Hotel (1891), the enormous Western Washington Industrial Trade Exposition Building (1891), and the Richardsonian Pierce County Court House (1892-1893). Unfortunately, all of these buildings have been demolished.

The brief partnership of Proctor and Dennis was reportedly prosperous, and C. A. Darmer remembers them as being among the most prominent designers of the period. Before the end of the century, Dennis moved to California and entered into a partnership with Farwell. Proctor remained in Tacoma and worked as a carpenter during the depression following the Panic of 1893. When favorable economic conditions returned, he resumed his architectural practice and eventually became State Architect. Proctor died in 1925. His home on Proctor Avenue is one of the few standing buildings that has been identified as his design.