Photo: Homes on the 1000 Block of Rugby Boulevard, Melrose-Rugby Historic District, Roanoke, VA. The Historic District was listed on the National Register of Historic Places in 2013. Photographed by User:Morgan Riley (own work), 2011, [cc-by-3.0 (creativecommons.org/licenses/by/3.0)], via Wikimedia Commons, accessed March, 2013. 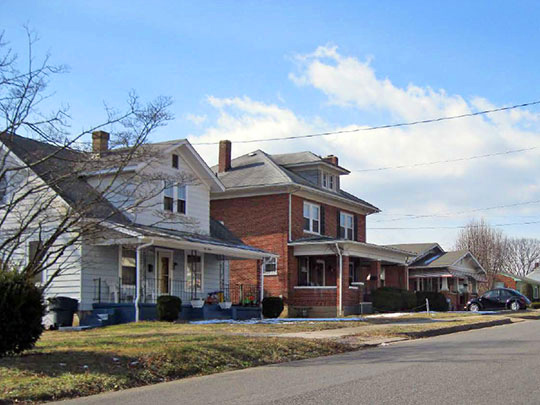 The Melrose-Rugby Historic District was listed on the National Register of Historic Places in 2013. Portions of the content on this page were adapted from a copy of the original nomination document. [‡]

The Melrose-Rugby neighborhood was developed between 1916 and 1949 as part of an early planned residential suburb of Roanoke. The historic district represents a small portion of the subdivision developed by the Rugby Land Corporation that was annexed by the City of Roanoke between 1925 and 1949. The district also includes several lots located along 14th Street SW that were developed by the Eureka Land Company. Located northwest of downtown, Melrose-Rugby's development as a working-class suburb was directly associated with the growth of Roanoke during the first half of the 20th century, the national desire for the healthier living conditions of the suburbs, and the improvements in transportation that made commuting to work affordable.

The District is an excellent example of an early 20th century residential suburb of Roanoke developed by a private land company as improvements in transportation made rural land accessible to downtown and other areas of the city. The neighborhood provides an excellent example of traditional residential development, with a narrow street grid and alleyways. Elements of early modern suburban design are also evidenced in the district. The wide and curving nature of Rugby Avenue evokes the curvilinear subdivision layout that would become prevalent after World War II.

The district contains a large and intact collection of early to mid 20th century domestic architecture that represents the full range of architectural styles and home building practices popular during this period. Its concentration of Craftsman Bungalows, American Foursquares, and Cape Cod houses reflect the movement in American housing design to provide well-constructed, efficient and affordable houses for the modern twentieth century family.

Melrose-Rugby was developed as a planned residential community in the early twentieth century. The land was previously located northwest of the city limits and provided much needed housing for moderate income families who worked in the area. Most of the land that comprises the district was developed by the Rugby Land Corporation. However, the small stretch of land that borders Eureka Park along 14th Street NW was developed by the Eureka Land Company.

The Rugby Land Corporation was chartered in October 1916 to develop the expanse of farmland formerly owned by J. Allen Watts and W.C. Thomas. The subdivision was platted in December 1916 under the direction of President Ronald Randolph Fairfax and Secretary O.B. Steele. "Ronnie" Fairfax was a prominent local businessman who was very active in real estate development. Previous business ventures included founding the Cotton Mill Company and the People's National Bank. He entered the real estate business in 1910 when he formed the Villa Heights Corporation and served as the Secretary and Director. He went on to form a number of other local land companies prior to establishing the Rugby Land Corporation.

The original Rugby subdivision plat consisted of 29 blocks containing 470 lots. The Melrose-Rugby Historic District includes only the 116 lots in the southeastern portion of the subdivision. The Rugby Land Corporation erected the stone entrance pillars to the neighborhood in 1916. In the months that followed, Ronnie Fairfax and his team of salesmen began to push the sale of the lots at the affordable price of $2.00 down and $2.00 per week. Restrictions were placed on the deeds, as was common practice in the era before zoning. The deeds stipulated that the minimum construction cost of a building be no less than $1,500. The ethnicity of current and future grantees was also constrained by the deeds. No property in the neighborhood could be sold or leased to any person of African descent for a period of twenty years after the conveyance of the deed of title.

The Rugby Land Corporation lots east of 12th Street NW were the first to develop. According to a Sanborn Map, thirteen dwellings had been constructed in this area by 1919. These lots were most likely the first to develop due to their proximity to 10th Street NW, which is a major thoroughfare with a bridge that crosses the railroad tracks. Lots were simultaneously being sold in the adjacent Eureka Circle subdivision in the late 1910s. Ronnie Fairfax was also involved in the sale of these properties and was said to be "terrifically busy" in 1918. As of 1919, none of the lots with frontage along the western side of Eureka Park within the district had been developed. However, construction on these lots commenced soon after, as the majority of the dwellings were built in the 1920s. By 1930, over half (51%) of the houses in the Melrose-Rugby Historic District had been constructed.

The City of Roanoke annexed many new residential neighborhoods in the years of growth and prosperity after World War I. Annexation by the city promised important municipal services, such as fire stations, schools, and libraries. Melrose-Rugby residents "clamored" to be included in the city limits after being missed by the 1919 annexation. They successfully petitioned the city in 1925 and were officially annexed in 1926 after receiving approval from Roanoke City Council. Several civic improvements occurred as a result of the annexation. The Roanoke Gas Company spent around $100,000 to lay 9.5 miles of mains to service the neighborhoods in northwest Roanoke in 1927. Roanoke City Fire Station No. 5 was built a few blocks south of the district at 12th Street and Loudon Avenue NW in 1911 and Fire Station No. 9 was built further to the west on 24th Street in 1924. The former Church of God/Primitive Baptist Church was also built on Rugby Boulevard in 1930, further establishing a sense of place within the neighborhood.

During the Great Depression, the population of Roanoke remained stagnant, with only a 1 percent increase in the population between 1930 and 1940. Residential construction in the city echoed this stagnation, as only five lots were sold by the Rugby Land Corporation and thirteen new houses were constructed between 1930 and 1940. The 1940 Census provides a sense of the neighborhood composition during this period in the district's development. Residents were almost exclusively white, with the exception of one Syrian couple. Most residents were working-class, with the majority working for the steam railroad or in retail sales establishments, presumably located downtown or in the small commercial area of 11th Street NW just south of the Rugby neighborhood. A lesser number of residents were employed by the local industries, including the American Viscose Plant in Southeast Roanoke and the Cotton Mill in Southwest Roanoke. Annual incomes for head of households ranged from $210 to $4,434 with an average of $1,600. Homeowners outnumbered renters and home values ranged from $2,000 to $4,000.

Home building across the nation stalled with the outbreak of World War II. Only two new houses were built in the district between 1940 and 1945. Nationally, a number of programs and initiatives were put into place to promote home ownership and stimulate the housing market after the stock market crash. These programs and initiatives had a major impact on the housing market nationally in the years after World War II.

The 1950s began as a prosperous decade for Roanoke and Melrose-Rugby with the post-war population increasing by 32 percent during this time. The Rugby Land Corporation issued its final deeds of title in 1949 and the remaining area of the original suburb plat was annexed by the City of Roanoke. The district's remaining vacant lots were built out with Cape Cod and Ranch Style houses. The neighborhood's population remained primarily white until the 1960s. By that time, two main employers of district residents had laid off thousands of workers. The American Viscose Plant closed in 1958, resulting in the loss of 1,750 jobs. During the same year, the Norfolk & Western Railway converted from steam to diesel engines and another 2,000 jobs were lost. Around the same time, urban renewal programs had supplanted much of the African American community from the Gainsboro neighborhood. Many of the displaced residents moved to Melrose-Rugby and it began to transition to a predominately African American neighborhood. The Melrose-Rugby Historic District continues to have a strong neighborhood identity within the greater context of the City of Roanoke.