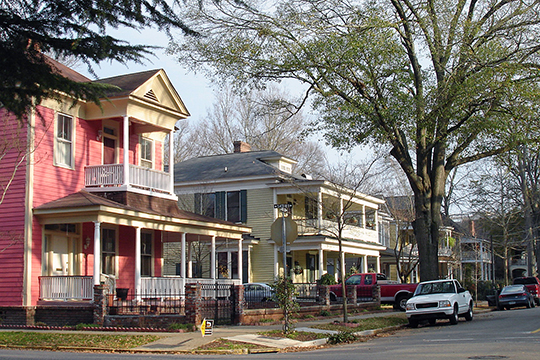 The Elmwood Park Historic District is a collection of 279 primarily residential properties in the Elmwood Park neighborhood of Columbia. This includes portions of Abbeville and Aiken Streets, Belleview Avenue, Bryan, Chester, and Clark Streets, Elmwood Avenue, Gadsden, Lincoln, and Park Streets, Price Avenue, Rembert, and Wayne Streets, and West Confederate Avenue. The district contains 219 contributing properties. The district's historic resources date from the turn of the twentieth century to 1940, and are representative of this era. The majority of properties were built between c. 1900 and c. 1920.

This early Columbia suburb is characterized by a regular grid pattern of streets, regular lot size, and diverse architectural styles. The predominant house type is two-story. Styles range from the numerous Queen Anne, Foursquare, and gable-front houses, to a few Colonial Revival houses. One-story structures are predominantly Craftsman influenced. Clapboard one-story Craftsman houses date from the first and second decades of the twentieth century. Brick bungalows are evident as infill from the 1920s and 1930s. There are also a number of shotgun houses in the earliest developed part of the neighborhood, Bryan Street and Price Avenue.

Commercial structures include a small grocery (913 Aiken Street), and a two-story combination residence and grocery (1018 Price Avenue), both found in the heart of the Elmwood Park Historic District. Two brick commercial buildings are included on the boundary of the district (729 Elmwood Avenue, a grocery, and 731 Elmwood Avenue, a drugstore).

Elmwood Park Historic District is a turn-of-the-twentieth century suburb of Columbia, South Carolina. It developed at a time of major suburban growth in the Columbia area. In 1900 Columbia's population numbered 21,108. By 1910 the population in the city had grown to 26,318, but the Chamber of Commerce estimated the population of the suburbs to be 11,000, predominantly white. (1) Elmwood Park was one of many suburbs. A 1908 publication listed Columbia as having twenty-one "sub-divisions." Elmwood was described as having "a nice settlement ... and much improvement is taking place". (2) ... As a nearly intact suburb, it illustrates the turn-of-the-twentieth century shift in Columbia, and nationwide, to the suburbs. Architecturally, Elmwood Park is representative of the range of, but similarity in, house types in early suburbs. Elmwood Park illustrates the movement away from the elaborate Victorian era styles to the "comfortable house."

Elmwood Park is significant as an example of the many suburbs that developed around Columbia at the turn of the century. Elmwood Park's southern boundary, Elmwood Avenue, (originally Upper Street) was the northern border of the city of Columbia. The first part of the Elmwood neighborhood was platted in 1891 on land off Main Street.(3) There had been scattered settlement in the area sine at least 1872, but no planned suburban growth until 1891. The bulk of what would become Elmwood Park was used as a fairgrounds until 1903. By then there was intense pressure for suburban growth in the area, as witnessed by the move of the fairgrounds.(4) The land developed rapidly as it became available. Selling points included the proximity of the streetcar line, and the school that had been proposed.(5) The neighborhood as settled was predominately white, and middle class. It was typical of planned real estate developments all over the nation. Real estate developers purchased tracts of land, subdivided them, and sold the lots to those seeking a suburban retreat. (6)

Elmwood Bark represents a cross section of early twentieth century house types. Victorian styles lingered on, represented by the numerous two-story Queen Anne-influenced homes. Shotgun houses are prominent in the earliest developed section, on Bryan Street and Price Avenue. Other houses, both one-story and two-story, show the Craftsman influence. The suburb typifies the trend in architecture away from elaborate styles and toward "the comfortable house."(7) Two schools in the district are typical of school design of the day, being monumental in scale. Logan School is the work of a well-known local architect, J. Carroll Johnson, chief draftsman for Wilson & Sompayrac (1910-12). James Burwell Urquhart, another prominent Columbia architect, designed Wardlaw Junior High School.(8)