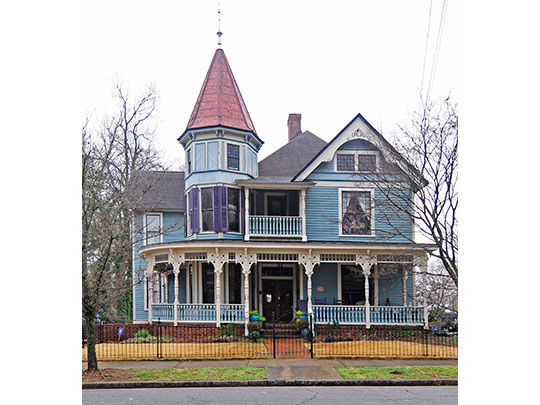 The Hampton-Pinckney Historic District was listed on the National Register of Historic Places in 1977. Portions of the content on this web page were adapted from a copy of the original nomination document. [1]

The historic district includes most of a two block area of Hampton Avenue from Butler to Lloyd Street. All of the structures located on Pinckney Street from Butler to Lloyd, with the exception of a modern office building on the corner of Pinckney and Butler, are included within the district. 213 Butler, which is located on the corner of Pinckney is also included.

Although the area is surrounded by commercial and low income housing, the district is intact with no modern or commercial intrusions. The tree-lined streets still reflect the atmosphere of the early 1900s and shield the district from the surrounding areas. Due to the efforts of the city of Greenville's Community Development Program, each of the houses has recently been brought up to meet housing standards, and a process of area revitalization has begun. The city has designated this area as the Hampton-Pinckney Restoration Area, and a neighborhood association has been formed.

Hampton-Pinckney Historic District is one of the oldest existing residential neighborhoods in Greenville, South Carolina. Architecturally it is representative of various styles and stages in Greenville's development. Historically it is an area in which prominent local community leaders have lived. The area, designated a Restoration Area by the city of Greenville and the recipient of Community Development Funds, is today experiencing a period of revitalization.

Around 1815-1816 Lemuel Alston sold over 11,000 acres of land to Vardry McBee, Sr. From this transaction the area which today comprises the city of Greenville, with the exception of a few lots, became the property of a man who was to play a significant role in the city's development. Called by some the "Father of Greenville," Vardry McBee was involved in all aspects of community life — industry, commerce, agriculture, education, and religion. Before his death McBee sold or donated most of his property. The remainder of the McBee estate passed to his son, W. P. McBee (who lived at 21 Pinckney Street).

Architecture: The Hampton-Pinckney Historic District reflects several stages in the architectural growth of Greenville. With the exception of the W. P. McBee House (ca. 1835) development first began on Hampton Avenue around 1890. The introduction of Victorian architecture can be traced from its origin in earlier styles (such as the Greek Revival of the W. P. McBee house) to the development into several vernacular styles (such as the Queen Anne of the Geer House and the Italianate of the F. B. McBee house). The second stage of development on Hampton Avenue occurred from 1900 to 1910. Eclectic architecture was dominant then and is exemplified in the Prairie style of the Gallivan and Briggs houses and the Neo-Georgian style of the Landrum House (remodeled in 1910).

Development on Pinckney Street did not begin until after 1902 and its major period of growth occurred from 1904 to 1915. Eclectic architecture again being in vogue, new building materials were incorporated such as red and tan bricks, and red tile roofs. Traditional architectural features such as 2/2 windows, delicate porches, and gabled roofs were replaced with multi-paned windows, wide porches with coupled columns, porte cocheres, hipped roofs, and shed dormers. Architectural development on Pinckney Street continued through the mid 1940s with the introduction of the Bungalow and Neo-Classical Revival styles.

Equally significant are the interiors of the houses. Many of them have remained intact and house such features as mahogany woodwork, gas chandeliers, stained and beveled glass, and porcelain bathroom fixtures.

Matoon Church is the oldest remaining black church building in Greenville. Organized in 1878 the church structure was erected in 1887 and is still in use today. The ground floor of the church was originally used to house a parochial school, grades 1-9. According to community leaders, the school at Matoon Church played a significant role in the cultural life of blacks in the late 19th and early 20th centuries. Around 1929 the Board of Missions discontinued the program. Today a children's day care center operates here.

Politics/Government: The influence of those who lived in the Hampton-Pinckney Historic District on the politics and government of Greenville was evident from the time of Vardry McBee, Sr. through the 1920s. Heyward Mahon (309 Hampton Avenue) and Henry Briggs (326 Hampton Avenue) both served as mayor of Greenville during the early 1900s. T. Q. Donaldson who owned property in the area served as state senator from 1872-1876.

Interviews with past and present residents of the Hampton-Pinckney Area. Conducted by Furman University students under the direction of Dr. Tom Shey, 1975.

Deeds of the properties in the area. Greenville County Courthouse.