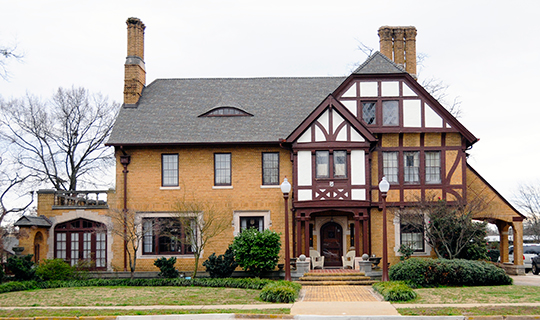 Greenville County is part of the old Cherokee lands, deeded to South Carolina in 1777. The Indians remained in their mountain fastnesses for 20 years after signing their grant, however, and not many white people ventured into the beautiful Cherokee country before the Revolution.

The first white settler in present Greenville County was Richard Pearis, an Irishman, who came from Virginia about 1765 as a trader, and not even the pirates of old Charles Town were more daring fortune hunters than he. He married a Cherokee woman and so ingratiated himself with the tribe that tradition records their repeated gifts to him of land that finally covered a tract 10 miles square. On part of this lordly estate now stands the city of Greenville and Paris Mountain, its name a corruption of Pearis. The enterprising settler called his acres 'Great Plains.' He built a home, a mill, storehouses, and a trading post, and lived the life of a prince. He served with the British forces in the French and Indian War and had the distinction of being the first Britisher to enter Fort Duquesne.

When the Revolution began, Pearis's allegiance was sought by both sides. It is said that he had promised his help to the Americans, but, disappointed at the military rank offered him, turned to the king's party. Held prisoner in Charles Town nine months, he became on his release a captain of the loyalist militia and attained the rank of colonel after performing several daring exploits. While he was in prison (1776) his plantation was captured and destroyed by Colonel John Thomas's Spartan regiment, on the grounds that it was a Cherokee and Tory stronghold. Ironically enough, after the fall of Charles Town, May 1780, Colonel Pearis received the 'submissions' or surrenders of General Andrew Pickens and, possibly, of Colonel Thomas. After the Revolution Pearis settled in the Bahama Islands on a grant from the British Government.

Greenville County was established in 1784. Its name is variously said to honor General Nathanael Greene of Revolutionary fame, to attest the flourishing verdure of the section, or to recall Isaac Green, an early settler. Most evidence points to the last inference.

Lemuel J. Alston, a brother of Governor Joseph Alston, the husband of the beautiful and ill-fated Theodosia Burr, came to the county in 1788. He bought 400 acres, 'a portion of the former plantation of Richard Pearis, and including his mill seat,' and there in 1797 laid out a village called Pleasantburg. Alston built a stately mansion in his little town, sure that settlers would soon be attracted, not only because of the proximity to the mountains, but because of the dawning possibilities for planting cotton and building mills.

Edward Hooker, who visited Pleasantburg in 1806, gives this picture: "We arrived at Colonel Alston's home, which is the most beautiful I have seen in South Carolina. The mansion is on a commanding eminence which he calls Prospect Hill. From the village six hundred yards distant, there is a spacious avenue formed by two handsome rows of sycamore trees."

In 1816 Alston sold his holdings to Vardry McBee. Born in Spartanburg County in 1775, McBee was called 'The Father of Greenville.' He leased the Alston house to Edmund Waddell for a hotel and summer resort until 1835, when he made it his own home, famous for hospitality until his death in 1864 at the age of 89. McBee's gifts included lands for the first four churches and the first academies. A constructive thinker, he recognized the potential sources of wealth in the county's climate and water power, and erected on the Reedy River one of the earliest cotton mills. He was instrumental in removing Furman University from Edgefield to Greenville in 1851, and in securing for Greensville in 1853 its first railroad, the Columbia and Greenville, later serving as its president.

Pleasantburg flourished as a resort, connected even in its early days by what were then considered good roads leading toward western North Carolina and Tennessee, and toward Charleston and Augusta. The falls of the Reedy River were soon utilized to furnish power for iron works, corn, and cotton mills. Robert Mills commended the community in 1825 for its beautiful site, its two well-kept taverns, and its new courthouse. 'So much wealth, intelligence and leisure are collected annually at the village,' said Mills, that he could not but 'anticipate a favorable result to the interior of South Carolina.' Pleasantburg then had 500 inhabitants.

In 1831 a progressive fever seized the town and its placid existence as a summer resort was disrupted by restless activity; stores, mills, and foundries sprang up. Citizens now wished their courthouse town to bear the county name. Accordingly, in 1831, little Pleasantburg vanished in the incorporation of Greenville and future industrialism was foreshadowed in the stir that replaced quietude. A busy factory, the predecessor of modern Camperdown Mills, usurped the young people's favorite swimming hole, opposite the site of Pearls's old mill. With the arrival of the railroad in 1853, Greenville's growth was assured.

In the years preceding the War between the States, the community was a hot-bed of Union sentiment with Benjamin F. Perry, respected throughout the State, as the leading spirit. When war broke out, no battles were fought in the vicinity and the city did not lie in Sherman's path. Wayside hospitals were established and women labored to comfort and supply the needs of war-weary Confederate soldiers. The mountainous area surrounding Greenville was overrun by deserters. In organized bands they preyed so persistently on the property of citizens that Major A. D. Ashmore requested a cannon to destroy one of their blockhouses in the 'Dark Corner.' In June 1865, President Andrew Johnson appointed Perry provisional governor of South Carolina. James L. Orr of Anderson County succeeded him the following November.

Greenville's manufacturing enterprises, crippled by war, revived upon its cessation, and the present city limits were established in 1869. The Charlotte and Atlanta Air Line, now the Southern Railway, was completed to Greenville in 1874, and about the same time the modern textile industry had its real start.