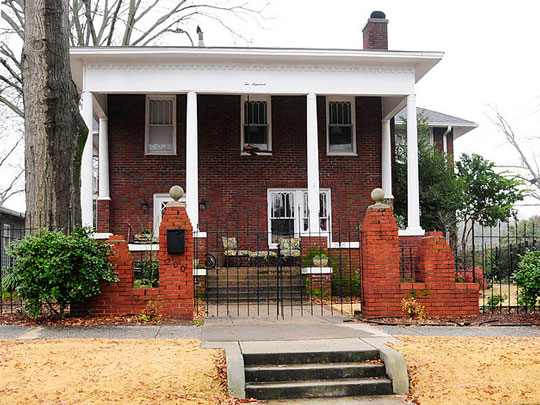 The Colonel Elias Earle Historic District is significant for its mixture of early 20th century architecture. It contains eighty-seven properties of which a large percentage are residential. Within the district are two properties currently listed in the National Register of Historic Places, Whitehall, built in 1813, and the Earle Town House, ca. 1810. The district was originally part of the estate of Colonel Elias Earle, a prominent early 19th century Greenville citizen. After 1900, the area was subdivided into residential lots and houses began being built in the area soon afterwards. Following the demand for textile products during World War I, Greenville experienced a building boom and the James-Earle Street area became a major middle-class neighborhood. Most of the homes in the district were built during the 1920s by businessmen who prospered in the postwar era. The district contains excellent examples of Colonial Revival, Bungalow, Shingle, and Tudor housing as well as many vernacular forms. The District is an intact residential neighborhood with few intrusions and retains its 1920s appearance. [Col. Elias Earle Historic District, Greenville County, SC, nomination inventory form, 1982, National Park Service, National Register of Historic Places, Washington, D.C.]