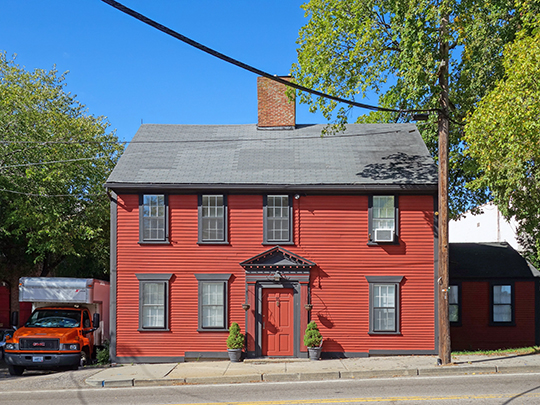 Samuel Gorton, founder of Warwick, arrived at Boston, Massachusetts, from England in March, 1636. A man of rugged individualism and a strict believer in legal formalities, Gorton's first few years in this country proved troublesome. Forsaking Boston after a short time, he established a residence at Plymouth and later at Pocasset, or Portsmouth, Rhode Island. The non-conformist Gorton was expelled from both these settlements for contempt of the civil authorities. Gorton held that no group of colonists could set up or maintain a government without royal sanction, and since no settlement in Rhode Island at this time had any such sanction, the opinion was a dangerous one. After participating with a group of partisans in a riot resulting in bloodshed, the Gortonists sought to evade authority of both Massachusetts and Providence. They purchased lands at Shawomet from Miantonomi, a sachem of the Narragansetts in January, 1643.

Gorton and his followers built their first homes to the north of Warwick Neck lighthouse, the section of the future city that would become known as Shawomet. Refusing to cooperate with any authority, Gorton was tried, imprisoned and sentenced to death in Boston. The death penalty was not carried out and the following year the Shawomet purchasers were banished back to Rhode Island.

Samuel Gorton and Randall Holden went to England, as emissaries from the harassed occupants of the Shawomet lands, to gain protection from Massachusetts. The two colonists were befriended by Robert, Earl of Warwick, chief member of the Parkiamentary Committee of Foreign Plantations, and he was instrumental in obtaining the guarantee of protection they sought. The Shawomet town fathers subsequently bestowed the name Warwick upon the Colony in appreciation of this kindness.

In 1647, the first local town officers of Warwick were selected.

King Philip's War (1675-1676) caused an abrupt pause in the growth of Warwick. Most of the settlers evacuated the town during this time, finding safety on the island of Aquidneck.

The colonists returned to their destroyed town after the war and began rebuilding. Soon grist mills, fulling mills and other establishments were operating on the banks of the Pawtuxet River. The first mill had been erected at Old Mill Cove as early as 1651. Another followed at Tuscatucket in 1677, and a saw mill and a grist mill at Centerville in 1677.

In the 18th century, with the rise of the textile industry in Rhode Island, the value of the Pawtuxet River as a source of water-power was a necessary asset to the town's growth in the manufacture of cotton goods.