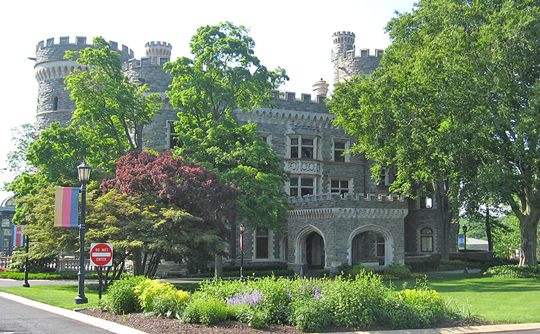 Grey Towers‡ was listed on the National Register of Historic Places in 1979.

Grey Towers Castle (450 S. Easton Road) is a 41-room, three-story structure built of grey Chestnut Hill stone with six towers. Indiana limestone is used on the exterior for the windows, doorways, balustrades, such ornaments as gargoyles and the crenellations which top the walls and towers. The eclectic architectural style is that of a medieval English castle, particular inspiration deriving from 12th century Alnwick Castle in Northumberland, England. The ground plan is that of an "L" measuring roughly 166 ft. by 174 ft. exclusive of terraces, with the main entrance on the east front within a porte-cochere. Towers of varying sizes stand at the northwest, northeast and south- east corners, at the west end of the kitchen wing, in the east wall beside the porte-cochere and in the south wall overlooking the south terrace. Open terraces line part of the east and west walls, joining at their, northern ends a covered terrace along the north front. Another deeper terrace with balustrades runs along a portion of the south front with a double-curving stairway of limestone descending to the drive. All roofs are flat, concealed by the crenellations. From the towers rise smaller towers topped with crenellations. A circular solarium, connecting with the dining room once stood on the south terrace but has been demolished. Green-houses located on the south lawn have also been razed.

Just within the east entrance to the castle, the interior is dominated by a main hall rising three stories to a coffered, barrel vaulted ceiling the concept of which is French Renaissance with similarities to vaulted ceilings at France's Chateau de Chambord. Galleries surround the hall on thee sides at the second and third floor levels. At the west end a grand mahogany stairway rises to a landing and divides right and left to the second floor gallery. A music room opens through a large archway onto the landing. All woodwork in the main hall and music room is of mahogany hand-carved in French Renaissance style with baluster forms based on finial designs from roofs of such French Renaissance chateaux as Chambord and Amboise. The mantel in the music room is clearly inspired by one of the mantels in the Salle des Gardes in the chateau at Blois. At first floor level, in the north and south walls of the main hall, are set large fireplaces framed in marble with mantels of limestone carved closely on the lines of the other mantel in the Salle des Gardes in the chateau at Blois. American-made tapestries produced by the firm of Baumgarten (signed and dated 1898) are set above the wainscotting in the music room and other tapestries from the same source hang above the wainscotting around the second and third floor galleries.

Doorways in the north wall of the main hall lead to two large, ground floor rooms elaborately decorated; that on the east is in ungilded eclectic late Louis XV style while the west room is gilded eclectic early Louis XV style with mirrored doors and two sets of French doors opening onto the west terrace. The ceilings of these two rooms are inset with oil paintings, the single large one in the west room bearing the signature of Francois Lafor (or Lafon). Each room has a single corner fireplace with marble mantel carved in the appropriate style. Both rooms have been carefully restored.

The ceiling paintings in the east room were done by the firm of Wm. Baumgarten and Co.

To the south of the main hall lies a paneled library, one pilaster of which carries the carved date of 1897. This room is now slightly altered to serve as the college president's office. Next to it stand a dining room with carved wooden Renaissance wainscotting, mantel and ornamental strapwork ceiling (now altered with low dividers for offices and fluorescent lights suspended from the ceiling), and breakfast room with carved wooden wainscotting, hunting tapestries above (by Baumgarten) and a glassed-in extension opening onto the south terrace. West of these, forming the other arm of the "L" plan, were kitchen and service rooms now altered for use as offices Behind the grand stairway in the main hall and beneath the music room lies an oak-paneled billiard room with fireplace.

The principal bedroom suites on the second floor, with dressing rooms, fire-places and marble baths, have been slightly altered to serve as dormitory rooms today. This is true of the other rooms on the second and third floors. Although the bathrooms have been more extensively changed, alterations in the other rooms are in the form of light partitions. The arcades separating the second and third floor galleries from the interior rooms have been inset with modern plate glass partitions and doors. Throughout the entire building heavy Belgian, glass, sometimes beveled, is used in windows, doors, mirrors and the skylights of the main hall. Much of the craftwork in wood and stone was reputedly done by European craftsmen settled in nearby Edge Hill.

In the attic above the main hall can be seen heavy beams of steel and sturdy oak as well. Surprising also for such an early date, rooms in the castle had their own mercury thermostats for controlling the heat supply. In the basement, a set of huge fans circulated cool air throughout the structure in summer. Heat and electricity for Gray Towers Castle and the Stable Building came through pipes and lines laid in underground tunnels leading from the power plant (now the Fine Arts Buildings).

Grey Towers represents a landmark in the career of Horace Trumbauer (1868-1938), a Philadelphia architect who is only now beginning to receive serious attention from scholars and practitioners in the field of architecture. By professional architects he has generally been overlooked as one not professionally trained and as a man lacking in originality of architectural design. Yet some recognize him as a man of great competence, perception and finesse in the creation of European style mansions which appealed to the wealthy entrepreneurial class during the late nineteenth and early twentieth centuries.

The first great step in Trumbauer's career came when he received the commission to design Grey Towers for William Welsh Harrison in 1893. Until then his endeavors as a newly-established architect had been on a small scale. Grey Towers typifies the eclectic school of architecture developing at the time and Trumbauer's own first important residence in this vein. When complete the building was known as one of America's largest homes and is recognized today as an outstanding example of an American castle. It attracted attention to Trumbauer and led to commissions for other mansions done in his own interpretations of various European historical styles.

In the Philadelphia area Trumbauer secured the patronage of the Widener and Elkins families. In 1896 he created Chelton House in Tudor style for George W. Elkins. In 1898 the Italian Renaissance villa Elstowe Park was built for William Lukens Elkins and in the same year came Lynnewood Hall, the Georgian home of Peter A. B. Widener. Meanwhile in 1897 Trumbauer had stretched afield to design Balangary, another Georgian mansion, for Martin Maloney at Spring Lake, New Jersey. In 1899 he drew plans for The Elms, the eighteenth century French home of Edward Julius Berwind in Newport, Rhode Island. Succeeding years found him creating more residences in Newport (Chetwode in 1900, Clarendon Court in 1903, Miramar in 1913), town houses in New York, Philadelphia and Washington and several hotels, office buildings, medical school buildings and private clubs in Philadelphia. He also designed campus buildings for Harvard and Duke Universities. In 1916 his office began work on Whitemarsh Hall, the suburban Philadelphia home of Edward T. Stotesbury.

Some critics regard Trumbauer as the successor to Richard Morris Hunt in creating mansions of distinction for America's wealthy. Most of the plans provided in Trumbauer's office ranged from Medieval and Tudor styles through Italian and French Renaissance to Georgian and eighteenth century French. In time he appears to have leaned more toward the latter two periods. Never again did he produce a medieval castle such as Grey Towers.

Some question has been raised as to the degree of responsibility assumed by Trumbauer himself for designs created in his drafting room during the later years, particularly after 1909. With Grey Towers there is no question; dating to 1893 it is entirely Trumbauer's work. Any attempt to assess his abilities and accomplishments as an architect of great American mansions must begin with a study of Grey Towers.

Grey Towers with its associated outbuildings typifies the architectural complex considered appropriate for the existence of a family of great wealth at the turn of the century. It particularly symbolizes the social aspirations of those rich entrepreneurs who sought to establish themselves in part through a show of opulence with family roots in the historic past. This spirit is seen not only in the castle form of Grey Towers but also in the fact that its owner researched and published his own family geneologies.

Grey Towers was erected for William Welsh Harrison, a member of Harrison, Havemeyer and Company, sugar refiners; in 1887 this family enterprise was incorporated as the Franklin Sugar Refining Company. The Harrison family played an important role in the educational and cultural life of Philadelphia in the late nineteenth and twentieth centuries. William Welsh Harrison joined his brothers in founding the John Harrison Laboratory of Chemistry at the University of Pennsylvania and the George L. Harrison Memorial House of the Episcopal Hospital. As a graduate of the University of Pennsylvania, where his brother later served as trustee and then provost, Mr. Harrison was a constant financial contributor to that institution. His son, W. W. Harrison, Jr., raised at Grey Towers, gave strong financial support to Abington Hospital.

In commissioning the construction of Grey Towers, W. W. Harrison not only satisfied some of his own aspirations but at the same time encouraged the creation of a monument to the taste and craftsmanship of his period. The castle itself is replete with the finest examples of handwork in wood, stone, glass and plaster ornamentation.

William Welsh Harrison died in 1927 and in April 1929 Beaver College purchased the estate from his widow. Founded in 1853 in Beaver, Penna., the college moved to the Beechwood School property at Jenkintown in 1925. [NOTE: Beaver College became Arcadia University in 2000.] After the purchase of Grey Towers the college operated at both sites until 1962 when the former Harrison estate finally became the sole campus. Originally under the auspices of the Methodist Episcopal Church, Beaver is now one of the church-related colleges of the United Presbyterian Church in the U.S.A., yet is itself independently controlled.