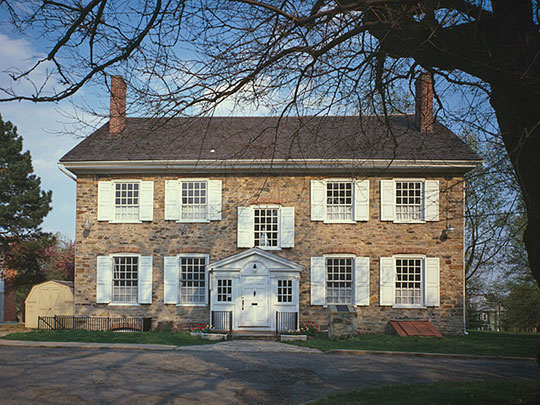 Summerseat was listed on the National Register of Historic Places in 1971. Portions of the content on this web page were adapted from a copy of the original nomination document. .

Summerseat was built in the 1770's for Thomas Barclay, a Philadelphia merchant, and acquired by George Clymer in 1806. It's a two-story brick and stone Georgian structure built over an elevated basement. It has a gabled and slate-covered roof. The house is five bays or about 52-feet wide and 36 feet deep. The wall of the front or east facade is of brick, while the west or rear wall is of fieldstone. First and second story windows on the east or main facade are topped by flat arches of gauged brick; windows on both stories of the west or rear elevation and of the basement on all elevations have segmental arches of gauged brick. First and second story windows are adorned by exterior solid shutters.

The center door in the east facade is topped by a rectangular transom and a triangular pediment. This entrance opens into the central hall that runs through the house to the rear. The stairs are set against the left (south) wall near the rear and are lighted by a large window set over the landing in the west (rear) wall. The four rooms, on each floor, each with their own fireplace, are divided into pairs by means of the two central halls. The house was restored in 1931 and renovated for use as a school administrative building in 1935. The walls, floor, and some of the woodwork appear to be original. The building is in good condition and is still used for educational purposes.

Summerseat, built around 1770, was from 1806 to 1813 the home of George Clymer, a signer of the Declaration of Independence for Pennsylvania, a merchant, and politician. The Georgian house was restored in the 1930's and is used for public school purposes

George Clymer was born in Philadelphia on March 16, 1739. His parents died in 1740 and he was raised by his uncle William Coleman, a prosperous Philadelphia merchant. Clymer also became a successful merchant and in 1765 married Elizabeth Meredith, the daughter of his senior partner. Becoming active in politics around 1773, Clymer from the first was an ardent and active advocate of the Revolutionary cause. Appointed to the Continental Congress on July 20, 1776 with Rush, Smith, Ross, and Taylor, to replace the Pennsylvania delegates who refused to sign the Declaration of Independence, Clymer, though not present when it was adopted, realized "his dearest wish" when he signed the document, for he had been among the first to advocate complete independence.

Clymer served three terms in the Continental Congress and was a member of many special and standing committees. In September 1776 he was commissioned, with Richard Stockton of New Jersey, to visit, inspect, and report on the Northern Army at Ticonderoga, New York.

Reelected to a second term in March 1777, he served on the boards of war and of the treasury, and on the committee to protect Philadelphia. He worked so hard at these tasks that after three months he was obliged, temporarily, to retire. His report on a mission to Fort Pitt in 1777-78 led Congress to organize an expedition against Detroit. In September 1777, following the Battle of Brandywine, the victorious British army ransacked his home in Chester County where he had removed his family for reasons of safety, on a detour in their march to capture Philadelphia.

Clymer served his third term in the Continental Congress from November 1780 to November 1782. Also a member of the Pennsylvania Assembly for a part of this time, he advocated reforms in the penal code and the public employment of convicts. In 1787 he was an effective delegate to the Federal Constitutional Convention and signed the Constitution. He was a member of the first United States Congress in 1788. After this term, Washington appointed him head of the excise tax department of Pennsylvania and then as a commissioner to the Cherokee and Creek Indians in Georgia, for the purpose of negotiating a treaty with them. He retired from public service in 1796. During the last period of his life he served as the first president of the Philadelphia Bank and the Academy of Fine Arts and, in 1805, was vice-president of the Philadelphia Agricultural Society. In 1806 Clymer acquired a large Georgian house, which he called Sumerseat in Morrisville, Pennsylvania. Here he died on January 24, 1813. He was buried in the Friends Meetinghouse Cemetery in Trenton, New Jersey, located across the Delaware River from Morrisville.