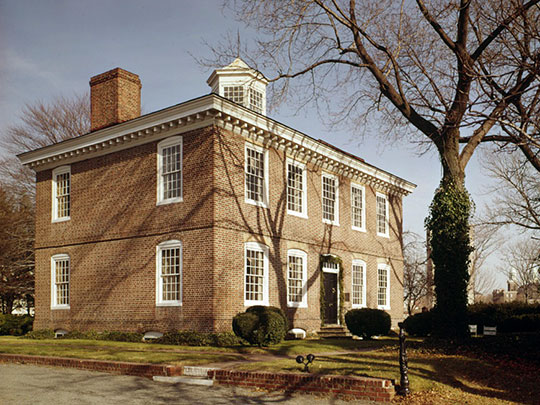 The Trent House is the oldest of Trenton's landmarks. It has been known by different names during history. At one time it was known as Kingsbury Hall, then Bloomsbury Court, and finally as Woodlawn.

The house was built by William Trent on an 800 acre tract. Originally it was constructed as an oblong building, and it exists today exactly as built except for a frame addition said to have been added in 1850 by James Redmond, who was owner at that time. Chief Justice Trent did not make the house his permanent residence until 1721; he died there on Christmas 1724.

The property was conveyed by James Trent, his eldest son, to William Morris, a merchant of the Island of Barbados, on March 28, 1729, Morris in turn conveyed it to Governor George Thomas of Pennsylvania in October 1733. Governor Thomas held it until 1753. During his ownership Lewis Morris, the first Colonial governor of New Jersey, leased the house. This was in 1742.

Governor Thomas conveyed the property to Robert Hopper on January 31, 1853. It was known as Kingsbury during his ownership. The following advertisement appeared in the Pennsylvania Journal for March 12, 1767:

"...it is accommodated with a gentile brick dwelling house, 40x48 feet, two stories high, four rooms on a floor, with a large handsome staircase and entry with a cellar under the whole building, and a courtyard on each front of the house, one fronting down the Delaware River to the ferry through a large handsome avenue of English cherry trees, the other confronting up the river to Trenton, with a large brick kitchen 30 x 20 feet, two stories high, with a well in it, and four handsome apartments above for servants..." [2]

William Bryant bought the Trent House on October 28, 1769. He was a practicing physician in Trenton during the early part of the Revolution, and the house was referred to by the Hessians as "The Doctor's House."

John Cox acquired ownership on October 28, 1778. He called the mansion Bloomsbury Court. Cox was an iron manufacturer at Batso, Burlington County. On September 24, 1792, the property was conveyed to Marin Bassile Gaston, L'Official de Woffoin, gentleman of Philadelphia. On October 27, 1795, he conveyed the property to Esther Cox, executrix, and John Stevens and Mathias Barton, executors of John Cox.

Between 1798 and 1838, the mansion passed through the hands of William Cox, Sr., Edward Burd and Edward Shippen Burd, Daniel William Cox, and Philemon Dickerson. The latter was governor of New Jersey from 1836 to 1837, and since he owned the Trent House during that time, it is most likely that he used it as the executive mansion.

James M. Redmond had possession of Trent House from 1838 to 1852, when it passed into the hands of Joseph Wood, at one time mayor of Trenton, who in turn conveyed the property in 1861 to Edward S. Stokes. During the ownership of Joseph Wood, Governor Rodman Price resided there through the years 1854-1857. It served as his executive mansion and was known as Woodlawn.