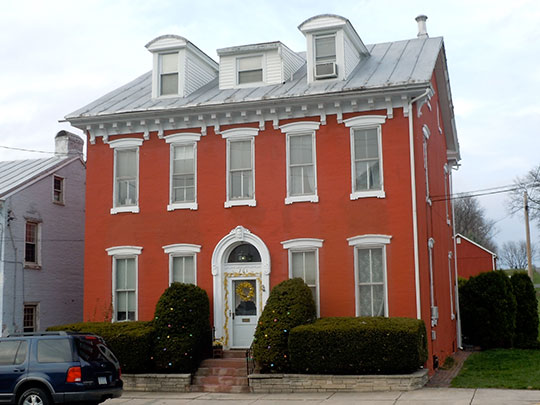 The Womelsdorf Historic District was listed on the National Register of Historic Places in 1982. Portions of the content on this web page were adapted from a copy of the original nomination document. [‡]

Womelsdorf played a significant role in the early settlement of the Tulpehocken area of Berks County, Pennsylvania. First settled by Germans who came to the area via New York, the present day Borough of Womelsdorf lay along the Tulpehocken Path, a major westward route of business and settlement in the eighteenth century. The town was founded, and grew, because it offered travelers a place to stop during their journeys and area merchants and farmers a marketplace for their products.

Local industry has been a key factor in Womelsdorf's development. In the nineteenth century, Womelsdorf was one of the largest cigar manufacturing areas in the state. It was the largest single industry in the Borough's history, substantially contributing to the Borough's economy during its peak years, 1875-1930.

The wide variety of buildings representing each phase of its history is one of the Borough's most notable features. Log houses from the earliest settlement of Womelsdorf coexist beside high style Victorian-era mansions. Three bay sidehall plan houses, a distinctive eighteenth century southeastern Pennsylvania style, are very prominent on the streets of Womelsdorf. This architectural diversity reflects the growth of the community and is one of Womelsdorf's most outstanding assets today.

The Borough of Womelsdorf lies in Heidelberg Township in western Berks County. Situated on a rich limestone belt, the town is located in a valley between two mountain ranges, the Blue Mountains on the north and the South Mountains on the south. The land was included in the vast proprietary colony chartered by William Penn in 1681. The first recorded inhabitants of the area were the Shawnee tribe of the Lenni Lenape Indians who settled there in 1705 by permission of the provincial governor. Finding an abundance of turtles in the area, they named the land and the creek running through it "Tulpehocke," meaning "Land of the Turtle." The Tulpehocken Creek is located approximately a mile northwest of Womelsdorf.

German settles came next to this area. Like the Germans who settled other areas of Berks County, they were the Palatine Germans, driven from their homeland by religious persecution. Unlike the other Germans in the county, however, the first Tulpehocken settlers migrated first to New York, settling on the Hudson River at Livingston Manor and then in the Schoharie Valley to the South. In 1723, a small group of families followed the Susquehanna and its tributaries down to Pennsylvania and the Tulpehocken area, becoming the first European settlers there. They were joined by a great influx of Germans from New York in 1727-1729. This later group included Conrad Weiser, later to become a noted statesman and Indian Agent.

The Womelsdorff family first arrived in the area in 1750, when Daniel Womelsdorff, a successful minister in what is now Amity Township.