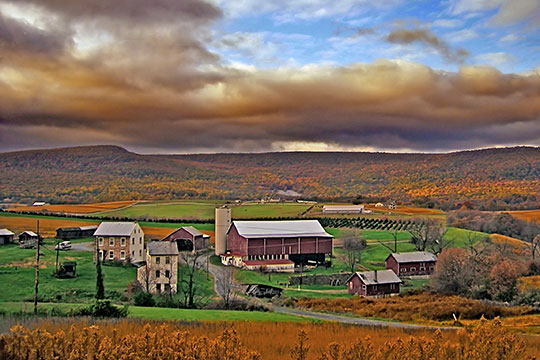 First settled around 1740, Windsor was incorporated in 1752.

Windsor was settled in 1740 and established into a township in 1752. It was so named after a place in England, whence some of the early settlers had come.

There is a reputed Indian burying-ground a few hundred yards west of the Blue Rocks, about five miles east of Hamburg, at the base of the Blue Mountains. In 1879, D.B. Brunner examined one of these graves, and found nothing; so he decided there were no Indians buried there, but he could not determine what caused the mounds.

The Windsor Furnace was built soon after the township was settled. It was located near the base of the Blue Mountains in the northeastern part of the township. A forge for the manufacture of bar-iron, a saw mill and a grist mill were early made a part of the furnace property. The Delaplane Furnace, near Windsor Castle, was operated for nearly a hundred years from the time of the Revolution. The Keim Furnace was situated a short distance north of Hamburg. There are still several mills in the district.

The borough of Hamburg lies in this township.

Windsor Castle is three miles southeast of Hamburg. The post office was established in 1856. The creamery at this place was at one time one of the most important in the county.