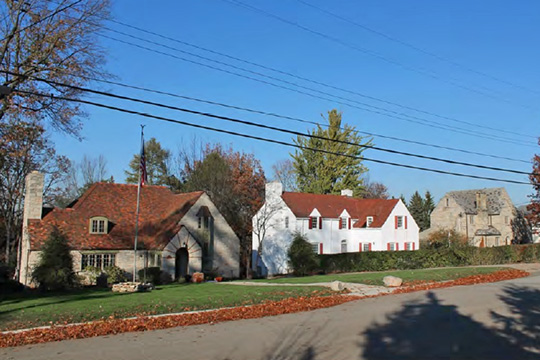 The Mt. Lebanon Historic District was listed on the National Register of Historic Places in 2014. Portions of the content on this web page were adapted from a copy of the original nomination document. [‡]

Beginning in the early 1900s, many of Mt. Lebanon's residents joined in a campaign supporting the construction of a traffic tunnel leading from Pittsburgh through Mt. Washington to the South Hills to improve access and support development. "A total of at least six separate tunnel projects were proposed and contemplated before the county finally decided in 1919 on the current site of the Liberty Tubes." The competing interests of different South Hills communities, land speculators, and businessmen resulted in a "geographical partisanship" that manifested in the creation of organized lobbying groups including the South Hills Board of Trade (1908) and its splinter group the South Hills Tunnel Association, which sponsored the alternative that would best suit Mt. Lebanon's interests.

In anticipation of the opening of the Liberty Tunnel, Mt. Lebanon transformed itself into an early automobile suburb. The subdivisions were designed with regard to the automobile. The plans were situated farther away from the trolley line; their designs incorporated driveways and garages; and their success depended on eventual access to the city by automobile. In 1921, the Mission Hills plan was laid out as an elegant response to the question of how to design for automobile-dependent residents. Based on the nationally lauded design of J.C. Nichols' same named plan in Kansas City (now part of the incorporated City of Mission Hills, in Kansas), this plan with curving streets that tame the contours of a steeply sloping site, broad vistas, parks and common areas, generously scaled lots, and a rich variety of historic revival houses built primarily of brick and stone is not simply a copy of a good idea. The Mission Hills plan, and many others in Mt. Lebanon that followed it and learned from it, synthesized those principles into highly successful designs that were tailored to their locations. The Mt. Lebanon Historic District provides a rich, layered, and nuanced example of a superlative early automobile suburb.

The creation of new roads for automobiles beginning in the 1900s led to suburban development over a wider area of greater Pittsburgh than was influenced by the railroads or trolleys. In addition to the Liberty Tubes, the development of the Lincoln Highway and a system of Grand Boulevards (including the Ohio River, Allegheny River, Mosside, Saw Mill Run, Bigelow, and Baum Boulevards as well as the Boulevard of the Allies) provided easier automobile access from the city to suburbs to the north (Brighton Heights, West View, Aspinwall, Fox Chapel), east (Squirrel Hill, Highland Park, Point Breeze, Churchill), south (Mt. Lebanon, West Mifflin, Pleasant Hills), and west (Sewickley Heights, Sheraden, Thornburg) (Baum and Muller 2006:148). While many early automobile suburbs were developed in the Pittsburgh area in this period, none demonstrate the breadth and scope, the depth and concentration, or the quality and distinction of Mt. Lebanon. The extent of the early automobile suburb in Mt. Lebanon is significant. The historic district provides not merely one or two characteristic residential plans but more than three dozen neighborhoods that include 4,252 resources in a 1,306-acre area. Because the rapid residential development of Mt. Lebanon was concentrated in a roughly twenty year period, new residential planning models that were being created and tested against the needs of the home-owning motorist are prevalent in the historic district without the intrusion of significant earlier development (rural or trolley era) or later postwar suburban development. The high quality of the planning also distinguishes Mt. Lebanon from neighboring communities of the era.

The final historic era of suburbanization concerns Post-World War II and Early Freeway Suburbs, 1945 to 1960. Called "the most dramatic stage of suburbanization in the United States," these postwar subdivisions were "fueled by increased automobile ownership, advances in building technology, and the Baby Boom" as well as nationwide highway construction. Mt. Lebanon continued to grow rapidly during this period, but the housing plans from this era do not feature the singularity of the earlier plans from the 1920s and 1930s. They tend to follow national patterns and models and have been excluded from the historic district boundary. The postwar era saw the rapid suburbanization of communities like Moon Township in the west (whose growth was spurred by the establishment of the Greater Pittsburgh Airport and an interstate highway link to the City of Pittsburgh); Ross Township, Allison Park, and Springdale in the north; Monroeville, Penn Hills, and Wilkins Township in the east; and West Mifflin, Upper St. Clair, and Bethel Park in the south.

The rapidity of the development of the area, the distinction of the residential plans, and the subsequent care and preservation that the Mt. Lebanon Historic District resources have received demonstrate the singularity of the district. In 1912, there were only six registered automobiles in the township, but by 1934 there were 3,966 cars. The population of the township increased by almost 500 percent within the ten year period from 1920 to 1930, easily outpacing other South Hills communities. A 1944 discussion of local housing issues stated that only 7 percent of the houses then standing in Mt. Lebanon were built before 1920. Nationwide, the 1920s experienced increased construction of housing. "Housing production peaked in 1925, and by the end of the decade, when a new economic crisis forced the cessation of construction, an average of 703,000 new dwellings a year had been built." The increased housing construction and rapid development of suburbs during this period is often attributed to the advent of the automobile and improved road systems; the movement of the population caused by industrialization during World War I; and the availability of home financing through local building and loan associations. For Mt. Lebanon, the opening of the long awaited transportation link to Pittsburgh, the promise of clean air away from the city, and the growing wealth of Pittsburgh's industrialists and business elite were additional influences on the growth of the suburb.

The Mt. Lebanon Historic District's significance is demonstrated by the active engagement of a variety of residential developers who shaped the early automobile suburb. Foremost among them is Lawrence T. Stevenson, who drew on the automobile suburb model developed by J.C. Nichols in Mission Hills, Kansas and adapted it to the terrain and circumstances of Mt. Lebanon. In a statement from 1925, Nichols explained that "residential streets should be planned as to eliminate alleys, follow the contour of the land, be fitted to the lots and blocks, afford sites of interesting shapes, and permit individual landscape treatment. They should preserve and reveal vistas, creating street pictures ... Building lines should not be uniform, but should be varied according to site and view; blocks should be treated as a unit; and, wherever possible, harmonious group planning and collective building should be carried out. Residence streets should have a cozy, domestic character, be quiet, self-contained, garden-like."

Stevenson's real estate development firm Stevenson, Williams and Johnston Company was incorporated in 1919 with offices in downtown Pittsburgh, where "a business strategy was mapped out that would take the company to its present location in Mt. Lebanon. These three men agreed that the future lay within the rich, wide-open farmlands to the south of the city." Stevenson was a community builder, who laid out the influential Mission Hills plan in 1921 and the Beverly Heights plan in ca. 1925. In 1927, the firm relocated to Mt. Lebanon's Uptown business district. Stevenson remained active in the industry and served as the president of the Pittsburgh Real Estate Board, as the president of the National Association of Real Estate Boards in 1932, and as a presidential appointee to help establish a central discount bank for home mortgage financing during the Great Depression. Another community builder was W.A. Bode and Company, which developed the Parker Gardens and Sunset Hills (which lies outside the historic district boundary) residential plans. James Duff served as the developer of Mt. Lebanon's Virginia Manor plans, which were built in phases from the mid-1920s through the 1930s, before serving as Pennsylvania's Governor and a United States Senator. Mt. Lebanon was also reshaped by resident-developers, local landowners who laid out subdivisions and often invested in land speculatively in advance of the opening of the tunnels in order to capitalize on the anticipated influx of home buyers. Mary Haller was a resident-developer. As a local businesswoman, she purchased the Hood farm and laid out the Hoodridge plan of lots with her sons in the mid-1920s.