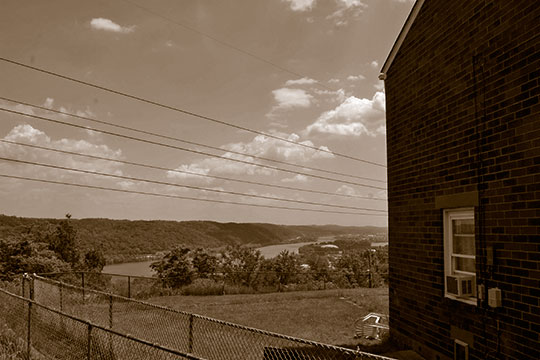 Prior to World War II, Moon Township was a predominantly rural community with only a few scattered houses and farms. Although the construction of roadways and railroads—such as the Sewickley Bridge, which was originally constructed in 1911, and the Pennsylvania & Lake Erie Railroad—improved access between the township and downtown Pittsburgh, Moon would not develop as a suburban bedroom community until the postwar boom of the 1950s. [1]

Moon's location emerged as strategic to the war effort as the United States mobilized for war in the early 1940s. The industrial infrastructure of Allegheny County converted rapidly to war production, and the massive build-up of the region's military capabilities created an acute need for civilian labor. In response, thousands of workers migrated to the area to take positions in the mills and factories. Moon Township's undeveloped acres were located in close proximity to busy steel mills in Aliquippa and Coraopolis and to the Dravo shipbuilding plant on Neville Island, making it a crucial location for war production. The provision of adequate nearby housing for defense-industry workers was considered essential to the war effort. The construction of the Mooncrest Workers Housing Development therefore supported the mobilization of United States industry for World War II.