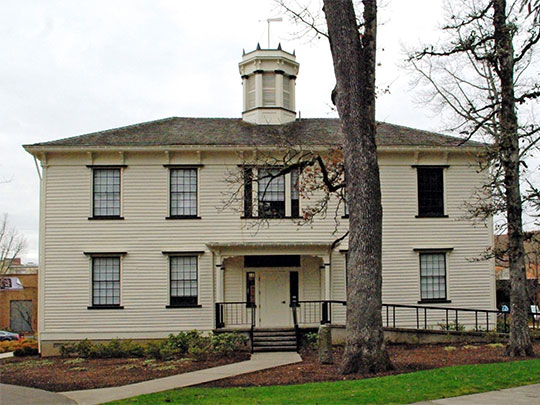 Washington County, created in 1843, is one of the four original counties created in Oregon. It was first known as Tualaty County but the name was changed in 1849 in honor of President George Washington.

The Tualatin Valley contains over one-third of the area of Washington County, historically important, because under the name of Tualaty, it was one of the four original districts of the old Oregon of pre-territorial days. Then it comprised all of northwestern Oregon and western Washington. But the county's far-flung confines contracted as the region developed, until today [1940], its area is 731 square miles. Before 1830, the valley was alive with brown beaver, a rich field for the Hudson's Bay men. The trappers in their quests through the region noted its rich soil. A few years later, when men of fashion abandoned the beaver fur hats they had put on by a king's decree, many of the trappers came to the valley with their Indian wives and settled down to an agricultural routine. Several of the trapper-farmers lived to become influential figures in Oregon's Territorial epoch. [1]