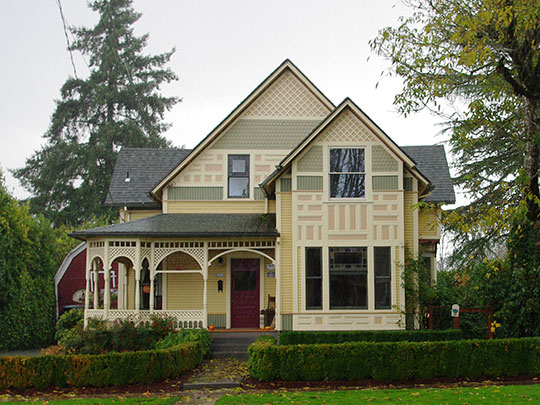 Forest Grove lies on a commanding elevation at the western border of Tualatin Plains. Because of its grove of white oaks, with fir forests as a background, the founders gave it the name it bears. As the seat of Pacific University, one of the oldest institutions of higher learning in the Northwest, the town has a distinctly academic atmosphere. The college traces its origin to a log cabin school established in 1845 by the Reverend Harvey Clark and Alvin T. Smith. Mr. Clark and Mr. Smith had started a school in the rude log church house of the settlement. A year later they were joined in their efforts by Mrs. Tabitha Moffet Brown, who at the age of 66, accompanied by an aged relative, had driven her own team of oxen across the plains. Entirely alone, she and her uncle had crossed the Cascades by the difficult Applegate route and had reached her goal practically penniless. Later, when she was visiting at Tualatin Plains, the idea of a boarding school occurred to her. In 1847, with the aid of her friends, she opened classes in the log church. Her original idea was to establish a school for orphans. Soon her boarding school was attended by the children of settlers, and the idea became an institution.

The building erected in 1850 to house the Tualatin Academy is still in use and is now Science Hall. The building has a charming exterior design. In spite of the necessary frugality of the period, the designer surmounted it with a graceful bell tower, marking it as an institutional building. Its hand-hewn timbers gave it permanence and it is known as the oldest structure still in active use for educational purposes west of the Mississippi River.

The first "class," graduated in 1863, was Harvey W. Scott, later editor of the Portland Oregonian for half a century. The Academy's existence is due to the interest taken in it by some of America's most outstanding men, who gave it both time and money. In the list were Henry Ward Beecher, Edward Everett Hale, Edward Everett, Rufus Choate and Sidney and Samuel F. B. Morse.

In the southern part of town near the sawmill of the Carnation Lumber Company, is the early home of Alvin T. Smith, who assisted in the establishment of Pacific University.