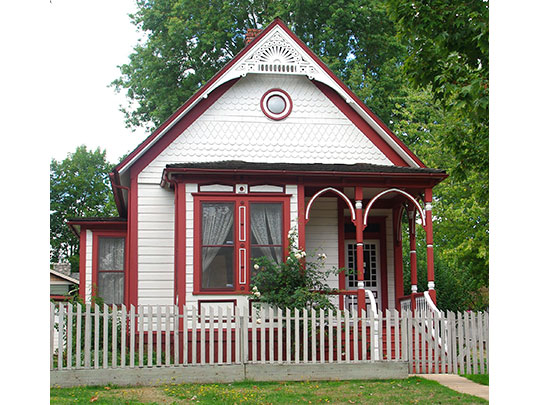 The City of Tigard was incorporated in 1961.

Wilson McClendon Tigard (b. 1826), for whom Tigardville was named, was one of the area's earliest settlers. After the White River overflowed its banks and washed out the spring planting on his Arkansas farm in 1852, Tigard emigrated to Oregon with his wife and infant son, John Wesley (b. 1850), his mother, a brother, Andrew Jackson Tigard; and two sisters. Soon after his arrival in Oregon, Wilson Tigard settled his 320-acre donation land claim south of the present-day central business district of Tigard. The Tigard claim was cleared so that potatoes and other vegetables could be raised for family consumption. Later, fruit trees and grains provided a varied diet, and always there were animals needed for farm work and sustenance. Each family had a large barn for livestock and hay storage. Around the turn of the century hops were grown as a commercial crop, and a hop drier was built. After the Portland Public Market opened in 1910, surplus fruits and vegetables as well as dressed chickens and rabbits were sold in Portland each Saturday by the second generation of Tigards. Farming was the principal occupation of the families in the area.

John Wesley Tigard, the only one of Wilson Tigard's ten children to have crossed the plains in the emigration of 1852, had been born on December 25, 1850, near Fayetteville, Arkansas. Upon reaching The Dalles of the Columbia in Oregon, in October, 1852, Wilson Tigard bought two sections of land in Washington County from a man named Mathews. The Tigard home was built on Tigard's holdings, presumably when the elder Tigard's oldest son and heir was first married in 1880.

In 1881, John Tigard's first wife, Emma Ornduff, bore a son, Frank. Two years later another son was born to John and Emma Tigard. John maintained a coach route to Portland for a time, and for a brief time owned a store in Fulton (south Portland). In 1892 John Tigard married Sophia Schmidler, who later burned to death beside her stove in the house. Following the death of John Tigard due to a highway accident on April 7, 1931, the house continued to be occupied by Tigard's third wife, Ervilla Shaw Tigard.

Wilson Tigard had helped build the area's first school, which was attended by all the Tigard offspring. Charles Fremont Tigard, younger brother of John Wesley Tigard, was born February 15, 1862. He also lived in the community all his life. With his mother's aid, he established a store on a corner of the family property. From 1886, a post office was maintained in a corner of the store. In 1892 a larger store was built across the road. In it an upstairs hall was used for lodge meetings, a polling place, etc. The area's first telephone service, inaugurated February 7, 1901, connected this store with the community of Beaverton. Later, Charles Tigard helped to organize a Mutual Telephone Company. Charles Tigard also was a member of the East Butte Grange, built on land donated by his father, and he was president of the Grange Fire Relief Association. He was also president of the First Bank of Tigard, later purchased by the U.S. National Bank of Oregon, and he was active in the Commercial Club which promoted construction of the community's first sidewalks. Though his own formal education ended with the need to help clear the road to Portland after a windstorm in the winter of 1880, he was a strong supporter of education and served on the school board, gave the dedicatory address when Tigard's first high school was opened in 1926, and was commemorated in the naming of C. F. Tigard Elementary School.