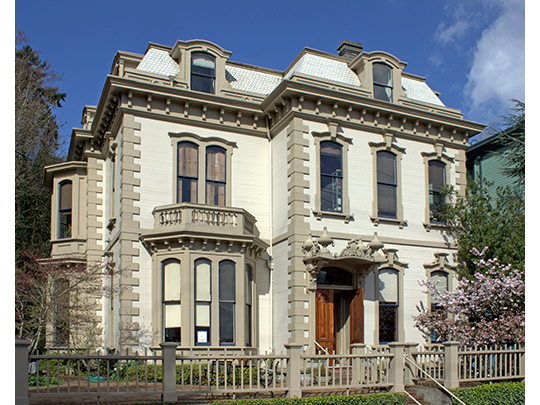 The Jacob Kamm House was listed on the National Register of Historic Places in 1974. Portions of the content of this web page were adapted from a copy of the original nomination document. [‡]

The Jacob Kamm House, removed from its original site in 1950 and now located at 1425 SW 20th Avenue in Portland, is the earliest and one of the finest examples of the French Second Empire (or General Grant Baroque) style of architecture extant in Oregon. Built in 1871 by Jacob Kamm, a prominent shipbuilder, it is not known if the architect was A. E. Jordan or W. W. Piper, though the house has many characteristics in common with Piper's work. L. Therkelsen was the builder. Very popular in the East from the mid-1860s, the Second Empire style is somewhat uncommon in Oregon.

Though it appears to be of masonry, the 2-story house is built of carefully-fitted wood with wooden quoins at the corners and a string course-like band between the first and second floors. Windows floors are surrounded with architraves which project in the low relief and have a molded "arched eyebrow" cornice with a large keystone inset. Sills are supported on several brackets. The arched windows are double-hung, solid panels with exterior lowered shutters. The 1‑story bay window on the east-facing front has a bracketed cornice and a ballustrade, and there is a 2-story bay window on the south side with a bracketed cornice on the first level and a matching molded but unbracketed cornice on the second. The transomed double front door has a cantilevered and bracketed arched-eyebrow portico with engaged urns against the wall of the house, free standing urns on the outer corners, and an antefixa centered on each of the three open sides.

The whole of the asymmetrical mass is surrounded by a plain frieze on which are set volute brackets supporting the projecting molded cornice. The cornice is surmounted by a low molded parapet into which are set arched-eyebrow dormers which are flanked by volutes. The dormers protrude from a straight-sloped mansard roof which is capped by a small, molded cornice. The exterior retains its original appearance.

The interior of the Kamm house has been greatly altered. Though the plan is much the same as the original, most of the woodwork and architectural detailing is from other notable Portland structures now demolished. Most notable is the burled ash panelling from the great hall of the Knapp house, a block-sized, Stick Style house erected in 1882 and demolished in the 1950s. Carved oak lobby pilasters, dated 1889, and leaded glass are from the Portland Hotel, designed by McKim, Mead and White, also demolished in the early 1950s. In addition, the ornamental ironwork from the courtyard of "The Portland" is now installed around the front perimeter of the Kamm house.

In addition to being the earliest surviving and one of the finest examples of Second Empire Baroque architecture in Oregon, the Kamm house was Portland's first "mansion" and long remained one of Portland's most prominent houses. Built in 1871 on a 14-acre tract of land outside the city limits, by the turn of the century it was on a 14-acre island of greenery in the heart of the city. It was also the first house in the city to be centrally heated, Kamm having installed a ship's boiler to provide steam heat. In addition, the house had a sort of "air conditioning" system which brought cool air from the basement and released it through ornate, round cast iron vents near the ceilings of the rooms. The piping for this system is still intact though it does not work.

Jacob Kamm was born in Canton Glarus, Switzerland in 1823, the son of a Swiss army officer. When he was 8 years old, his father resigned his commission and the family emigrated to America; his father dying in New Orleans of yellow fever when Jacob was 12. When he was 14 he journeyed to St. Louis and began work as a cabin boy aboard a steamboat. Learning the mechanics of the engines he was granted a license as engineer at the age of 20. When he was 26, poor health and the discovery of gold in California lured him to the West. Kamm discovered he could make more money as a steamboat engineer than as a miner and accepted a job on the Sacramento River. Lot Whitcomb, who was promoting the town of Milwaukie, Oregon, an early rival of Portland, hired John Ainsworth as the captain and Kamm as engineer for a steamboat he wanted to build on the Willamette River. Kamm installed the boilers and machinery using tools he had forged by a local blacksmith. They ran the steamship Lot Whitcomb on the Willamette and Columbia Rivers carrying passengers and supplies until the ship was sold in 1854.

While practically his whole life was devoted to navigation, Jacob Kamm also participated in non-transportation ventures. He was at one time vice-president of the United States National Bank of Portland and also a prominent stockholder in other Portland banks. His interests extended to Astoria where he was an important factor in the building of that community. He was president of the First National Bank of Astoria and a large land owner. He also possessed valuable property in San Francisco and Portland.

Scheduled for demolition in 1950, the Jacob Kamm house was purchased from the wrecker by a Portland preservationist and removed to a temporary site where it stood for a while before, after many complications, it was located at the present site. It was opened as a restaurant in 1955 but was forced to close several years later.