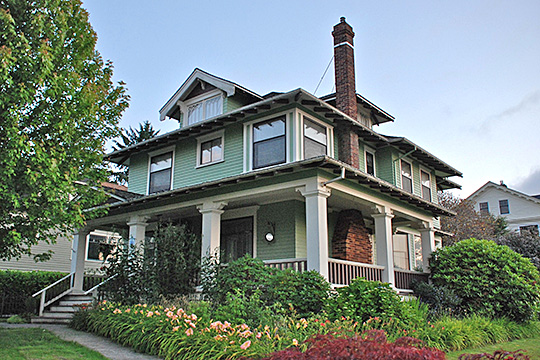 Established as a fur trading post in 1811 by John Jacob Astor, Astoria was destined to become the "Emporium of the West." Here, within the boundaries of the district, is a National Landmark Site marking the beginning of United States history in northwest America. Europeans and Americans, as well as Native Americans, had traveled or camped near the site long before 1811, but it was the arrival of the Astor party which spurred a permanent settlement here. For thirty years Astoria was little more than a clearing in the woods. In the 1840's, settlers arrived with their families and made claim to the land. The city that grew from Astor's dream remains, but on a less grandiose scale. Twice devastated by fire, Astoria's downtown is a well preserved, early twentieth century commercial district. It retains a variety of period styles designed by local architects and Portland interests including five individually listed National Register structures.

Its founding was based on a commercial enterprise and has operated continuously as a commercial area since the 1840's. The founding of Astoria established the beginning of American life in the Northwest and is one of a few settlements to have been jointly occupied by the British. By 1844, Astoria had established itself as the county seat. While the original courthouse has long been demolished, the current county courthouse is located at the end of Astoria's busiest commercial street. In 1848, President Polk recognized the burgeoning development of the Columbia River and initiated the West's first customs service in Astoria. The customs house has been in Astoria's downtown since 1861.

The significance of Astoria's maritime roots is also tied to the founding of Astoria by fur traders who shipped beaver pelts around the world. Today, those connections are made through a handful of waterfront buildings constructed for ship chandlers, boat repair, and river and bar pilots-an occupation at least as old as American and European trade on the Columbia River. In addition, Astoria's proximity to the Columbia River is both a visual and audible connection to its maritime history. Ships pass only a stone's throw from the downtown historic district street terminus. The blast of a ship's horn reverberates throughout the area.