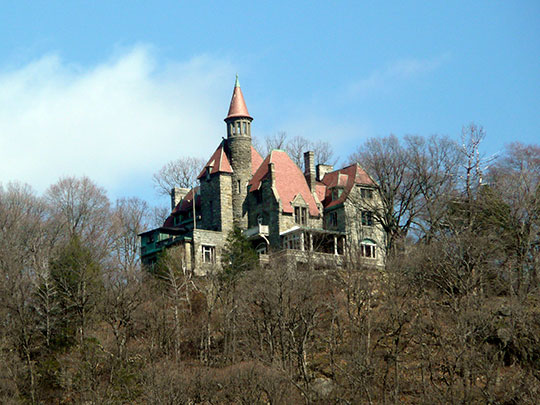 Putnam was erected wholly from Dutchess, June 12th, 1812; and was named in honor of Major-General Israel Putnam, who was stationed for some time, during the Revolutionary war, in the lower part of this county, and at Peekskill in the county of Westchester. It is bounded northerly by the county of Dutchess, easterly by the State of Connecticut, southerly by the county of Westchester, and westerly by the Hudson river, which separates it from the counties of Rockland and Orange. Its area is about 216 square miles. Its population in 1840, was 12,825; and in 1845, 13,258. It contains six towns, viz.: Philipstown, Putnam Valley, Southeast, Carmel, Patterson, and Kent. It was originally called the South Precinct of Dutchess county, and about 1740, the Fredericksburgh Precinct, embracing the whole of Putnam. As early as 1772, the present town of Philipstown, including Putnam Valley, was erected in a precinct, by the name of "Philipse Precinct;" and, in 1773, the town of Southeast was organized as a separate precinct, by the name of the "Southeast Precinct." This left in the Fredericksburgh Precinct, only the towns of Carmel, Kent, and Patterson. By the Act of March 7th, 1788, the terms precincts were dropped, and "Philipse Precinct," was called Philipstown; "Southeast Precinct," Southeast town; " Fredericksburgh Precinct," Frederick's town.

Philipstown is named in honor of the Philips family, a member of which patented the whole of this county; Frederick's town, in honor of the Christian name of Capt. Frederick Philips, who inherited one third part of it, and Southeast, from its geographical position with respect to the other towns.

The geographical shape or figure of this county, is a geometrical rectangle, having its angles right angles, without having its sides equal. It stretches, like a garter, from the Hudson to the Connecticut line; being, in a straight line, about twenty miles in length, and twelve in breadth. Carmel and Patterson were organized in 1795, from Frederick's town. This left Frederick's town embracing only the now town of Kent, which name was given to it about this time, in honor of the Kent family. Patterson, in 1795, was organized by the name of " Franklin," in honor of the old revolutionary philosopher and patriot; but, in a few years thereafter, it was changed to Patterson, in honor of the family of that name, who were early settlers there. Putnam Valley was erected in 1839, by the name of "Quincy," after the town of that name in Massachusetts, wholly from Philipstown; but in 1840, the name was changed to the one it now bears.

The eastern part of the county is uneven and hilly, vet very productive, and under a high state of cultivation. The central and western portions are broken by high hills and mountain elevations. The Highlands stretch across its west end, casting their sombre shadows on the noble river, that laves its western boundary. They are estimated at 1,500 feet above the level of the Hudson. Through the central Highlands, run two valleys, called Peekskill and Canopus Hollows; and between them and the Hudson lies a beautiful vale, called Pleasant valley, extending from the Westchester to the Dutchess line. The mountain slopes and valleys are productive and well-cultivated. The Muscoot river, with the east and west branches of the Croton, are the only streams of any importance. There are several brooks and creeks, which furnish sufficient water power, for the milling purpose of the country. Iron is found in abundance in the mountains; and, though "bleak and barren, as appear these rock-ribs of earth, they are the repositories of exhaustless wealth, which requires but the hand of industry, to unlock and scatter to the world."

This county was patented in 1697, by Adolph Philips, a merchant then residing in the city of New York. As shown by the Patent, it included "Pollepells Island," and contained more land than is now embraced by this county. Adolph Philips, or Philipse, as it was formerly written, was a bachelor, and an uncle to Capt. Frederick Philips, deceased; and great uncle to Mrs. Mary Gouverneur, of Highland Grange, Philipstown. Previous to this time, a brother or cousin to Adolph received a patent for a tract of land in Westchester county, "originally comprising not less than 20 miles square, bounded West by the Hudson, and lying south of the mouth of the Croton." This patent was granted to Frederick Philips, in 1680.