Photo: Row Homes in the Hawley-Green Historic District, Syracuse, NY. The Historic District was listed on the National Register of Historic Places in 1979. Photographed by User:Sirjasalot (own work), 2006, [cc0-by-1.0 (creativecommons.org/publicdomain/zero/1.0/deed.en], via Wikimedia Commons, accessed June, 2013. 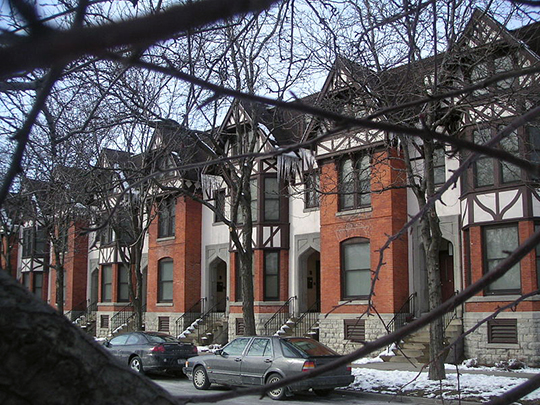 The Hawley-Green Street Historic District was listed on the National Register of Historic Places in 1979. Portions of the content on this web page were adapted from a copy of the original nomination document.[1]

The Hawley-Green Street Historic District is located on the near northeast side of the city of Syracuse. It consists of approximately fifty structures, primarily residential, located along parts of Hawley and Green Streets and the adjoining side streets of McBride, Howard, and Lodi. Neighborhood commercial services are located at the intersection of Catherine, Green, and Hawley.

Parking areas on Wayne Street, which runs parallel to Green, border the district on the north. High densities of deteriorated and heavily altered structures, along with scattered modern intrusions encircle the The Hawley-Green Street Historic District on the south, east, and west. The Hawley-Green Street Historic District is thus one of the only relatively intact residential areas on the northeast side of the city.

Practically every popular style of the nineteenth and early twentieth centuries is reflected in the Hawley-Green Street Historic District. A few modest Greek Revival homes survive from the 1840-50 era such as 220 Hawley Avenue, a two-story, two-bay clapboard cottage. Most early homes of modest proportions in this vicinity, were replaced by 1900. The matching brick Beadle houses at numbers 300, 304, and 306 Hawley Avenue, and 308 Hawley Avenue (also a Beadle House), are good examples of the Italianate style.

The more impressive buildings in the Hawley-Green Street Historic District are located on the north side of the two hundred block of Green Street. A massive multi-storied Queen Anne (numbers 216-218) with a large cylindrical tower, was built in 1890 for an area congressman. Down the street at 201-203 Green, is a palatial brick and stone Romanesque residence with Eastlake porches and a polygonal tower. In 1895 the two opposing candidates for mayor occupied the two halves of the building. Next door at 209 Green Street, a Second Empire style residence, possibly designed by Horatio Nelson White, a well-known Central New York architect, features a mansard roof and elaborately molded window heads.

Perhaps the most interesting building in the Hawley-Green Street Historic District, both architecturally and historically, is Greenway Place. Built in 1882, on the site of the Greenway Brewery, the structure was comprised of 14 units easily delineated on the rear elevation. The units were originally built in the Second Empire style and sold individually. Tudor style facades replaced the original one in the twentieth century and currently there are approximately 60 rental units. Their construction was an earlier signal of a change from owner to tenant occupancy. Numbers 225-231 and 226 Hawley Avenue, both one-story modern buildings, do not conform with the rest of the The Hawley-Green Street Historic District, and are judged intrusions.

The Hawley-Green Street Historic District reflects the growth of the city of Syracuse with its blend of architectural styles dating from the early nineteenth to the early twentieth century. Modest rowhouses such as Greenway Place, as well as palatial mansions along Green Street indicate that the area accommodated a wide range of income groups. Today, after years of deterioration and neglect, partly due to the scarcity of owner-occupied buildings, there is a growing concern for neighborhood rehabilitation demonstrated in the restoration of the Beadle Houses and 209 Green Street.

The structures and neighborhoods within the Hawley-Green Street Historic District reflect a variety of economic classes, ethnic heritages, and functions in close proximity. The first settlers were Irish and German immigrants as well as native-born Americans who came to the area enmasse in the early 1850's. Typically, the first homes were of modest frame construction or, for the wealthier, brick with Greek Revival details. During the first decade the community was in rapid transition, with many residents changing their homes and occupations every one or two years. Another wave of development swept through the community in the 1870's, as it became more affluent. This stage bypassed the area south of Green Street, but Green Street and the blocks to the north gradually accommodated politicians, lawyers and doctors among other professionals. The intense development during the late nineteenth century can be traced to the establishment of street car and later, trolley lines which ran down Hawley to Green, up Green to Lodi and then north on Lodi. Contiguous land values rose at a more rapid rate than did property with poor access to the trolley line; thus individuals whose jobs took them into the center of the city were attracted to Green Street, while local laborers and merchants would live elsewhere away from the thoroughfare.

During the last fifty years many of the larger residences have been broken up into apartments, and even the smallest homes are often not owner-occupied. In the process most houses have had rear additions and new entrances on the side or front installed. The vogue for front porches around the turn of the century has also resulted in changes to some of the buildings in the district. Recently there has been an awakening of community pride, which is reflected in some exterior restorations.