Photo: Homes along Pleasant Street, within the Manlius Village Historic District, in Manlius, New York. The Historic District was listed on the National Register of Historic Places in 1973 Photographed by user:User:Doncram (own work), 2009, [cc-by-3.0 (creativecommons.org/licenses/by/3.0)], via Wikimedia Commons, accessed June, 2013. 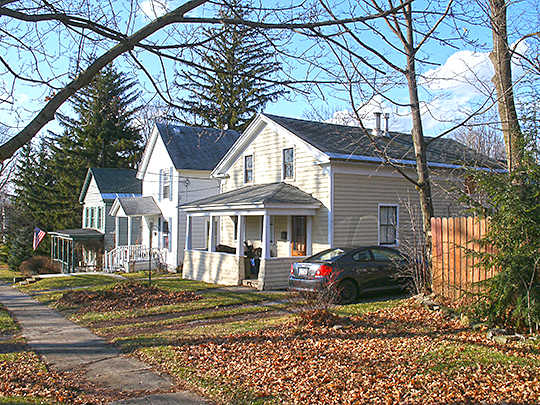 The Manlius Village Historic District was listed on the National Register of Historic Places in 1973. Portions of the content on this web page were adapted from a copy of the original nomination document. [1]

Most of the buildings in the Manlius Village Historic District face either Seneca Street, the original Seneca Turnpike, or Pleasant Street which parallels it to the North. The Pleasant Street residences tend to be less grand than those prominently sited along the old turnpike.

Like many villages Manlius shows several distinct periods of active construction within this district. The first phase came around the time of the village's incorporation in 1813 and included Smith Hall (the Masonic Temple), #501, #417, and #314 Seneca Street, #105 and #113 North Street, #112 and #113 Franklin Street, #501 Pleasant Street, and Christ Episcopal Church on Seneca Street.

The Greek Revival influence was brought in on the second wave of construction beginning in the 1830's which included #503 Seneca Street, #311, #309, #308, #306 Pleasant Street, the Old Baptist Church and the Vasto commercial block on Seneca Street.

#316 Seneca Street (St. Ann's Convent) and #500 Seneca Street are the clearest architectural representatives of the 1850's and 60's, and then the 1880's brought the bandstand in Academy Park as well as the filling between earlier houses along Pleasant Street. The only major twentieth century structures in the Manlius Village Historic District are the brick neo-Federal First Baptist Church (1929) on North and Pleasant Streets and more recently the Bell Telephone Building (1970) and St. Ann's Church (1969). St. Ann's Church on Seneca Street is irregularly shaped to fit an unusual site facing Academy Park and like the brick and concrete Bell Telephone Building at 105 Franklin Street it is frankly contemporary in style and yet shows some sympathy in scale and character to the overall village qualities.

Several distinctive architectural themes and types recur within the Manlius Village Historic District possibly indicting the hand of a common builder or craftsman. The three brick buildings with stepped gables — #134 Seneca Street (St. Ann's Rectory), Smith Hall (the Masonic Temple) and #105 North Street (the Wattles-Van Schaack-Barnes House) form a striking complex in the center of the Manlius Village Historic District. They were all built within three years of each other (1813-16), and then Smith Hall was enlarged in 1824 to provide a third floor meeting room when the Masonic Lodge first occupied the building. The lodge room still has murals depicting symbolic Masonic scenes; these are said to have been painted early in the nineteenth century by an itinerant painter by the name of Fish. The paintings were later covered by wallpaper and were rediscovered in 1902. #314 Seneca Street and #105 North Street are similar in layout, a main two-story three bay wide section with an attached one-story two bay wide wing. Centered in the stepped gable, both houses have a small oval window.

The front facade of #105 North Street has four slender pilasters, another recurring feature found on a number of houses in the Manlius Village Historic District. Unlike the brick #105 North Street, the other four houses with front pilasters are frame usually clad with flush boarding. #501 Pleasant is thought to be the earliest constructed of the group (c.1810) and like #105 North Street the pilasters are linked with flattened arches. #501 Pleasant Street is the only house of the group with pilastered facades to have a centered front door and a nearly flat roof. #501 Seneca Street, #113 North Street, and #112 Pleasant Street, the other houses of this type all have off-center doorways and are turned gable-end to the street.

The Episcopal (1813) and Old Baptist (1827) Churches on Seneca Street have both been through a number of vicissitudes in the past 150 years. Christ Episcopal Church with its magnificent steeple looks as if it belongs on a lofty site on top of a hill, and in fact it was moved from the crest of the Seneca Street hill to its present site in 1832 The Church has been "gothicized" in the mid-nineteenth century with pointed windows and yet the interior still has the stark undecorated quality of an early nineteenth century church. Bluntly abbreviated due to the loss of its steeple, the Old Baptist Church on Seneca Street has been converted into a bookstore. The church that superseded it when constructed in 1929 is within the Manlius Village Historic District on North and Pleasant Streets.

#316 Seneca Street (St. Ann's Convent) is an elegant square Italianate house. In a district of predominantly frame buildings it joins its neighbors #314 (the Rectory) and Smith Hall as one of the few brick buildings.

Stone is an even rarer material in the Manlius Village Historic District. #417 Seneca Street is the only surviving limestone structure and it is camouflaged under a coat of stucco. It was originally a store and is now a house. Across the street on the site of the present St. Ann's Church stood a stone commercial block, and throughout the Manlius Village Historic District are a number of stone hitching posts and mounting blocks.

The village of Manlius, born in the heyday of the turnpike era, has been by-passed by later transportation routes, and the area contained in the Manlius Village Historic District retains much of the flavor of the village's origins.

Two famous early nineteenth century New York State turnpikes met in the heart of the Manlius Village Historic District. The present day Seneca Street is the old Seneca Turnpike leading west to Canandaigua, and Academy Street is the old Cherry Valley Turnpike running from Albany through Cazenovia. At the turnpike intersection (now Academy Park) the inevitable tavern was among the first structures to appear near the future site of the Christ Episcopal Church. Scattered houses and then a commercial block on the site of the present day St. Ann's Church were built and the crossroads became known as "Liberty Square."

Manlius was incorporated in 1813 in the same year as the villages of Buffalo and Binghamton. To the west of Manlius only Geneva and Oswego had been already granted similar powers by the state to govern themselves. Syracuse, the neighboring city which has long since dwarfed Manlius, was still swampland in 1813 and did not come into existence until the construction of the Erie Canal in the 1820's.

The preponderance of early nineteenth century buildings (notably: Smith Hall, #314, #417, #501, #503 Seneca Street, #306, #308, #309, #311, #501 Pleasant Street, #105 and #113 North Street, #112 and #113 Franklin Street, Christ Episcopal Church, the Old Baptist Church and the Vasto Block) illustrates this golden period of village prosperity due to the turnpike trade. These elegant survivors with stepped gables or pilastered facades were built for merchants, attorneys, investors, doctors, and even the newspaper publisher, but the Manlius' heyday was soon over. Alternate forms of transportation — canals, railroads, and in the most recent years the New York Thruway — all bypassed Manlius and at the same time infringed on the former importance of the old turnpikes. Because it was bypassed, Manlius has had relatively little concentrated development since the mid-nineteenth century, and thus retains much of the flavor of the turnpike era to which this small Onondaga County village owes its existence.