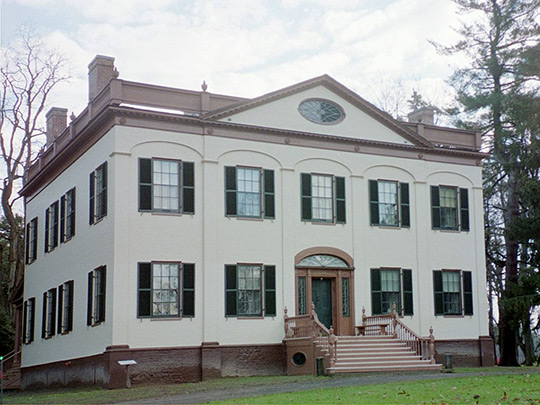 Cazenovia is located in the central part of New York state along Route 20, a major highway running east-west. The village is situated above the fall line of the Niagara escarpment and surrounded by steep upland grades. Cazenovia Lake forms the northwestern boundary while Chittenango Creek curls around the southern and eastern edges of the village.

Situated south of the Erie Canal, Cazenovia never became a large commercial or industrial center, as did neighboring cities of Utica and Syracuse; instead it remained relatively small and isolated. The population now numbers about 3,000 people, bolstered annually by students of Cazenovia College and summer residents. A serenity and timelessness pervades the village, reflected in its quiet tree-lined streets, carefully maintained nineteenth-century residences, and homogenous Victorian period commercial blocks, largely undisturbed by modern improvements.

The Village was founded in 1793 as a Holland Land Company venture by John Lincklaen. The original street layout of the Village, its relation to the lake, and the location of early houses, Village parks, hotels, and churches are all essentially intact and reflect the earliest decisions of its founders. Historically, Cazenovia has evolved from its initial industry of mills and manufacturing companies along its waterways and as a farming community that utilized the rich agricultural soils throughout the Town. In the mid-1800s Cazenovia "settled into the mold of an established country town, prosperous, but not flamboyant." The presence of "its cool summers, pleasant scenery, and sparkling lake waters offered an ideal attraction for sweltering residents of Syracuse and the large eastern cities seeking a vacation spot." (Village of Cazenovia Comprehensive Plan, 1991) Wealthier families purchased lakeshore land and built "summer cottages". On its western edge were the larger holdings of founders and community leaders while mills and other industries developed on its eastern boundary, taking advantage of the waterpower potential of Chittenango Creek.