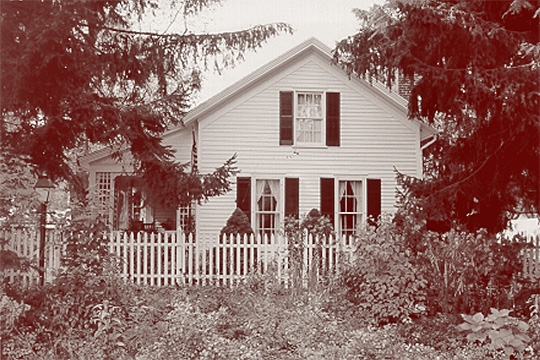 The Browncroft Historic District was listed on the National Register of Historic Places in 2004. Portions of the content of this web page were adapted from a copy of the original nomination document. [‡]

The Browncroft Historic District is located in the southeast quadrant of the City of Rochester, approximately 3 miles from the downtown center on the Genesee River. The district boundaries incorporate an area unified by an intact historic designed landscape, including properties with the highest degree of architectural integrity and historical significance within the Browncroft neighborhood. The domestic architecture of the district is represented by predominantly large-scale, single family houses associated with national architectural styles popular during the period ca. 1914-1929, including the Colonial Revival, Tudor Revival, Dutch Colonial Revival, Craftsman, and Prairie styles, as well as several notable examples of eclectic design. Contributing resources built during this period as part of the Browncroft subdivision include a number of houses designed by the prominent local architectural firm of Gordon & Kaelber.

The Browncroft subdivision, of which the district is predominantly comprised, developed eastward from the western boundary, Winton Road, starting in 1914. The earliest houses built were architect-designed for the individual lot purchasers in conformity with the subdivision design standards.

During the 1920s, quality builder houses began to fill the sold-off lots. The builder house designs conform with the overall subdivision scheme calling for "modified colonial revival and Georgian style" and Tudor revival, and reflect popular models in these styles which can be found scattered throughout the district, as well as in other residential developments of the period in the City of Rochester and its inner-ring suburbs.

Though most of the builder houses in the subdivision are in the modified colonial, Georgian and Tudor revival styles, there are two clusters of generic Foursquare houses—one on the north side of Dorchester Road just east of Gramercy Park, and one on the south side of Corwin Road near Gramercy Park. The district also retains four vernacular farmhouses that pre-date the period of large-scale residential development, and reflect the nineteenth century agricultural and horticultural history of the area.

Accommodations for automobiles include detached garages at rear of lots. Garages are usually single bay and located in accordance with deed restrictions that stipulate the location of the garage. The narrow-width driveways in the district are often curbed.

Within interior streets, the district is unified by the historic designed landscape, which extends the length of the original subdivision, even where houses were not built until the post World War II period.