Photo: Victorian home in the Ditmas Park Historic District, Broolyn, NY. The Historic District was listed on the National Register of Historic Places in 1983. Photographed by User:Kiva93 (own work), 2009, [cc0-by-1.0 (creativecommons.org/publicdomain/zero/1.0/deed.en], via Wikimedia Commons, accessed June, 2014. 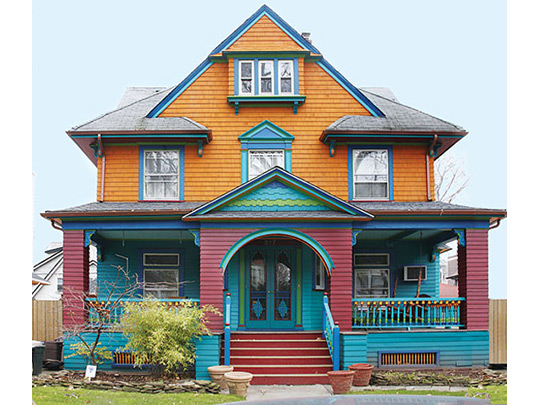 The Ditmas Park Historic District was listed on the National Register of Historic Places in 1983. Portions of the content on this web page were adapted from a copy of the original nomination document. [1]

The area was laid out originally with individual lot sizes of approximately 50 x 100 feet, a standard for this type of development at that time. Because of this limited area, the individual lots have no special distinguishing landscaping features. However, numerous trees were planted along the street malls of the original development and these have now matured, with their foliage and shade enhancing the area.

Most of the houses in Ditmas Park Historic District are eclectic in form and ornament although there is a heavy emphasis upon the use of colonial or neo-classical detailing.

Outstanding among the eclectic houses of Ditmas Park are the Thomas H. Brush and George Van Ness Residences (George Palliser, 1899) at 1000 and 1010 Ocean Avenue, which combine such classically inspired details as Georgian quoins, splayed lintels, Palladian windows, a Federal entrance way and oval windows, and a Roman Corinthian temple front. Most of the houses of Ditmas Park use colonial neo-classical ornament forms in an even freer manner. A fine example of this is the house at 463 East 19th Street designed by Slee & Bryson in 1902, with its columnar porch, corner tower, brick and shingle siding, and bay windows. These elements and variations of them can be found on numerous homes throughout the Ditmas Park Historic District. East 17th Street contains the following excellent examples: 455 East 17th Street (A. White Pierce, 1902) with its recessed loggia flanked by Ionic piers in the gable; 460 East 27th Street (Charles Gastmeyer, 1902) with its paired Doric porch columns; 484 East 17th Street (Arlington D. Isham, 1902) with its combination of Queen Anne and Colonial Revival style details. On East 18th Street, the Colonial Revival detailing is best represented by number 465 East 18th Street (Arlington D. Isham, 1904) with its Doric porch columns and its central dormer framed by piers; and number 498 East 18th Street (architect unknown, c.1900) which has an angled bay trimmed with dentils and a Palladian window with curved balcony. Ditmas Avenue contains some of the grandest and most elaborate manifestations of these eclectic residences. Number 1700 Ditmas Avenue (architect and date of construction unknown) is one such house. This large residence has an octagonal corner turret with a finial and round-arched panels over the tower windows which are ornamented with wreaths. Number 1890 Ditmas Avenue (Arlington D. Isham, 1904) is similar in its elaborate style with a rounded corner tower topped by a conical roof and finial.

Related to these neo-Tudor designs are houses that incorporate forms borrowed from medieval English cottages. The finest example of this style is the Arthur Ebinger residence (Frank Forster and R.A. Gallimore, 1931) at number 445 East 19th Street with its quaint gables, windows, terrace, chimneys and undulating pseudo-thatch slate roof.

The other type of house found within Ditmas Park Historic District is the Bungalow, with the main concentration of these being located on East 16th Street between Ditmas and Newkirk Avenues. Number 494 East 16th Street (Arlington D. Isham, 1908) exhibits many typical characteristics of Bungalows including a broad sloping roof that sweeps over the porch, deep eaves, stylized oriental brackets, battered enframements, window and door moldings set at the same level, and multi-paned windows. These and related typical Bungalow features can be found on other buildings in the style such as numbers 510, 549 and 519 East 16th Street, all designed by Arlington Isham in 1909.

Besides residences, there is one church building within the Ditmas Park Historic District, the Flatbush Congregational Church at number 1802-06 Dorchester Road. The building is a neo-Georgian brick church (Louis Jallade, 1910) with a Doric temple front of stone, a pediment with a multi-paned roundel window, a tall wooden tower with a square base and an octagonal lantern with a small dome. The neo-Georgian taste is also represented in residential architecture by the house at 900 Ocean Avenue (Charles G. Ramsey, 1910).

While there are no intrusions in Ditmas Park Historic District, four houses have non-historic additions. These include: numbers 1602 East 16th Street, 1700 Ditmas Avenue, 1711 Newkirk Avenue, and 900 Ocean Avenue.

Ditmas Park Historic District is historically and architecturally significant as an intact representative example of an early twentieth century suburban development in Brooklyn. Developments of this type (of which Prospect Park South and Tennis Court are other, slightly earlier examples) were built on many of the old farms of Flatbush at the turn of the century. They represent one of the major trends in American architecture and planning at that time — that is, the development of landscaped suburban areas laid out on a street grid in the urban manner and built up with single-family houses that reflect an eclectic use of design forms and stylistic details. Ditmas Park was developed primarily between 1902 and 1914 by realtor Lewis Pounds and his associate Delbert Decker, although contributing structures that embody similar design features and were built respecting the original landscape plan were built in the area until 1940. Most of the designers who worked in Ditmas Park were local Brooklyn or Flatbush architects, including Frank J. Helmle, Arlington D. Isham, John J. Petit, Benjamin Driesler, and Slee & Bryson. The exception to this was the Boston architectural firm of Allen & Collins, responsible for the design of the Ditmas Park Historic District's only non-residential building, the Flatbush Congregational Church. In developing this area, Lewis Pounds did the initial grading and landscaping and imposed firm restrictions on the sale of lots and construction of homes to maintain a high quality suburban section. Much attention was given to softening the urban grid with trees and other foliage. Houses were set back behind wide lawns and small sidewalk malls were planted with numerous trees, which have now matured and add to the uniqueness of the neighborhood. Through his efforts, Pounds achieved a residential section which was visually cohesive and which has retained its special character through the present day.

The dominant architectural style in Ditmas Park Historic District is eclectic. The buildings are characterized by the use of a wide range of historical forms and details from eighteenth and early nineteenth century American buildings such as clapboard and shingles, dormer windows, hipped and peaked roofs and neo-Classical details picturesquely arranged in a manner clearly derived from Victorian taste. The houses are frequently asymmetrical with interesting and unexpected architectural details, their designs often of high quality. Mixed with the predominant eclectic style are examples of neo-Georgian, Bungalow and neo-Tudor style designs.

The neo-Georgian residences used Colonial and neo-Classical forms such as peaked roofs with pedimented dormers, keystones and columns in a more historically precise fashion, with a more formal, symmetrical massing and arrangement. The neo-Tudor style became increasingly popular for suburban homes at the turn of the century and usually included such features as pseudo half-timbered gables, brick or stucco siding and leaded windows. The Bungalow was a form of housing which gained widespread popularity in the early twentieth century. Bungalows were seen as easy and inexpensive to build and thus, the ideal form for the middle-class family. The most notable feature of the exterior of the Bungalow is the broad, sloping roof, often with deeply projecting eaves supported by either projecting purlins or framed brackets. Other common Bungalow features are wood shingle siding, battered window enframements, multi-paned windows, heavy porch posts and subtle, Japanese-inspired ornament. The only non-residential building in the Ditmas Park Historic District, the Flatbush Congregational Church, was also designed in the neo-Georgian style.