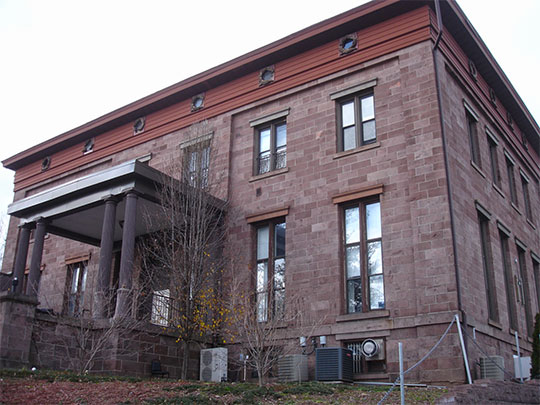 On April 4, 1678, a Dutch settler and trader, Mr. Hartman Michielsen (later Vreeland), purchased a "great island in the river of Pasaick near by Aquickanucke by the Indians called Menehenicke (translation of the Dutch from the original deed)." The island came to be known as Dundee Island and today that area is known as Pulaski Park and Dundee Island Park. Between 1679 and 1684-1685 deeds and patents were acquired between the original settlers and the native Americans, the Lenni-Lenapi, that secured for the original settlers the land including and surrounding modern day Passaic. In October of 1693 the Township of Acquackanonk was created in the northern part of Essex County. In February of 1837 the County of Passaic was created from parts of northern Essex and western Bergen County. In 1854 the Village of Acquackanonk took the name of the river that it bordered, Passaic. By the late 1860's the Village of Passaic was steadily growing in population and commercial and residential size. This growth was mostly due to the completion of the Dundee Dam and Dundee Canal in July of 1861. The vastly enlarged and now abundant fresh water supply became the basis for the industrial boom that would fuel Passaic's rapid growth. Coincidentally, between April 2, 1873 and exactly five years later, a series of Acts, enacted by the Village of Passaic, terminated in its incorporation as a city. The last half of the nineteenth century and that part of the twentieth century before World War I were great growth years for Passaic's numerous factories, mills and mom and pop businesses. The population growth during this time was over ten fold and peaked in the 70,000's during the decade after World War I.

Some of the more memorable factories/mills that attracted and employed a vast majority of Passaic's citizens were The Botany Worsted Woolen Mills, The Forstmann Woolen Mills, Passaic Cotton Mills, The Gera Mills, The McLean Cotton Mills, Brighton Mills, The Waterhouse Mill, The Acherson & Harden Manufacturing Co., The Okonite Company, The Pantasote Company, U.S. Rubber Company, Manhattan Rubber Company, Paterson Parchment Paper Company, J.L. Prescott Company, Reid and Barry Co., Passaic Print Works, The Dundee Power and Water Company, The Falstrom Company, Pitkin & Holdsworth Company, Jacques Wolff & Company and many more too numerous to mention but all equally important. Passaic has always been a city of immigrants and always will be. After the original Dutch settlers of the latter seventeenth century, came the English, the Scottish, and a small but varied mix of mostly Western Europeans following the American Revolution. The first half of the nineteenth century saw the arrival of the Germans, Irish, more English, Scandinavians, Austro‑Hungarians (i.e. those from the former Austro-Hungarian Empire which included Ruthenian, Slovak, Polish, Ukrainian, Russian, Hungarian and other heritages) and a mixed group of political emigres from all over Europe. The latter half of the nineteenth century saw the arrival of more Germans, Irish, and a small influx of African‑Americans, mostly former slaves. The last fifteen years of the nineteenth century saw the beginnings of the great waves of immigrants that would populate Passaic and all other industrial cities in America.

Large numbers of immigrants came from Italy, Germany, Russia, Ukraine, Poland, Austria-Hungary, and lesser numbers came from virtually every other county in Europe and points beyond. After World War I Passaic saw a migration of Southern Blacks to our city, as did most other industrial northern cities. After World War II, Passaic saw an influx of Puerto Ricans, the first Hispanic group to come to our city in any numbers. In 1956, during the Hungarian revolt, many Hungarians came to Passaic to join their relatives and friends. Since the 1970's many Hispanic immigrants from Central America, South America, Mexico and the Caribbean Island countries have chosen Passaic as their home, to make a new start and share in the "American Dream." As I have stated before, we will always be an immigrant city. The religious history of Passaic is as diverse as any great city in the world. The Dutch (Protestant Reformed) came here first in 1685, then in the middle years of the nineteenth century came the Methodists, the Episcopalians, the Presbyterians, the Protestants, the Catholics, (both Eastern and Western Rite), the Eastern Orthodox, the African Methodist Episcopalians, the Baptists, the Jews, the Lutherans and a host of other religious denominations that more often than not were originally part of the afore-mentioned groups.

The population of the City of Passaic started along stretches of the Passaic River for the obvious reason of transportation. As the city grew in size, the first population concentration was in the area of Prospect Street and Main Avenue as this was close to the landing and beginning in 1831 the newest mode of transportation was the railroad (horse drawn until 1834). With the advent of waterpower for the factories the city needed to expand its housing stock for its citizens, so in rapid order the Eastside or Dundee section quickly filled up. Towards the end of the nineteenth century the current First and Fourth Ward areas started to build up. The Hill Section of Passaic, the homes of the captains of industry and the wealthy, stared to spring up in the middle 1870's and peaked by the end of the first decade of the twentieth century. The Second Ward area of the city started to rapidly develop in the beginning of the twentieth century and became a predominately Italian and Jewish area until the end of the 1940's. The Third Ward was the last to physically develop as it was "too far" from the rest of town to be desirable. Today, Passaic, a city of 3.25 square miles of which 1.25 square miles is parkland is a very densely populated city, especially in its First, Second and Fourth Wards.