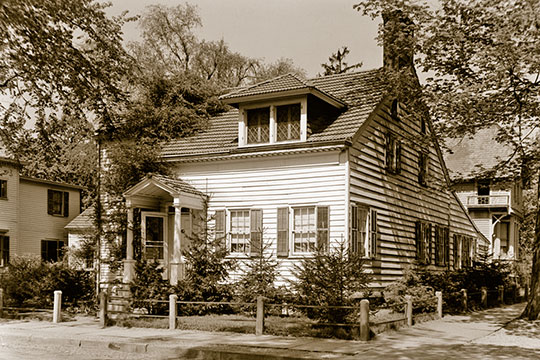 The Morristown Historic District was listed on the National Register of Historic Places in 1973. Portions of the content on this web page were adapted from a copy of the original nomination document. [‡] .

The Federal buildings are no more than half a dozen in number and include:

Macculloch Hall was built in 1810 and added to in 1819 by George Perot Macculloch. Evidence suggests that the 1810 section was incorporated into a yet earlier stone building. The 1819 addition was an academy room for young men. The house is an excellent example of the Federal period style.

What is now [1973] the Book Store, built in 1786, is an excellent example of brick Federal architecture in the New Jersey area. The date in the gable end is somewhat unusual for the northern section of the state.

Victorian structures are by far the most common within the Morristown Historic District. The private structures are nearly all quite substantial homes indicating the owners stature in society. Certain foreign influences are evident in many of these houses owned by well traveled retired career officers of the United States Armed Forces.

The religious structures within the Morristown Historic District are mostly Gothic Revival style.

The 20th century buildings are the municipal building, the post office, St. Peters Church, and the Morristown Library, to name a few.

The Morristown Municipal Building was erected by Theodore N. Vail (though he never occupied it) and was given to Morristown for municipal purposes. Vail was founder and first president of AT&T (from 1900-1920). He formed the organization into the largest private business in the world. He also established Bell Laboratories, an industrial research center.

The importance of the southern section of the Morristown District centers around Macculloch Hall, "built by George Macculloch.

Macculloch is credited with conceiving the idea and implementing the construction of the Morris and Essex Canal in 1825.

George Macculloch conveyed his home to his son-in-law Jacob W. Miller in 1856. Jacob Miller, lawyer, was elected to the State Assembly in 1836, the State Council (Senate) in 1842, and as a member of the Whig Party he was elected a United States Senator in 1840. He was reelected in 1846.

One of the Senator's sons, Lieutenant Commander Henry W. Miller, graduated from the Naval Academy in 1852 and preceded to serve faithfully in the Navy, seeing action during the Civil War. As a citizen Miller was a banker, President of the Morristown Bank (1881-1904), and Mayor of Morristown in 1880 and 1381, while living in two houses, both of which he built on Miller Road.

A younger son of Senator Miller was Commodore Jacob W. Miller, an 1867 graduate of the Naval Academy. Commodore Miller was secretary of the United States Nicaragua Commission which determined the best canal route across the Isthmus. Miller resigned in 1884, but was reinstated in 1898 during the Spanish-American War. Jacob Miller died in 1918 and was buried in the St. Peters churchyard in Morristown. Jacob occupied Macculloch Hall from 1903 to the time of his death in 1918.

Around the nucleus of Macculloch Hall grew a community of seasoned military veterans drawn to the area by numerous factors. It was an ideal climate, the land was available, and the surroundings were socially compatible and profitable for these career officers.

Christopher Raymond Perry Rodgers (1819-1892), of two distinguished naval families; on his fathers side, Commodore John Rodgers, and on his mother's side, Commodore Matthew Perry. Commodore Christopher Rodgers served in the Seminole, Mexican, and Civil Wars. He was also superintendent of the United States Naval Academy from 1874-1878. His house is at 40 Macculloch Avenue.

General Fitz John Porter (1821-1901), descended from a family of Revolutionary and War of 1812 naval heroes, served in the Mexican and Civil Wars. Promoted Major General shortly after the Civil War began Porter served under General Pope at the second battle of Manasses. Pope had Porter court-martialed for refusing to obey orders. A long controversy reigned over the Court-Martial. New Hampshire, New Jersey, and Pennsylvania passed resolutions in Porter's favor. By 1879 a retrial was held and the inquiry recommended that the Court-Martial be set aside and that Porter be reinstated. The United States Senate passed a bill in 1880 to include Porter on the retired list of the Army. Finally, in 1886, President Grover Cleveland signed the bill reinstating Porter. General Porter came to Morristown in 1865. He became the superintendent of construction of the State Hospital at Morris Plains in 1869. Porter died at his home at 1 Farragut Place, Morristown in 1901.

General Joseph W. Revere (1812-1880) was the grandson of Paul Revere, and son of Dr. John Revere, an eminent physician and medical professor of New York. Joseph Revere, a naval merchant, retired from the Navy in 1849, but joined the Seventh New Jersey Volunteers as a Colonel in 1861. Revere, quickly to be promoted to Brigadier General, served effectively, and, at the end of the war, again resigned from the military and returned to his estate just outside of Morristown (known as "The Willows"). The size of this farm proved to be unmanageable for the weak Revere and, in 1872, he purchased the Sensay House at 17 DeHart Street. General Revere lived here until his death in 1880. His wife died in the house in 1910.

Morristown was the home of the widow of perhaps the most courageous Naval officer in the history of the United States. Commodore Alexander Slidell Mackenzie, from an illustrious military family, hung three men on board ship for mutiny while serving under his command. The ringleader was the son of the Secretary of War.

Numerous other military figures lived around the Macculloch Avenue area. Of lesser rank, or of lesser social status, their histories go unnoticed and unstudied. But any of their homes exist and, therefore, their lives and careers continue to be recognized.

Macculloch Hall was enlarged around 1819 for the purpose of providing neighborhood youths with an Episcopalian education. The room also served as the church for several years.

Jacob Miller, of Macculloch Hall, was a noted local lawyer and was elected to the State Assembly and Senate prior to 1840. In 1840 he was elected a United States Senator from New Jersey. He was reelected in 1846.

At the corner of Miller Road and Macculloch Avenue lived possibly the most influential personality of the third quarter of the 19th century. Thomas Nast, a political cartoonist and satirist, was the motivating factor in the overthrow of the notorious "Tweed Ring" of New York. Nast also created the concepts of the elephant and donkey as symbols of the Republican and Democratic Parties.

Until 1828, services of the Church of England were held in Macculloch Hall and from that congregation St. Peters Church was organized and built. The present building was designed by McKim, Mead and White sometime early in the 20th century.

Morristown formed the Methodist Episcopal Society in 1825. Services were first held in the now demolished Baptist Church at Speedwell Avenue and Park Place in 1827 when the first of three churches was completed. The present church, built in 1866-1877, is in ruins due to a fire. Although the interior was completely gutted plans at present [1973] call for using the shell of the old church and build within.

The Church of the Assumption, built in 1872, and the Rectory next door, built in 1890, have served the Morristown Catholic population for over a hundred years.

The First Presbyterian Church, organized sometime around 1738 when the first church was built, is now a late 19th century Gothic Revival church. Many of the stones in the cemetery date back to the organization of the church in the 18th century. Present building has incorporated many of the old stones used in the original and second churches.

Other noteworthy religious or related structures within the Morristown Historic District are: Church of the Redeemer Episcopal Church, South Street Presbyterian Church and Masonic Temple.

George Perot Macculloch of Macculloch Hall is credited with the conception and building of the Morris Canal. During the summer of 1823, Macculloch gathered data on his proposed route for the canal and in July, Ephraim Beach, a canal engineer, began the engineering work. Construction was begun in 1825 and completed from Phillipsburg to Newark by 1831 and to the Hudson River in Jersey City by 1836. The canal was quite an engineering feat; more impressive even than the Erie Canal, or the later Delaware and Raritan Canal, also in New Jersey.

Macculloch's grandson, Commodore Jacob W. Miller, supervised all of the hydrographic work on the San Juan River and was also appointed secretary of the United States Nicaragua Commission to determine the best route for a canal across the Isthmus, thereby cutting enormously the travel time from the East Coast to the West Coast. Later, Miller was president of the Cape Cod Construction Company which built the Cape Cod Canal.

Witness of the Spirit. Margaret Eckman, 1968.

Thomas Nast, His Period and His Pictures. Albert Bigelow Paine, 1904.