Photo: William S. Townsend House, 96 Delsea Drive, ca. 1820, Dennisville, Cape May County, NJ, northwest of the historic district. The house was the home of William S. Townsend, a prominent merchant, farmer, and community leader in Dennisville. Architecturally, the house is an interesting example of the Vernacular Neoclassical style. The house is part of a well-preserved complex, which included several outbuildings. Listed on the National Register of Historic Places in 1984. Photographed by Jack E. Boucher, 1961, Historic American Buildings Survey [HABS NJ-753], memory.loc.gov, accessed March, 2013. 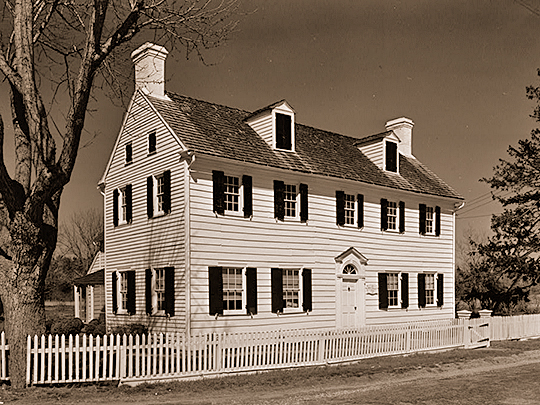 The Dennisville Historic District was listed on the National Register of Historic Places in 1987. Portions of the content on this web page were adapted from a copy of the original nomination document. [‡] .

The Dennisville Historic District is a superbly preserved 19th century village and remains essentially as it had developed by the late 19th century. Although it has had a long tradition of maritime history, the shipbuilding on Dennis Creek and the cedar shingle mining in the swamps no longer survive, but Dennisville continues to reflect the tastes and traditions of the ship captains and boat builders who made their homes in the village. This is the finest 19th century maritime related village in Cape May County.

Confined to a traditional format of 1 and 2 story frame structures, most of the buildings in Dennisville can be defined as either vernacular Traditional or vernacular Victorian in form and style, dating from the mid-18th century to the last decade of the 19th century. The overall level of maintenance is excellent. Together with the simple and tasteful landscaping of the yards, the tree-lined roadways, and the occasional wooden fences, Dennisville is a fine portrayal of conservative 19th century architecture and design.

The Dennisville Historic District is of historical importance because of the ship building and cedar mining activities which took place here in the eighteenth and nineteenth centuries. The prosperity generated by these two industries fostered the capital and divergent population necessary to produce its most significant historic characteristic — its architecture.

The small residential settlement of Dennisville provides a clear progression of the cultural history and development of the area. A steady evolution of the life styles and changing trends are shown through the architecture. Dennisville harbors examples of the vernacular styles of architecture from the eighteenth and nineteenth centuries including samples of Colonial Revival, Federal, Gothic Revival, Greek Revival, Italianate, and Queen Anne periods of architectural styles.

The sea captains were influential in introducing contemporary architectural styles. Their homes were fine examples of vernacular architecture, and helped to supply the area with some gifted builders in the form of ship chandlers. The two most prominent ship chandlers were William Armstrong and Frank Bushell. They both came from Dennis Creek, as Dennisville was known until 1854.

Dennisville contains a historical archaeological site. The site is the location of a former saw mill, built in 1812, and destroyed by a storm in 1909. The saw mill supplied much of the lumber and cedar mined from the area, which was used in construction of both local buildings and ships for which Dennis Creek was noted. The only visible remains left on the site is the mill dam which still controls the water level of Dennis Lake. The dam is now topped by a bridge constructed in 1928, over which Route 47 crosses.

Dennisville has educational and religious historical structures. The Academy, built around 1830, was the first grammar school in Dennisville. The first floor was used for the school, while the second floor was a lyceum used for religious meetings. When the building was no longer used as a school, it became the town library until 1970. The Dennisville United Methodist Church, built in 1870, was the first Methodist Church in the county.

Eighteenth century accounts of Dennisville are limited. Known as Dennis Creek prior to the mid-19th century, land deeds indicate the Ludlam family owned substantial holdings in the area before and after 1750. Property assessments for Upper Precinct (Upper Township, Dennis Township, Ocean City, and Sea Isle City) in 1774 record less than 140 families in the entire region. Over twenty of these inhabitants lived in the Dennis Creek area. David Johnson and Thomas Ludlam were co-owners of a saw mill near the village. There were only two other saw mills identified. Thomas Gandy was the only merchant cited.

A decade later, just following the American Revolution, there were only 187 assessed properties, twenty-six in the Dennis Creek area. Again, David Johnson owned a saw mill; now possibly in partnership with Richard Stevenson.

The first settlement at Dennisville was on the south side of Dennis Creek in 1726 by Anthony Ludlam. Ludlam's brother, Joseph, founded what is today the main settlement on the north side of the creek a few years later. The town owed its early success primarily to its strategic location and fine port facilities. Ideally situated for regional trade, Dennisville eventually became the leading port of Cape May County and, for a number of years, the busiest south of Camden. In the 19th century Dennisville was one of the leading commercial centers in the region as well as one of south Jersey's foremost shipbuilding sites. For over a century shipbuilding was one of the major economic underpinnings in southern New Jersey and a significant factor in the region's cultural development. Dennisville (or Dennis Creek as the town was known until 1854) was the most active center in this industry, though unfortunately there is little physical evidence of it still remaining.

With commercial success as a trading and shipping center and with a well-established industrial base in shipbuilding, the town soon attracted other Pinelands based industries. Lumbering and cedar mining became important local activities. At the turn of the century thousands of cords of wood were shipped yearly to Philadelphia to heat homes and millions of board feet of lumber were eventually shipped throughout the Mid Atlantic area to be used in construction. According to Charles Tomlin (Cape May Spray, 1913), Independence Hall was roofed at the turn of the century with cedar shingles mined in Cape May County and probably shipped via the port of Dennisville.

Perhaps the best indication of the town's regional significance in the 19th century is that it very nearly became the county seat of Cape May. In a public referendum in 1848 Dennisville lost out to Cape May Court House by a scant 89 votes. Its importance as a commercial center and port declined drastically in the 20th century, but the Dennisville Historic District listed on the National Register of Historic Places remains as an accurate reflection of that thriving past.

Fitzpatrick, Helena Way. "Some Old Houses of Cape May County". The Leader, 1951.