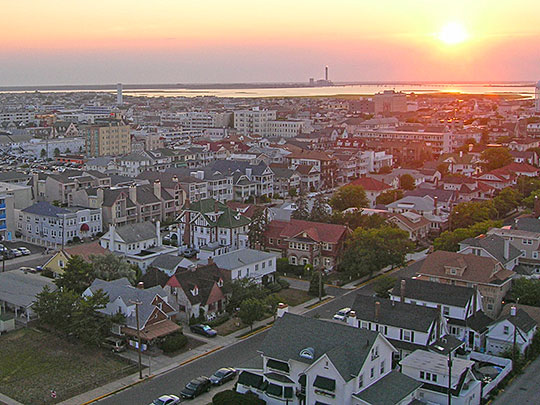 When four Methodist ministers chose Peck's Beach as the site of a camp-meeting settlement, the island, located on the upper coast of Cape May county, was an almost untouched wilderness with its future success only suggested by the attractive seaside location. According to legend, Ezra, James and S. Wesley Lake and William Burrell made a covenant establishing the city on September 10, 1879 near what would become the "Ocean City Tabernacle grounds." The newly formed Ocean City Association began building almost immediately after purchasing a 500 acre parcel of the island from John Somers the following year. Agreeing that the "Grove Association" form of land ownership adopted at Ocean Grove was unsuited to rapid development, the Ocean City founders accepted regular private investments dictated by a set of stringent moral rules. Those abusing the privileges established by the association were forced to give up their land to the governing body.

The layout of Ocean City, however, was like Ocean Grove, developed around a large tree-filled camp ground area, with streets forming a regular grid pattern of standardized rectangular lots. By the end of 1881, 508 building lots had been sold. Just a year after the city's incorporation, a ninety-five room hotel was built on Ocean and 7th Street, overlooking the smaller stores and homes already lining the beach front. Pieces of the Brighton were shipped to the island and assembled on the site 600 yards from the water.

The hotel owners must have anticipated business from the Pleasantville and Ocean City Railroad, which began running between Pleasantville and Somer's Point in 1881. Visitors traveled to Ocean City on the Atlantic Coast Steamboat Company's ferry boats until 1884, when a turnpike and connecting bridges were built from Beesley's Point. Early growth centered around the Auditorium, later known as the Tabernacle, built in 1881 between Fifth and Sixth Streets and Asbury and Wesley Avenues. Even before the permanent wood frame building was completed, the first Surf Meeting drew about 1000 participants who camped in tents on the future Tabernacle site. The Rev. William W. Wood's 1880 report, as the president of the Ocean City Association, anticipated an extensive series of social events that would develop the camp's religious reputation. "Besides the regular services of the encampment, there will be temperance conventions, anniversaries, and other Christian and Philanthropic convocations, fully occupying the season, and making it memorable in interest and profit. That the venture did become popular, as well as profitable, is illustrated by the National Temperance Camp Meeting held there the next year and the association's sponsorship of one and two room cottages. Examples of these "association houses" or "salt boxes" still exist on the island. The tabernacle continues to host "nationally prominent preachers of various denominations" in a 1957 modern brick building on the original site.

Only three years after the city's founding, the first boardwalk was constructed, beginning a long tradition of ocean front amusements. A trolley line with connections by steam boat from Longport brought more traffic to the island between 1893 and 1929. Beginning in 1911, the famous shore fast line connected the Ocean City boardwalk with the Atlantic City boardwalk. Though the original Ocean City walk was packed away during the winter months, a permanent concert hall, the Music Pavilion, drew visitors to year round concerts and other events. After a 1927 fire devastated the boardwalk, the music building was moved to Sixth Street and remodeled to serve as a convention center. The Spanish style, red-tile roofed "Music Pier" overlooking the sea from Moorlyn Terrace accommodated musical performances on the new boardwalk beginning in 1929.' Since the destruction of the original Pavilion by fire twenty-five years ago, the Music Pier continues to be a commanding presence on the boardwalk, hosting a variety of events each year and housing several permanent offices. During the early twentieth century architect Vivian B. Smith contributed two of the city's most significant public buildings, the neoclassical City Hall on 9th and Asbury Streets and the "collegiate Gothic" High School. She was also responsible for the more whimsical Hotel Flanders, still reigning over the boardwalk at 11th Street.

While Ocean City is no longer thought of as a religious resort, it remains a dry town, oriented toward the family. Unlike Ocean Grove, the Methodist shore community it is constantly compared with, Ocean City offers a variety of concession stands, games and stores along the waterfront. A contemporary travel guide calls its boardwalk "the most pleasant, family-oriented one of the entire Jersey shore." Perhaps because of its conscious desire to preserve this reputation, Ocean City manages to absorb the slightly tacky in a liberal assortment of enticements and amusements; the boardwalk shamelessly offers blue cotton candy and arcade games alongside homemade cannoli and Music Pier performances. The used bookstore on Asbury Avenue stuffed with contemporary romance and adventure paperbacks epitomizes the seasonal atmosphere of the place. Downtown, signs thanking tourists for visiting, and five and ten stores equipped with everything they forgot, also proclaim the resort's "family" orientation.