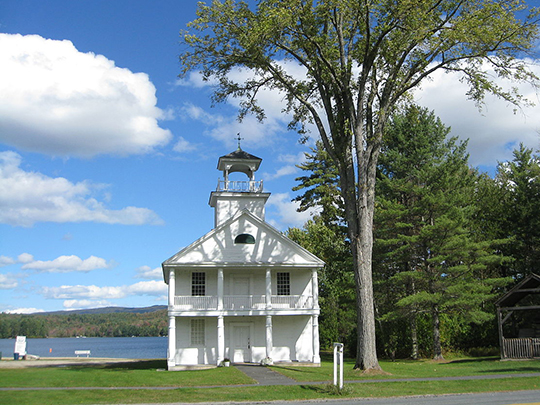 The Canaan Street Historic District [‡] was listed on the National Register of Historic Places in 1973.

Canaan Street (so-called to distinguish it from the late 19th century village and present business center of Canaan several miles distant) was granted by Benning Wentworth in 1761. The grant comprised some 23,000 acres in a parcel six miles square, and most of the original grantees came from the eastern Connecticut towns of Norwich and Colchester. Canaan, located in southern Grafton County, is bounded on the north by Dorchester, on the east by Grange, on the south by Grafton, and on the west by Enfield and Hanover.

In common with other wilderness grants, settlement proceeded slowly at first, and the principal thoroughfare, "Broad Street" was not laid out until 1788. The street (now called Canaan Street) extends for nearly a mile north and south along the west shore of "Hart's Pond" (now Canaan Street Lake) with vistas south to "The Pinnacle" (elevation 1,476 feet) and east to Mt. Cardigan (elev. 3,156 feet). The spatial qualities of the Canaan Street Historic District are unusually fine, and there remain many unbroken vistas east extending to the Canaan Street Lake.

Architecturally, the flavor of the Canaan Street Historic District is predominantly early 19th century, with a sprinkling of earlier and later structures. Apart from the noteworthy survival of open space at various points along the entire Canaan Street, the focal points are the three distinguished public buildings: the Town Hall (1796), formerly the meetinghouse, and one of the earliest surviving structures on the street; the Old North Church (1828), a distinguished Gothic Revival structure; and the Canaan Town Library and Museum (1839), originally Union Academy, an architecturally significant late Federal structure. Interspersed between these landmarks are a remarkably large number of good vernacular residential and commercial buildings, most dating from the first half of the 19th century.

The outlines of the Canaan Street Historic District as it is today took form in the years after 1800, as Canaan Street became a trading and stagecoach center, located as it was on the Grafton Turnpike, which ran from Andover through Canaan to Hanover and Lyme. After the turnpike era ended, Canaan Street was by-passed by the railroad, a fact which doubtless helps to explain its surviving 19th century flavor.

During the second half of the 19th century the Canaan Street became noted as a resort community, with many summer hotels and inns catering to the tourist trade. At one point during this era Canaan Street was said to rival Bethlehem (then pre-eminent among White Mountain summer resorts) in its attractiveness to summer visitors. Many of the pre-existing inns and hotels were enlarged during this period, and a number of new ones were constructed.

Canaan Street, designated a New Hampshire historic district in 1968, has been endowed by nature with an unusually fortunate location, combining distinguished mountain and lake vistas which have, as yet, been little encroached upon by undesirable man-made distractions.

Architecturally the Canaan Street Historic District retains to a significant degree its 19th century character, with a minimal number of undistinguished or nondescript structures of recent origin intruding. Nonconforming signs or modern commercial structure are virtually non-existent, and the relatively large proportion of undeveloped land is a distinct asset in view of the distinguished natural surroundings.

Diagonally across Canaan Street, the Canaan Town Library and Museum (1839) is an unusually distinguished late Federal structure, with double open porches on the facade. The cupola, which shows some Gothic influence, gives the building much of its quality, as does the fact that it is in a fine state of preservation.

At the north end of Canaan Street, the pure Gothic Revival Old North Church (1828), is a perfectly-proportioned and well-preserved example of a popular New England style. Virtually unaltered over the years, the structure is evidence of the considerable talents of Bailey Welch, its builder, whose Gothic tastes were surely avant-garde for rural New England in the 1820's.

The Main Hall of Canaan College, now a large property holder on Canaan Street, was constructed in 1831. At an early date it became Dole's Tavern and was later known as the Lucerne Inn. A Greek Revival structure with an unusual recessed gable above its open portico, the building helps to document two important phases of Canaan's history: the stagecoach tavern and summer hotel eras.

Of the residential structures of the Canaan Street Historic District, the Arvin Tavern (1795), is a worthy example of the late 18th century center chimney Colonial style, surviving examples of which are far from numerous in the area. From the 19th century, the George Harris House (1831) and the Judge William Chase House (1803; are well-preserved examples of the Federal and early Greek Revival styles. The Nathaniel Currier House (1816) is unusual in its apparently original projecting entry "porch," reminiscent of those to be found on earlier buildings.