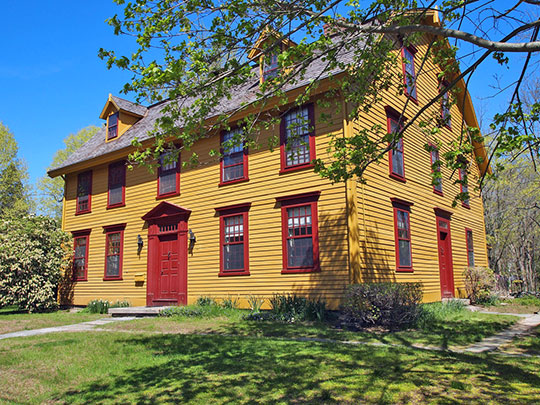 There was little except natural beauty to inspire the pioneers who first tried to wrest a livelihood from the stony soil in colonial times. The Mohegans and the Narragansetts battled desperately for this territory. To Thomas Leffingwell, an ensign from Saybrook, who brought aid to Uncas, chief of the Mohegans, when he was besieged by the Narragansetts in his Thames River fortress in 1645, Uncas gave a deed to the 'Nine Mile Square' on which Norwich was founded. This deed did not convey lands to the south between New London township and Norwich, and the intervening three-mile no-man's land was a source of constant difficulty' for lawyers, settlers and surveyors for many years. A later deed, June 6th, 1659, conveyed practically the same lands to Leffingwell, John Mason, the Reverend James Fitch and others. In the spring of 1660, the Reverend James Fitch led a portion of his congregation from Saybrook into the Norwich lands. Three or four persons joined them from New London, and others came from Plymouth and Marshfield, Massachusetts. The town was incorporated in 1784. Early Indian reservations in the vicinity totaled four or five thousand acres.