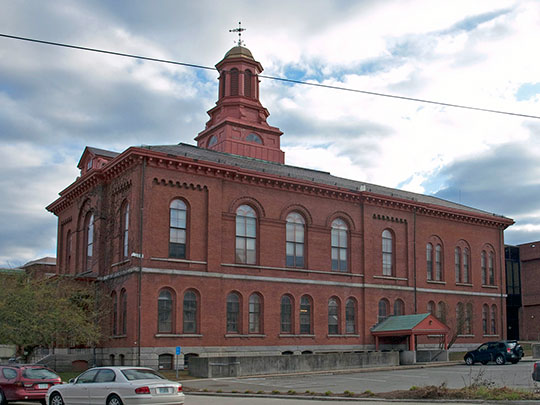 The Cheshire County Courthouse was listed on the National Register of Historic Places in 1978. Portions of the content on this web page were adapted from a copy of the original nomination document. [‡]

The two-story Cheshire County Courthouse located at 12 Court Street, Keene, New Hampshire, rests on a rusticated granite block foundation, some of which was part of an earlier county court records building which occupied the site from 1840 to 1858. Round-headed windows punctuate the wall surface of locally produced brick. The three-bay front (east) facade features an arcaded central entry porch supported by brick pillars and pilasters. A granite belt-course encircles the structure between stories. Second-story walls are pilastered with corbelling in alternate bays. The slate-sheathed hip roof has a bracketed cornice and decorative gable wall dormer on the front slope. An octagonal belfry with louvered openings, gilded roof, and weather vane crowns the structure.

Erected at a cost of "nearly $28,000" by contractor Joel Bullard of Alstead, New Hampshire, the Cheshire County Courthouse remains largely in its original condition. Interior features such as iron window shutters, woodwork, and staircases have been retained, although plumbing and electrical installations have been modernized. A rear vault extension was added in 1911-1912.

Both by its strategic position at the virtual center of the City of Keene, the region's largest community and county seat, and in its formal and even majestic architecture, the Cheshire County Courthouse is symbolic of the role it has fulfilled for 119 years as a seat of county government. It was built in 1858-1859 (the first foundation stones were laid April 26, 1858 at the southwest corner, and it was occupied by the courts March 15, 1859 from plans drawn by the celebrated Gridley James Fox Bryant (1816-1899), the Boston architect who designed numerous works including city halls, jails, court and custom houses, churches and business buildings in his native city and throughout New England and in other states.

The Cheshire County Courthouse is one of the striking focal points of Keene's geometrically oriented cultural, business and economic center. Thought to be the oldest regularly used courthouse in the State of New Hampshire, the building almost ideally illustrates the 19th century concept of a formal monumental style of governmental architecture. Its proportions are in keeping with surrounding structures with which it harmonizes and adds a sense of community stability. The Cheshire County Courthouse not only preserves some of the best of 19th century architecture, fully documented and by a celebrated designer, but it forms a visual link between the period of its construction and the present. It is a vital part of Keene's Central Square.

Samuel Wadsworth. "A Chronological Record of Events Pertaining to the Growth and Development of the Business Section of Keene, Including Central Square & Vicinity..." In Keene, NH, City Government, Fifty-fifth Annual Report of the City of Keene. (Keene, NH, 1928) pp.68-138.