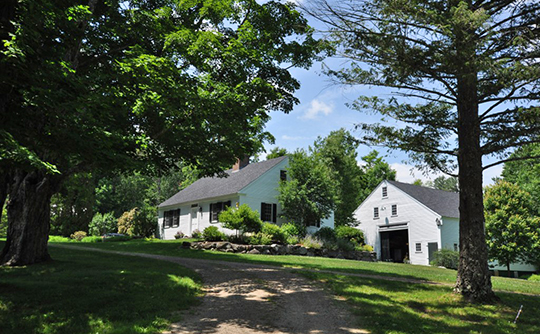 In 1763 the royal governor at that time, Benning Wentworth, granted a group of Exeter residents a charter for a new town — Sandwich — in honor of John Montague, the Fourth Earl of Sandwich. The grantees, or proprietors, were responsible for laying out the town and settling the new residents. The Proprietors formed a Settling Committee which visited the town and discovered the area to be so inaccessible that they appealed to the Governor for additional land. The Governor granted this request, and today Sandwich is one of the largest towns in the state — approximately 94 square miles.

The first settlers arrived in 1767, entering the town from the south through Moultonborough and settling in what is now Lower Corner and Wentworth Hill. Records show that by 1773 there were 204 inhabitants, and by 1790 the population of the town was 905. The first church meeting house (Congregational) was built in 1824, while the first two schools were built in 1800 (Elm Hill School) and 1825 (John Quincy Adams School). By 1830, Sandwich was a thriving community with farms, traders, mills, schools, churches, and local artisans, with a population reaching 2,744, far more than the current population of 1,366 (NH OEP, 2007). Even during this period the primary areas for settlement were Lower Corner, Center Sandwich and the Notch Road. The latter was in part the result of this road being on a primary trade route that was a major link between the Pemigewasset Valley and the Seacoast.

Most of the settled land area in town was devoted to agriculture. The form of the agricultural landscape was directly related to the original town survey that created a rectilinear pattern of land subdivision. Much of the original and current road system was constructed to access these agricultural lots. Today's rural landscape is a reflection of the original agricultural landscape — the layout of property lines, stone walls, fences and fields derive from the original survey. Almost all of the farms were below 1500 feet, and although the most desirable locations were on lower hilltops, such as Wentworth Hill, there were many on relatively steep hillsides in such locations as Sandwich Notch, Mt. Israel, and the Squam Mountains. These farms produced hay, corn, wheat, oats, and potatoes and kept primarily cattle, sheep and hogs.

Closely associated with the agricultural activity were the water powered mills that processed corn and grain produce, wool and timber. At one time there were 36 mills, with major clusters near Center Sandwich and Weeds Mills in North Sandwich.

As opportunities for more suitable farm lands opened up in the mid-west and larger, more efficient mills grew in the larger urban centers of New Hampshire and Maine, residents began to migrate from Sandwich. This out-migration continued until the middle of the 20th century, when the town's population reached low point of 620 in 1960 (US Census).