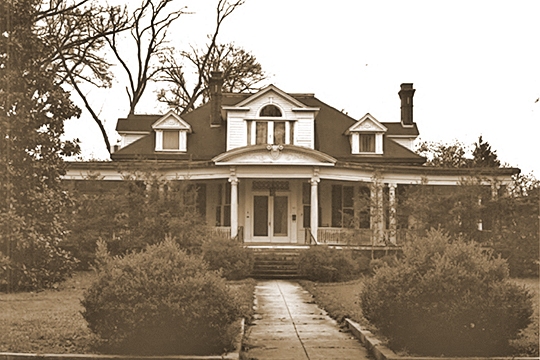 The River Road and Western Downtown Residential Historic District was listed on the National Register of Historic Places in 1986. Portions of the content on this web page were adapted from a copy of the original nomination document. [‡] .

The River Road and Western Downtown Residential Historic District contains a significant group of architecturally and historically important buildings and sites associated with Greenwood's early development and with its later position in the early twentieth century as the center of Mississippi's second great cotton kingdom. Within the district boundaries are the Old Greenwood Cemetery, where the earliest settlers of Greenwood are buried with markers dating to the mid-nineteenth century. Adjacent to the Old Greenwood Cemetery is the Greenwood City Park, originally a cemetery for black residents of the city. Some of Greenwood's most outstanding residential buildings are located within the boundaries of the district and testify to the prosperity of the city in the early twentieth century. 501, 507, 601 River Road and 801 Washington Street are among the city's best expressions of Neo-classical Revival architecture and are individually significant. 613 River Road is perhaps Greenwood's best example of the Prairie Style, and 612 Washington Street is an excellent example of residential Italian Renaissance architecture. Although downtown Greenwood was once densely populated with one-story Queen Anne Style cottages, almost all of these houses survive today as isolated residences and exist as a group only on the 600th block of Washington Street. Other architectural styles represented in the contributing buildings of the district are Colonial Revival, Bungalow, and Tudor. Demolition activity in Greenwood has centered primarily on residential buildings downtown with the result that the historic downtown residential neighborhoods have been considerably reduced in size and are now separated from the central commercial area by parking lots and intrusive new construction.

Two elements within the district, the Old Greenwood Cemetery and the Greenwood City Park (formerly a black cemetery) are associated with the pre-Civil War period of development. Most of the contributing elements were constructed during the cotton boom period from about 1890 to the eve of World War II. Some of the most architecturally significant residences were constructed on the eve of the Great Depression. Although not quite fifty years old, houses constructed through the depression years up to World War II are listed as contributing buildings, if they maintain the character established by earlier buildings in the district. For example, a Tudor or Spanish Eclectic house constructed in the late 1920's is not easily discernible from a house of the same style constructed in 1938.