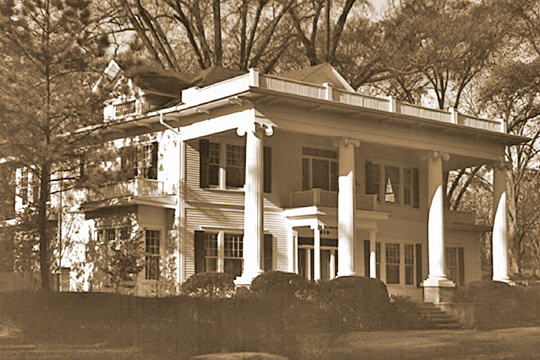 The Grand Boulevard Historic District was listed on the National Register of Historic Places in 1986. Portions of the content on this web page were adapted from a copy of the original nomination document. [‡] .

The Grand Boulevard neighborhood is situated on a flat plain of land bordered on the south by the Yazoo River and on the north by the Tallahatchie River. The district boundaries, however, are shortened by commercial intrusions at the Boulevard's southern end and by new construction of residences, a church, and a school at the northern end. Due to the interruption of new construction, the last property at the northern end of the Boulevard is being nominated individually in the Greenwood Multiple Resource Area nomination. Eastern and western boundaries have been determined by the character of the buildings in the neighborhood with the purpose of including the highest possible concentration of contributing pre-World II residences.

The streets in the district are laid out in a grid plan with the wide divided boulevard serving as the district's central trunk. The streets are all well shaded by formal street planting and by large trees in the lawns of the individual properties. The formal street planting of oak trees dates to the development of the subdivision around the turn of the century. The overall structural density of the Grand Boulevard Historic District is lower than in any other district in the city. The density is higher on the cross streets where the houses tend to be cottages, and lower on the Grand Boulevard, where the residences are larger and often constitute estates with landscaped grounds and outbuildings.

The architectural character of the district is early twentieth-century with the district containing one of the city's two finest Tudor Style residences at 1102 Grand Boulevard. Greenwood's most ambitious Spanish Eclectic residence is the Bledsoe House at 1012 Grand Boulevard. The Provine House at 313 Grand Boulevard and Bellashon at 805 Poplar are two individually significant Neo-Classical Revival residences. Houses in the district are brick, frame, and stucco with no preponderance of any one building material. Ornamentation is derived principally from the use of multi-light and patterned window sash, quoining, lattice, decorative use of brick and stone, turned columns, leaded glass, brackets, and knee braces, tile roofs, decorative ironwork, and turned baluster railings. Colors vary throughout the district with white the preferred trim color on brick and frame houses. The condition of the buildings throughout the district is excellent with few exceptions. No-buildings are deteriorated and only about five residences would be considered to be in fair condition. Alterations are not extensive in the Grand Boulevard Historic District, although at least one building has been inappropriately brick veneered, some have vinyl, asbestos, or aluminum siding, and several residences suffer from loss of porch detailing. The greatest threat to the character of the Grand Boulevard is intrusive new construction. The boundaries of the neighborhood were reduced due to intrusive construction at the southern and northern ends, and the one intrusion within the district boundaries is the Pseudo-Colonial North Greenwood Baptist Church which is overpowering in scale and has surrounded itself with parking lots. Its growing parking needs could threaten adjoining historic resources. One historic house has been moved from the Grand Boulevard to a location north of the Tallahatchie River, and at least one major house has been demolished.

The Grand Boulevard Historic District is Greenwood's largest and most architecturally significant residential neighborhood and reflects the prosperity of the city as it became the Center of Mississippi's second cotton kingdom. The significance of the neighborhood is based on the overall high quality of the District's architecture on the architectural integrity of its buildings, on its beautifully landscaped setting which is dominated by a wide boulevard shaded by massive oak trees, and on the number of individually significant residences within its boundaries. Located on the northern side of the Yazoo River, across the river from the Cotton Row Historic District, the Boulevard Subdivision stretches northerly to the Tallahatchie River which forms its northern boundary. Beyond the Tallahatchie are the cotton fields of the Delta plantations. The neighborhood was a planned residential subdivision developed by Captain and Mrs. Samuel L. Gwin , who purchased the land in the late 1890's. Mrs. Gwin was responsible for the avenues of oak trees that today provide abundant shade for the Grand Boulevard and most of its cross streets. Within the district boundaries are Greenwood's finest examples of Spanish Eclectic, Tudor, and Prairie Style residences, as well as some of the city's finest examples of Neo-Classical Revival and Colonial Revival. Throughout the district, especially on the Cross Streets, are good representative examples of Bungalow, Spanish Eclectic, and Tudor cottages. Architects H. M. White and George Mahon designed at least two of the residences in the Boulevard Subdivision, and local architect Frank R. McGeoy is documented as having designed 810 Grand Boulevard, Both White and Mahon were from Tennessee and McGeoy came to Greenwood from Tennessee. The reliance upon Tennessee architects testifies to the close ties of the Mississippi Delta region to Memphis, considered the northernmost city of the rich Delta plantation land.

Significance of the District dates from the late 1890's, when the land for the Boulevard Subdivision was purchased, through the cotton boom era until the beginning of World War II. The expansion of Greenwood's cotton economy which began with the development of the federal levee system at the end of the Civil War, continued until the Great Depression signaled a decline that was immediately reinforced by World War II and the mid-twentieth century synthetic fabric boom.