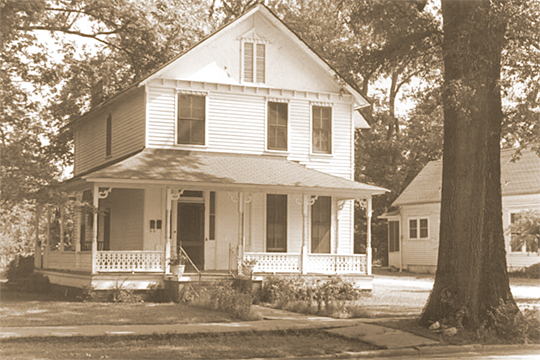 The Williams Landing and Eastern Residential Downtown District was listed on the National Register of Historic Places in 1986. Portions of the content of this web page were adapted from a copy of the original nomination document. [‡]

The Williams Landing and Eastern Residential Downtown District is bounded naturally on the north by the Yazoo River and on the northeast by Pelucia Bayou. Front Street, is not actually a street but rather a sidewalk running along the top of the levee. The district is bounded on the east and southeast by railroad tracks and by a group of dwellings at the dead-end of Washington Street that were omitted from the district due to age. The eastern and southern boundaries are arbitrary and based on the character of the properties in the neighborhood. The streets within the district, except for Front Street, are laid out in a grid plan and some retain their brick paving. Streets have abundant shade either from oak street trees or large shade trees in the yards of properties. Only the easternmost extremity of the district, where the neighborhood begins to become commercial, lacks large shade trees. The structural density of the Williams Landing and Eastern Downtown Residential District is typical of the overall structural density of the downtown residential neighborhood, where no residential estates exist to lend any park-like character to the District. The only spaces within the district boundaries are the river bank area, which is landscaped only in front of one property on Front Street, and one vacant lot adjacent to 306 McLemore Street. Structures within the District are limited to the large, gabled, lumber storage sheds that comprise part of the old Delta Lumber Company. With the exception of residences at 309 East Market, 302 Front Street and 304 Front Street, the architectural character of the District is early twentieth century with buildings representing the Queen Anne, Prairie, Neo-Classical Revival, Colonial Revival and Bungalow Styles. Except for the temple for Congregation Ahavath Rayim at 2110 East Market, brick buildings are constructed of a very dark brick that is commonly used in Greenwood. Brick and frame construction is equally employed in the District. Ornamentation is derived from multi-light window sash, patterned sash, leaded and stained glass, and millwork including circular decorative vents, classical columns, turned posts, brackets, turned baluster railings, and knee braces. Colors used in the District vary greatly. The condition of the buildings in the District is generally good except for the old Delta Lumber Company complex which is rated marginally contributing due to its deteriorating condition. Most alterations to buildings in the District are restricted to the reduction of porch size and the removal of porch floors and millwork. The quality of rehabilitation work in the District, like the rest of Greenwood, is poor. Every District has at least one building that has been unsympathetically brick veneered or covered in asbestos, vinyl, or aluminum siding. All of the buildings within the District were originally residential in character except for the temple and the Delta Lumber Company but several residences on Market Street are being adaptively used as offices and shops.

Within the Williams Landing and Eastern Downtown Residential District is the Williams Landing site, the point on the Yazoo River where the town of Greenwood, originally called Williams Landing, began as a trading post and shipping port in 1834. The waters of the Yalobusha River and Tallahatchie River flow in the Yazoo River just north of this point and made Williams Landing a popular shipping point. The boundaries of the district were drawn to include the Williams Landing site and as many as possible of the few remaining historic buildings in the area east of Mainland and Howard Streets, the principal streets running north and south through the commercial area of the town. This particular area of downtown has suffered the most from demolition and unsympathetic new commercial construction and the remaining buildings are endangered by expanding commercial development. The residence at 309 East Market is one of only three, two-story Queen Anne style residences surviving in the city. 409 and 411 East Market are excellent examples of the restrained Prairie Style, and the Whittington House at 401 East Market as one of the city's best examples of a Neo-Classical Revival brick residence and is individually listed on the National Register of Historic Places. Local architect Frank R. McGeoy, who designed many of the city's landmark buildings, is represented within the district by the temple building of Congregation Ahavath Rayim. Included at the southern boundary of the district, adjacent to the railroad, is the old Delta Lumber Company plant dating to the first decade of the twentieth century when Greenwood's expanded economy included lumber as one of the area's leading industries.