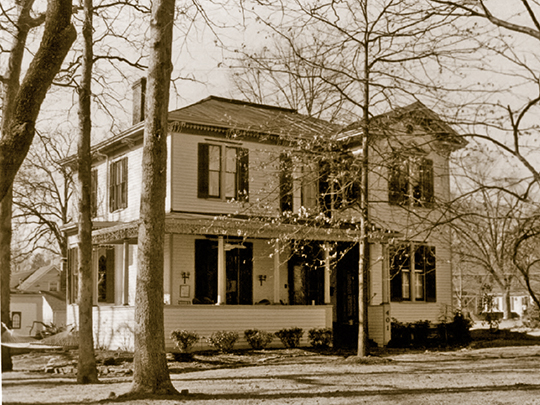 The East Monroe Historic District was listed on the National Register of Historic Places in 2004. Portions of the content on this web page were adapted from a copy of the original nomination document. [‡]

The East Monroe Historic District in Kirkwood, St. Louis County, Missouri is a residential neighborhood which covers roughly 42 acres of land. The district sits just east of the commercial center of town, in one of Kirkwood's original residential neighborhoods. District boundaries include properties along Monroe Avenue and Scott Avenue between Smith Street and Holmes Avenue, as well as the 200 and 300 blocks of Smith Street and Woodlawn Avenue. The buildings in the district range from large antebellum residences to modest 1950s tract houses. The oldest house in the district dates to 1862; the newest one there is less than ten years old. New construction has been minimal; only two houses in the district were built after 1954. All told, there are 77 properties and 115 buildings in the district.

Contributing buildings include one Greek Revival House, two Italianate Houses, 7 Victorian Houses, 13 Twentieth Century Styled Residences, and 53 Builder Style houses. Builder style houses include those with Colonial Revival, Tudor Revival, and Craftsman detailing, as well as Bungalows and Minimal Traditional houses. Architectural styles found in the district include Greek Revival, Italianate, Queen Anne, Colonial Revival, Craftsman, and Tudor Revival. All of the properties in the district are residential and most of the houses occupy relatively large lots.

The East Monroe Historic District continues to reflect its long period of significance, which covers nearly a full century. The district contains a notable collection of larger than average houses, set on generous lots. The neighborhood today looks very much as it did in the middle of the 20th century; nearly 85 percent of the houses in the district are contributing resources. Those houses offer an intact, representative cross section of Kirkwood's historic residential architecture. The oldest houses in the District include some of the most highly-styled 19th century houses in the entire community.