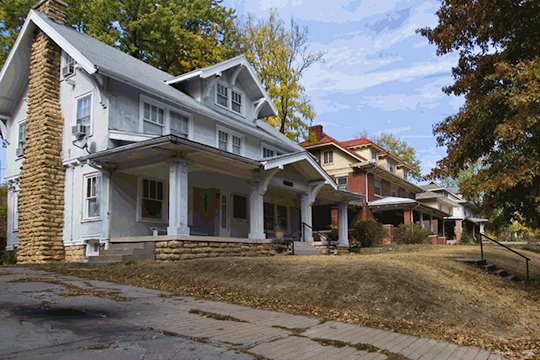 The Squier Park Historic District was listed on the National Register of Historic Places in 2012. Portions of the content of this web page were adapted from a copy of the original nomination document. [‡]

The Squier Park Historic District (Squier Park) encompasses sixteen blocks bounded by Armour Boulevard on the north, 39th Street on the south, Troost Avenue on the west, and The Paseo on the south in Kansas City, Jackson County, Missouri. The residential neighborhood developed primarily in the early decades of the twentieth century. It includes 234 contributing resources constructed between 1880 and 1935. Characteristic features of this early streetcar suburb include the irregular block and lot shapes, deep set-backs for houses, and a curving street that responds to the topography of the land. Large two- and three-story single-family dwellings stand at the center of spacious lots set back from the narrow streets with outbuildings at the rear of the property. Many different architectural styles popular in the early twentieth century are represented in Squier Park, including Late Victorian, Prairie School, Craftsman, Classical Revival, Colonial Revival, and Shingle Style. These high-style resources have sustained few alterations, mainly the replacement of windows and roof material, which in most cases do not impact their ability to convey associations with the period of significance. All of the 28 noncontributing resources were constructed outside the period of significance. In addition to single family residences, the neighborhood contains four low-rise apartment buildings, one mixed-use commercial building, and two educational buildings. Developed along one of Kansas City's earliest major streetcar lines (Troost Avenue) at the turn of the twentieth century, Squier Park exemplifies the Streetcar Suburb property type. The neighborhood and the contributing resources within Squier Park retain integrity of location, setting, design, and materials, clearly communicating feelings about and association with the period of significance.

The Squier Park houses are predominantly frame construction with siding material that varies greatly. Several resources are clad entirely in brick, stucco, or wood (shingle or clapboard). The majority of resources have first stories clad in limestone with upper stories clad in stucco or wood. Limestone is a nearly ubiquitous foundation material. Most roofs have composite shingles while some retain their historic concrete or clay tile roof. Wood and stone are the most common decorative materials and are often used to define architectural styles.

The most common architectural styles represented in Squier Park are the Prairie School and Craftsman, with numerous examples of the Kansas City Shirtwaist variant. There are also examples of Folk Victorian dwellings as well as historical revival styles, including Colonial Revival, Classical Revival, and Tudor Revival. Other unique dwellings exhibit the Shingle and International Styles.

Squier Park is a highly intact residential neighborhood that retains the configuration and the high-style architectural diversity envisioned by developer Robert V. Jones. It retains sufficient integrity of location, setting, design, materials, and workmanship to convey its associations with the period of significance. The resources reflect the wide variety of architectural styles popular during the early twentieth century period of significance. The tree-lined streets maintain their original layout, including the curve of Manheim Road and the park created at its irregular intersections.

In the early twentieth century, the "Community Builder" was a real estate entrepreneur who developed a master plan for the subdivision, laying out utilities and landscape features in addition to roads and building lots. This type of developer was interested in creating a more self-contained community with commercial, educational, and religious components in addition to residences. They often exerted more control over aesthetic features of the development such as landscape design and general architectural character. Developers often used deed restrictions to maintain control of the overall aesthetic quality of the neighborhood and to protect property values. Deed restrictions could dictate physical requirements such as minimum construction cost, setbacks from the street, and the number and function of outbuildings. Other restrictions focused on the race, ethnicity, and religious persuasion of the homeowner. One of the most prominent early "Community Builders" in the country was J. C. Nichols of Kansas City. Robert V. Jones (Squier Park, 1908), a contemporary of Nichols, was a "Community Builder." In contrast to the earlier plats in the neighborhood, Jones' "Squier Manor" plat included numerous irregular building lots created by the diagonal path of Manheim Road. In a Kansas City Star article "The Why of a Winding Road" from 1908, Jones criticized the earlier gridiron development method and described his plan to "run roads along the draws, and the consequence is the roads look as if they belonged there." Jones developed deed restrictions "based on good, hard, common sense, and not devised as a selling device." These deed restrictions included high minimum home prices and wide setbacks.

The "Squier Manor" plat stands in direct comparison to J. C. Nichols' work in the Country Club District further south and west. Robert V. Jones implemented design principals and aesthetic controls similar to those J. C. Nichols instituted, but on a smaller scale. Both men were working during the same time period to create up-scale residential neighborhoods, employing the tenets of the Romantic or Picturesque Movement which highlighted the natural forms and features of the landscape, merging them with the man-made conventions of the street grid and building lots. This park-like environment satisfied the desires of the upper class to have a country manor within commuting distance of the city. The feature that typified this design was the layout of at least one street that curved in response to the topography of the subdivision. William Rockhill Nelson was one of the first developers to incorporate this development concept in Kansas City in his 1905 "Rockhill" neighborhood. The winding road became a characteristic design feature in Nichols' developments. Jones' plat of "Squier Manor," filed less than a year after Nichols filed his plat for "Rockhill Park" at 52nd and Main Streets, laid out Manheim Road to follow the slope of the land as it wound down from 38th Street and Troost Avenue to 39th Street and Virginia Avenue. The winding road created irregular lots as it intersected the regular grid of north-south streets. A small triangular plot formed at the intersection of Manheim Road and Tracy Avenue was designated in the plat as a park, another common feature in Nichols' developments. The primary difference between Nichols' early subdivisions in the Country Club District and Jones' "Squier Manor" was that by the time Jones filed his plat the land stood within the official limits of Kansas City. Water, gas, and sewer systems were already in place and the Kansas City School District had already built several frame buildings for the Faxon School in the 3700 Block of Lydia Avenue (now The Paseo). Jones proudly promoted these features in real estate ads.

Squier Park contains several nonresidential resources that contribute to the significance of the District as they are integrally related to the neighborhood by association and share a common period of significance. These resources supported and enhanced domestic life within the suburb. The largest such resource is the Faxon School at 3700 The Paseo. Small wood frame school buildings were constructed on the site as early as 1907, before Jones filed his plat for "Squier Park." Kansas City School District architect Charles A. Smith designed the two-story brick and stone building in 1911. Three multi-family apartment buildings are scattered throughout the north half of the District. These three-story brick buildings fit with the scale as well as the architectural and functional character of the surrounding neighborhood. The small commercial buildings in the District housed business concerns that supported the residents of Squier Park, including service stations and grocers.

William Stewart was a farmer born in Montgomery County, Kentucky, who moved to rural Jackson County in 1836. A successful agriculturist by 1877, Stewart amassed one of the largest tracts of land close to the growing city. Stewart owned 100 acres between what are now 36th and 41st Streets, Troost and The Paseo. In January 1881, Stewart sold 160 acres to James J. Squier for $10,000.

James J. Squier was born in Pennsylvania in 1836. He managed a hardware store in Cambridge, Ohio with his father in 1856 before moving to Chicago to open another store. In Chicago Squier began a highly successful career in cattle. In 1872 Squier moved to Kansas City to work as a cattle buyer for the Fowler packing house and eventually amassed a great fortune. Squier, along with several other wealthy Kansas Citians, founded Citizens' National Bank in 1882. In 1889, he founded Interstate National Bank, both primarily cattlemen's banks. Squier was known throughout Kansas City as a banker and capitalist.

Squier took pride in the country estate he built shortly after purchasing the land in 1881, outfitting it with a suitable residence, formal landscaping, a fishpond and deer park. Squier was aware that the Kansas City limits were moving further south and east, closer to his property. In 1887, within two years after the city limits extended to 31st Street, Squier filed two plats for subdivisions of his property. "Squier Place," filed in February 1887, subdivided the eight blocks between Cora Avenue (38th Street) and an unnamed street two blocks south (40th Street), Troost Avenue and Lydia Avenue (The Paseo). Squier's "Troost Park Annex," filed in July 1887, subdivided the two blocks between Tremont Street (37th Street) and Cora Avenue (38th Street), from Tracy Avenue to Lydia Avenue (The Paseo).

James J. Squier died in 1900, leaving his estate to his wife and only daughter, Cora. Squier's wife, Mary, remained in the manor house, while Cora moved to the East Coast for education and society. There she met Robert Valentine Jones, a successful residential developer, whom she married in 1902 in a ceremony at Squier Manor. The couple lived in Philadelphia before returning to Cora Squier Jones' estate in 1908. Although most of the property had been subdivided by 1887, the lots still stood empty. Inspired by the opportunity, Jones formed a real estate and mortgage company, the Manheim Realty & Investment Company. Jones developed a new plan to subdivide the land between 37th Street and 39th Street and filed his "Squier Manor" plat in July 1908. The realty company worked with a variety of prominent Kansas City architects, as well as builders and homeowners to design high-style dwellings throughout the subdivision. As a result, many of the homes in the southeastern corner of the District were constructed in 1909 and 1910. Construction continued steadily throughout the 1910s and into the 1920s. Many of the Manheim Realty & Investment Company homes contained such luxuries for the time as hot water heat, sleeping porches, and multiple bathrooms. When these houses did not sell at a profit, Manheim Realty & Investment Company began losing money.

Squier Park retains the original layout of the subdivisions platted between 1887 and 1908, as well as the unique architectural character promoted by developer Robert V. Jones. The few resources that were not constructed as single-family dwellings contribute to the context of the development of the neighborhood, with the exception of the one educational facility constructed outside the period of significance. The large-scale residential buildings fronting Armour Boulevard and the commercial buildings along Troost Avenue represent different historical contexts and were therefore not included in the Squier Park Historic District. The distinct boundaries of the District create a residential enclave that continues to convey associations with its period of significance.