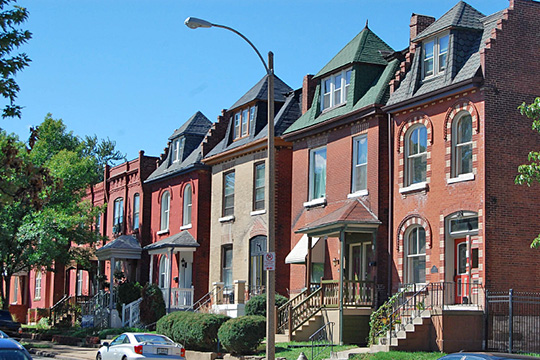 The Tower Grove East Historic District was listed on the National Register of Historic Places in 2013. Portions of the content of this web page were adapted from a copy of the original nomination document. [‡]

The Tower Grove East Historic District is bounded by existing National Register districts and Certified Local Districts and is among the remarkably intact historic neighborhoods that surround Tower Grove Park, a National Historic Landmark. While the earliest buildings in the District date to ca. 1850, the vast majority of building occurred between the mid 1890s and the 1920s. This was the time frame of peak dependence on the St. Louis streetcar system. [see: Streetcar Suburbs, 1888 to 1928] Indeed, the beginning of the boom in construction in the District corresponds with the arrival of the electric streetcar in the area. Roughly bounded by the streetcar corridors of Nebraska Avenue and South Grand Boulevard on the east and west, and by the streetcar corridors of Shenandoah and Gravois on the north and south, the District was historically well-connected to this critical mode of transportation. The District is dominated by residential architecture and contains a mix of working and middle- (and upper-middle) class property types that range from humble, one-story shotgun houses and early homes that reflect Missouri German vernacular building traditions to large, high-style mansions such as might be found in some of the city's wealthy private places.

The Tower Grove East neighborhood is situated in a transitional zone where the development patterns of the "walking city" meet those of the streetcar era. The land the neighborhood occupies was originally commons that were set aside for public use by the city's French founders. Subdivision and sale by the City began in 1838, and in 1855 the land was annexed as part of the city proper. By 1875 there was a scattering of country estates established in the area, as well as a number of residences that were situated along the major farm-to-market thoroughfare of Gravois Avenue. Early residences from the decades surrounding the Civil War still exist in the neighborhood and reflect this diffuse development pattern.

Not including the original land sales by the City, there are 25 identifiable subdivisions in the District dating between the 1850s and about 1916. These subdivisions were platted with alleys and a grid of streets oriented to the cardinal directions. Gravois Avenue is the exception at the southern end of the District with a diagonal northeast-southwest orientation that dates at least to the Territorial Period and perhaps much earlier. A little less than half of the subdivisions in the District date to peak years of construction (the 1890s in particular) and the remainder were platted prior to major development interest in the area. While homes were occasionally built on individual or double lots in these early years, these subdivisions generally sat waiting for builders for several decades before most of their lots were finally built upon. This situation results in streetscapes that may contain groups of buildings constructed by professional developers in the early 20th century along with substantial numbers of buildings dating to the 1890s, 1880s, 1870s, 1860s, or even earlier.

As is typical of St. Louis streetcar suburbs, commercial buildings are built up to the sidewalk and are commonly found at intersections along the streetcar routes, or on pedestrian corridors leading to those routes. Most commercial buildings have cast-iron storefronts and large plate-glass windows with residential quarters on second and third floors. Many are currently still in use as stores, restaurants and offices.

Single-family homes are slightly more common than multi-family units. These homes range from very modest brick shotguns with simple shaped parapets, to large high-style mansions. Most single-family homes however are somewhere in between these extremes with the solidly middle-class, two-story townhouse the most common form.

Vernacular interpretations as well as high-style examples are common. Late 19th century styles such as Italianate and Second Empire are common on buildings constructed in the 1880s and earlier. Second Empire Style is expressed primarily through the presence of a mansard, or false-mansard roof, while Italianate influences are seen in symmetrical facades, side-hall plans, and wide eaves with complex bracketed cornices. Romanesque Revival influences are found on multi-family, as well as single-family homes and are commonly expressed through the use of round arches, cavernous entryways, ornate brickwork and archivolt moldings. The style is also apparent on some of the largest homes in the District and is expressed further with engaged towers, asymmetrical massing, and the contrasting employment of stone and brick masonry.

Twentieth century styles are also prevalent with Craftsman, Prairie, Colonial Revival most abundant. Craftsman-influenced homes employ a wide variety of materials such as stone, terra cotta, brick, glazed brick, wood and stucco on their exteriors. Bungalow, or more appropriately "bungaloid" forms are present as are vernacular forms such as shotgun homes with Craftsman stylistic vocabularies. Many Craftsman homes have gable roofs, though flat roofs and false gables are also common. Prairie influences are most commonly found on large, early 20th century single-family homes with Foursquare plans and hipped roofs, and on four-family walkup buildings. These designs emphasize horizontal lines and may employ ribbons of windows and wide eaves. Colonial Revival influences are commonly seen in pedimented window openings, dormers, and porches. Homes that reflect this style frequently have glazed entries with sidelights and window fans, or columns supporting porch roofs with dentil cornices and entablature.