Photo: Texas Avenue in the Gravois-Jefferson Streetcar Suburb Historic District, St. Louis, MO. The district was the home to many workers at the nearby breweries (e.g. Annheuser-Busch) or manufacturing plants (Koken Barber Supplies) who might walk or commute by streetcars. The Historic District was listed on the National Register of Historic Places in 2005. Photographed by user:Parker Botanical (own work), 2012, [cc-by-3.0 (creativecommons.org/licenses/by/3.0)], via Wikimedia Commons, accessed May, 2014. 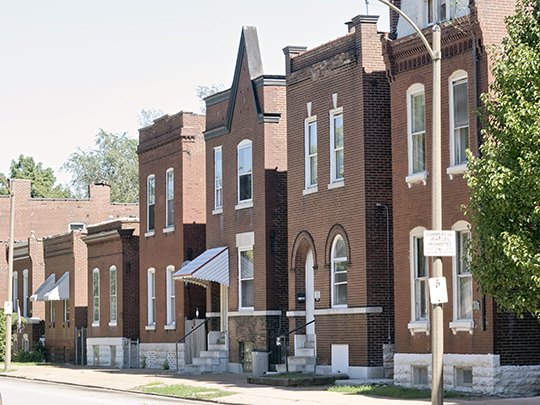 The Gravois-Jefferson Streetcar Suburb Historic District was listed on the National Register of Historic Places in 2005. Portions of the content on this web page were adapted from a copy of the original nomination document. [‡]

The Gravois-Jefferson Streetcar Suburb Historic District is located within the boundaries of the City of St. Louis, Missouri. The 715-acre District is a triangular area generally bounded by the intersection of Gravois and South Jefferson Avenues at the north, South Jefferson Avenue and South Broadway Street (south of Chippewa Street) on the east, Meramec Street on the south, South Grand Boulevard on the west, and Gravois Avenue on the northwest. Gravois Avenue is a major arterial street and historically served as a wagon, streetcar, and vehicular transit corridor. South Jefferson Avenue also was and is a major transportation corridor. Meramec Street is a major collector street. Mixed commercial, institutional, and residential use along these major city thoroughfares visually and historically defines the survey area.

Within the triangle formed by the District's arterial street boundaries, the setting retains its overwhelming residential land use and its buildings and streetscapes retain a high degree of historic architectural integrity. The building stock contains similar functional and architectural property types associated with the evolution of early working-class housing and related commercial and institutional property types typically found in early working- and middle-class streetcar suburbs in St. Louis. The vast majority of these buildings are one- and two-story brick buildings sited on narrow urban lots arranged in a cohesive grid system platted in blocks bisected by brick alleys. The uniformity of lot size, sidewalks, alleys, and building set-backs as development evolved southward and the continuous rows of one- and two-story residences that share the same scale, massing, and repetition of architectural styles and ornamentation provide a cohesive character to the District. The retention of the granite curbs and the original brick paving in alleys and on many interior streets further reinforces the District's visual unity. The dense assembly of red brick buildings with raised limestone foundations, the majority of which were built in a thirty-year time span further contributes to the integrated nature of the early streetcar neighborhoods that compose the District.

Every three to four blocks there are east-west commercial streets such as Cherokee, Chippewa and Meramec Streets, lined with pedestrian-scale buildings that form neighborhood commercial enclaves. Scattered throughout the District, neighborhood commercial nodes are at most residential street intersections. Most corner commercial buildings rise to two or three stories. All of the commercial two and three stall buildings have retail space on the ground floor and residential or office spaces above. The style and materials of the commercial buildings in these neighborhood shopping areas reflect that of the surrounding residential neighborhood, contributing to the uniform appearance of the District. Located along the arterial and collector streets and on prominent corners within the District are a number of churches and large school complexes. Large parks composed of one to four rectangular blocks provide landscaped recreational venues for these early working-class suburban neighborhoods in the western and southern parts of the District.

The earliest buildings in the District are generally in the northern part of the District near late nineteenth century horse-drawn and electric streetcar lines that ran along Gravois Avenue, Arsenal Street, and Jefferson Avenue. Cherokee Street, a historic commercial streetcar corridor in South St. Louis, continues to retain sufficient integrity on both sides of South Jefferson Avenue to communicate what was once a continuous corridor linking these neighborhoods.