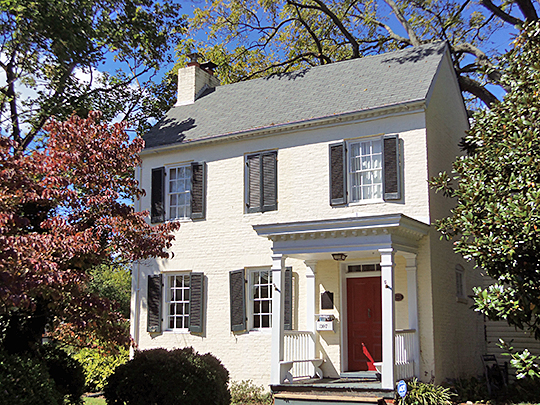 First Settled in the early 1700s, Rockville Village was incorporated in 1860.

Rockville lies in the central piedmont of Maryland, situated on a southeast point of Parr's Ridge, 450 feet above sea level. Lowland areas are located near the three creeks that feed the area: Rock Creek, Cabin John and Watt's Branch. Mature hardwood forests interspersed by recovering burned areas, or "saplingland" originally covered much of present day Rockville.

In the 17th and 18th centuries, most of the present-day City of Rockville was covered in mature hardwood forests and "barrens." (The Maryland barrens were largely trees with little undergrowth.) These barrens provided hunting grounds for the Piscataway Indians living in villages along the Potomac River and the Susquehannock and Iroquois to the north and northwest along the Monocacy and Susquehanna Rivers. A network of established trade routes continued to connect the villages by a north-south route along the "fall line" and an east-west route through the mountains.

Beginning in 1675, the first land sales or grants occurred in the Montgomery County area: first along the banks of Rock Creek up to Rockville, then to the west of Rock Creek along the Potomac, and then north and east of present-day Rockville. Today the city lies on three original land grants: Exchange, New Exchange Enlarged (1735), and Valentine's Garden Enlarged (1722). The former two consisted of 1620 acres purchased by Arthur Nelson. The latter included 950 acres mostly northeast of the present-day B&O Railroad station. These early patents continued to be subdivided through the late 18th century with the purchase and resale of land. Such land speculation was common in the pioneer economy that offered few alternative forms of investments, other than slaves and silver.

As settlers moved west and increased in number, the state set up new counties and local self-governing bodies were formed. A system of hundreds of tax districts were delineated within each county, but the main local authority lay with the county and its county court. In 1696, Prince George's County was established and included the western territories now encompassing Rockville, and the area covered by the later Montgomery, Frederick, and western counties. Fifty years later in 1748, Prince George's County was divided and Frederick County established with Fredericktown as the county seat of an area which now comprises Frederick, Montgomery and Washington Counties. In 1751, Georgetown was established next to a tobacco inspection warehouse as the port city for Frederick County. This made it the first city in what was to become Montgomery County in 1776.