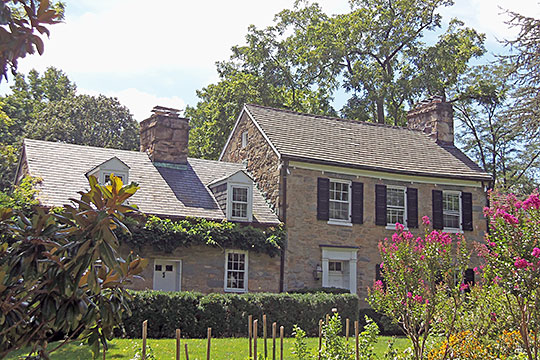 Bethesda, a census‑designated place, shares part of its border with Northwest Washington, D.C.

Bethesda is generally bounded by the Capital Beltway (I-495) on the north, the Potomac River on the west, Western Avenue on the south, and Rockville Pike (Route 355) on the east.

The community was named for a local Presbyterian Church complex. Translations of the name are "House of Mercy" (Aramaic) or "House of Kindness" (Hebrew). Bethesda was first settled in late 17th century by tobacco farmers; this farming continued through the 18th century.

The coming of the Baltimore and Ohio Railroad across Montgomery County in the 1880s and the electric trolley in 1891 opened the area for residential development targeted to Washington, D.C. commuters.

The area now known as the Bethesda Central Business District, originally called Darcy's Store, was a small crossroads community surrounded by farms into the post-Civil War era. Most of the early buildings from this period were demolished as Bethesda grew, following the extension of the Tennallytown and Rockville Railroad Company streetcar line along Wisconsin Avenue to Alta Vista in 1890.

In the 1890s, the Chevy Chase Land Company began buying farmland for residential development and by 1912, very little land in the area remained in agricultural production. The B & O Railroad's Georgetown Branch, opened in 1910, further stimulated Bethesda's commercial growth and led to the development of related industries, such as coal yards, lumber yards, a planing mill and an ice plant, in Bethesda.

Bethesda's first real estate boom, from 1922 to 1926, was prompted in part by the increased popularity of automobiles as a means of commuting and led to the subdivision of more farmland and escalating land values. By the late 1920s, Bethesda had three filling stations, a drug store, a hardware store, a variety store, a grocery store, two feed stores, two barber shops and three small lunchrooms, and at the close of the 1930s, 23 auto-related businesses were located in Bethesda. About a dozen early 20th-century buildings remain to reflect Bethesda's transition in the 1920s and 1930s from a rural crossroads to an automobile-oriented, suburban community.

The development of the National Institutes of Health complex in 1938 and Bethesda Naval Hospital in 1940 spurred additional commercial activity in Bethesda during World War II. Following the war, a second wave of homebuilding took place. As Bethesda's residential areas matured, the downtown continued to grow and prosper, with a significant number of commercial buildings being constructed using various mid-century modern architectural expressions. Bethesda experienced another wave of growth in the 1980s, following the arrival of Metrorail, with many new buildings replacing post-World War II and earlier commercial structures. The emphasis of much of this development shifted from smaller commercial activities along Wisconsin Avenue, designed to serve nearby residential areas, to offices, shops and restaurants that have made Bethesda a significant downtown for the southern part of the County, as well as a regional destination.