Photo: Madison House, ca. 1800, 205 Market Street, Brookeville, MD. The house was inherited by Caleb and Sarah Brooke Bentley. It became known as the Madison house because for 3 days in 1814 it was the refuge of James Madison, 4th U.S. President, who took shelter there when the British burned Washington. Photographed by User:Km164 (own work), 2006, [cc-by-2.5 (creativecommons.org/licenses/by/2.5)], via Wikimedia Commons, accessed January, 2013. 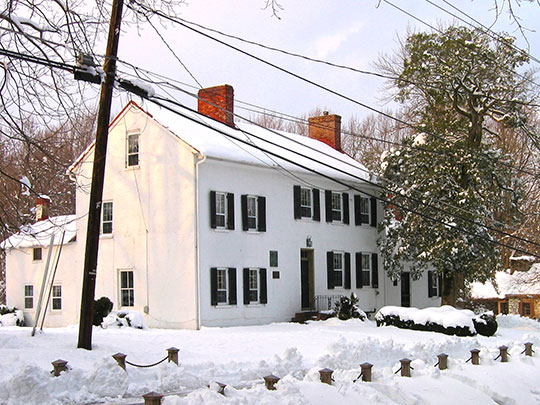 Brookeville is a historically significant 19th century rural town located in northeastern Montgomery County, Maryland. Approximately 18 miles north of the District of Columbia, the Town was founded in 1794 by Richard Thomas on land inherited by his wife Deborah Brooke from her father Roger Brooke IV, son of James Brooke, an influential Quaker settler and the largest land holder in what was to become Montgomery County. The community originally consisted of 3 houses: the Caleb Bentley House, now known as the "Madison House," the "Blue House," and the "Valley House." To this core, Thomas laid out an additional 56 quarter-acre lots sited along two major streets (Market and High) and two side streets (North and South). Brookeville was initially incorporated in 1808 by an Act of the General Assembly.

By 1813 the community had a constable and had grown to fourteen houses, two mills, a tanning yard, two stores, a blacksmith, a post office, and a private boys' school—the Brookeville Academy. The Town continued to flourish in the ensuing years as shops and services expanded to include a girls' school—Mrs. Porter's School for Young Ladies, two physicians, two shoemakers, a seamstress, a carpenter, and a watchmaker. Brookeville had become a center of commerce and education in an area which played an important role in the development of the science of agriculture. Several of its citizens, including Thomas Moore, were part of a network of progressive agronomists who initiated a number of improvements in farming methods that were practiced both locally and nationally. Moore, whose farm Longwood was immediately adjacent to the Town, was responsible for a number of technical advances in commercial agriculture, most notably the development of refrigeration for the transportation of produce. The Town itself was an important way station on the Westminster Pike (Georgia Avenue), a major route for the transporting of agricultural products to the District of Columbia. It was in the home of one of these progressive farmers, Brookeville Postmaster Caleb Bentley, that President James Madison and his staff sought refuge following the British invasion of Washington during the War of 1812. Bentley's wife, Henrietta, was a friend of Dolly Madison. Over two days during the British burning of the White House and occupation of the Capital in 1814, President Madison conducted the business of the government from the Bentley home, joined by Attorney General Richard Rush and Secretary of State and Secretary of War James Monroe.

Following its historic role as the nation's "Capital for a Day," Brookeville continued to prosper. By 1880 the Town's population had reached 250. With the advent of the automobile in the early 20th century, however, changed mobility patterns and markets led to the demise of the Town's commercial businesses. Despite their loss and the encroachment of the 20th century suburban development and sprawl encouraged by the automobile, the Town today remains a unique collection of a variety of period structures existing in the same relationship to one another and to the roadways as they were when they were originally constructed in the 18th, 19th, and early 20th centuries.