Photo: Residential duplex in Brick Hill, Baltimore, MD. The Historic District was listed on the National Register of Historic Places in 1988. Photographed by User:Smallbones (own work), 2013, [cc-by-1.0 (creativecommons.org/publicdomain/zero/1.0/deed.en)], via Wikimedia Commons, accessed January, 2016. 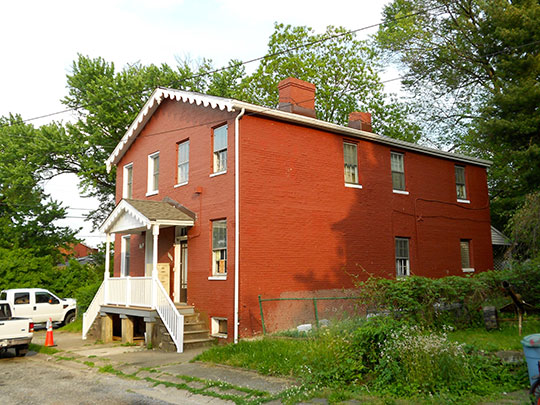 The Brick Hill Historic District was listed on the National Register of Historic Places in 1988. Portions of the content of this web page were adapted from a copy of the original nomination document. [‡]

Brick Hill is an enclave of 25 dwellings located on a rise overlooking the Jones Falls Valley in the Hamden/Woodberry section of northern Baltimore city, Maryland. Constructed ca. 1877 to accommodate workers in the Woodberry Manufacturing Company's Meadow Mill during the second phase of expansion of the Jones Falls textile industry in the late-19th-century, these duplexes are primarily of brick construction, as reflected by the neighborhood's name. Its date, construction material, and relative isolation on the west side of the Jones Falls distinguish Brick Hill from earlier groups of stone mill-workers' houses elsewhere in the valley.

The neighborhood comprises only five blocks, defined by three streets and their connecting alleys. The principal avenue, Seneca Street, runs about 700' north-south along the edge of a cliff above Meadow Mill. Oakington Street intersects Seneca about halfway along its length, and extends to the west a distance of approximately 270 feet. To the south, a short street called Parkden Avenue (named Parkside Street on a ca. 1912 insurance map) runs parallel to Oakington Street and defines the southern boundary of the community. A wooded area, part of Druid Hill Park, lies beyond Brick Hill to the west and south; the Poole and Hunt Foundry is located to the north. These features of topography and land use (a steep cliff on one side, forested parkland on two others, and intensive industrial development on the fourth) afford the small neighborhood a strong sense of seclusion and inward focus.

The houses of Brick Hill are typically 2 or 2-1/2 story gable-roofed duplexes, with four-bay-wide gable facades oriented to the street. With the exception of 3454-3456 Seneca Street which is built of roughly-coursed rubble with prominent quoins, the duplexes are constructed of brick laid in 7:1 common bond on stone foundations. Each pair of units shares a porch, typically hip-roofed, over their transomed entrances, located in the two central bays. Exterior decorative detailing is minimal: porch posts may be turned or chamfered, and several buildings retain scalloped vergeboards at their slightly-projecting gable eaves. Window and door openings are headed with shallow jack arches; original windows are typically 6/6, with smaller (originally 3/3) sash lighting the attics of the 2 1/2 story houses. The buildings are two rooms deep, with side entrances in their longitudinal walls and lower gable-roofed back buildings extending to the rear. Sometimes a frame shed addition abuts the rear gable of the back building. The houses are set on fenced lots of about 1/10 acre; those on Seneca Street are set back very slightly from the street, their view of the Jones Falls valley dominated by the Mill's tower and belfry. Those on Oakington and Parkden front directly on the sidewalk.

In addition to the 22 masonry duplex units, the district includes two small detached two story frame gable-front houses at 3406 and 3402 Seneca Street. One of these (3402) appears on a ca. 1912 insurance map labeled "Meadow Mill Tenements;" the other (3406) is identical and was probably built shortly after that date. Because of their association with the textile industry, these buildings are considered to contribute to the significance of the district despite their anomalous form and construction. One non-contributing building occurs within the district: a frame bungalow dating from the second quarter of the 20th century, constructed on a previously-undeveloped lot at 3440 Seneca Avenue.

The district retains a high degree of integrity. As noted, it includes only one non-contributing building. Alterations to contributing structures are few and generally confined to the replacement of original 6/6 or 3/3 windows with 1/1 sash, and the repointing and cleaning or painting of masonry.

Brick Hill is significant for its association with the 19th century textile industry in the Jones Falls valley of Baltimore. Comprising an isolated enclave of well-preserved workers' houses which served the Woodberry Manufacturing Company's Meadow Mill, Brick Hill exemplifies the paternalistic system which characterized relations between management and labor in Baltimore's textile industry during the period when the Jones Falls valley mills produced between 70-90% of the nation's total output of cotton duck and related products. Throughout its development from the mid-1840s to the peak of production in the last quarter of the 19th century, the Baltimore textile industry emphasized the "Rhode Island" system of organization, involving entire families in the labor force and providing numerous social amenities for workers, among them substantial housing at nominal cost. The dwellings in Brick Hill, solidly-built masonry duplexes situated on lots large enough to accommodate a kitchen garden, typify the housing provided for workers during the industry's second phase of expansion in the 1870s.

The Baltimore textile industry had its origins in the rush of American entrepreneurs to fill a void created by the War of 1812 and the national embargo of British goods which preceded it. By 1810 there were 87 cotton mills operating in the United States. Eleven of these were in or near Baltimore, where the various streams flowing to the Chesapeake Bay offered the advantages of cheap water power close to equally inexpensive water transportation. A large number of these early factories were spinning mills which converted the raw cotton into yarn, as the weaving of fabrics for home use was still a widespread "cottage craft." The demand for cotton yarn expanded as it replaced the more expensive linen warp of colonial fabrics.

The demand for yarn, and later woven cloth, in Baltimore came largely from the need of the local shipping and shipbuilding industries for sailcloth ("duck"). All American port cities had long relied on large amounts of linen duck, mostly supplied by Holland. About 1809, Seth Bemis of Watertown, Massachusetts, began making duck from machine spun cotton, a thread capable of matching the strength of linen. The new material was not accepted at first, but the Embargo and War of 1812 made imported linen duck scarce or unavailable. In 1812-1813 one Baltimore firm sold $20,000 worth of Bemis cotton duck, and another retailer sold $21,000 worth in 1815.

The first of Baltimore's businessmen to capitalize on these developments were David Carroll and Horatio Gambrill. In 1832 Carroll and Gambrill bought the mill of the Washington Manufacturing Company at Mt. Washington. Begun in 1810, this early textile mill most likely produced cotton warp yarn for home consumption; Gambrill and Carroll probably used the output of this mill to supply weavers of sailcloth. By 1839 the advantages of integrating spinning and weaving in one mill using the newly perfected power looms had become apparent. Gambrill and Carroll, with other local investors, bought and converted the Whitehall flour mill (on the site of the present Clipper Mill) to just such an operation with five power looms. In 1842 they converted another flour mill at Woodberry into a spinning mill.

William E. Hooper, son of a sailmaker, went into business as a wholesaler of sail cloth in the 1840s and became one of Gambrill's best customers. Around 1847, Gambrill parted company with Carroll and formed a partnership with Hooper. Together they produced cotton duck at Woodberry and Clipper mills, and fishnets and seine twine at Park Mill, until 1865, when Gambrill sold his interest in these factories to Hooper. Gambrill went on in that year to construct Druid Mill, which was innovative in housing all the operations of a cotton duck factory under a single roof, and in featuring appealing Italianate exterior detail previously unseen in the valley's utilitarian structures.

Hooper's newly-formed Woodberry Manufacturing Company expanded the operations at Woodberry, Clipper, and Park Mills, and in 1877 added Meadow Mill. By 1881, Hooper had purchased Druid Mill as well. Upon his death in 1885, the five mills were left to his sons Theodore, James and Alcaeus.

The late 19th century saw the Jones Falls textile industry control a near-monopoly on the domestic production of cotton duck, accounting for some 70-90% of total output. This ascendancy was reinforced by the consolidation in 1899 of seven separate duck producers (including the Woodberry Manufacturing Company) operating 14 mills with a total of 227,028 spindles. This conglomerate came to be known as the Mount Vernon-Woodberry Cotton Duck Company, and included several mills located in South Carolina and Alabama.

When the demand for sailcloth declined with the passing of sail transportation in the early 20th century, the Jones Falls valley mills continued producing large quantities of canvas, twill, and drill for other purposes. The armed forces relied upon these sturdy textiles for uniforms, knapsacks, and similar uses during both World Wars.

Throughout its history, the Jones Falls valley textile industry emphasized the "Rhode Island" or "family" system of organization, which included entire families in the labor force. Beginning in the mid-1840s, industrialists constructed groups of substantial dwellings on the hillsides above the mills, and made them available at nominal rent to textile workers and their families. Companies also sponsored savings associations, stores, churches, and a newspaper, all of which contributed to the mill communities' sense of containment and self-sufficiency.

Of the half-dozen groups of workers' houses in the Jones Falls valley, the Woodberry Manufacturing Company's Brick Hill is distinguished by its small size—a tightly-knit group of only 25 dwelling units—and relative isolation on the west side of the Jones Falls, separated by topography and a historically inconvenient pattern of street access from the rest of the residential community which developed on the opposite side of the Falls and generally to the south.

It is further distinguished by its association with Meadow Mill (listed in the National Register in 1973), whose landmark tower symbolizes the rapid expansion of Baltimore's textile industry in the final quarter of the 19th century.