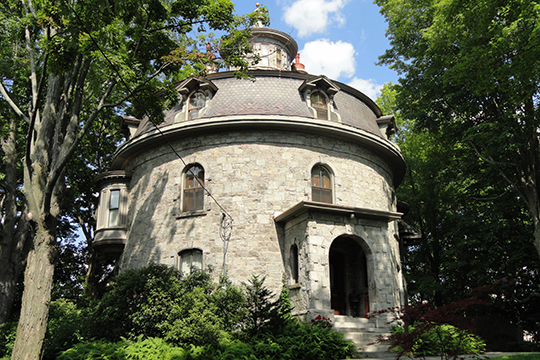 The Wannalancit Street Historic District [‡] was listed on the National Register of Historic Places in 1998.

The Wannalancit Street Historic District is notable for its concentration of well-preserved, representative examples of 19th century domestic architectural styles. Wannalancit Street is a visual catalogue of 19th century architectural history, including examples of the Greek Revival, Italianate, Second Empire, Queen Anne and Colonial Revival styles. These examples range from modest vernacular dwellings to pretentious, high style residences, some designed by leading local architects. Perhaps the most unusual building on Wannalancit Street is the Round House, or "Castle" (1872) built for Jonathan Bowers, a local entrepreneur. The unique round form of the Round House is rare, not only in Lowell, but throughout the United States. There are few documented examples.

By the late 19th century tree-lined Wannalancit Street had become a fashionable residential neighborhood, desirable for its elevation and scenic vista of the Merrimack River and the Pawtucket Falls. Occupants of Wannalancit Street area have included prosperous local merchants and upper class businessmen, such as Oliver Cushing, an agent of the Lowell Gas Company for 25 years. Cushing resided at #48 Wannalancit Street in an exuberant Queen Anne House (1885) designed by Frederick Stickney, a prominent local architect.

The earliest and latest pretentious house on Wannalancit Street is at #22 (ca. 1853); it is a Greek Revival, side-hall cottage with some Gothic Revival trim. An early occupant of the house was William Swett, a Lowell carriage maker. Haven Perham, treasurer of the Kitson Machine Company (Lowell's 2nd largest manufacturer of cotton machinery) resided at #19, another Queen Anne style dwelling.