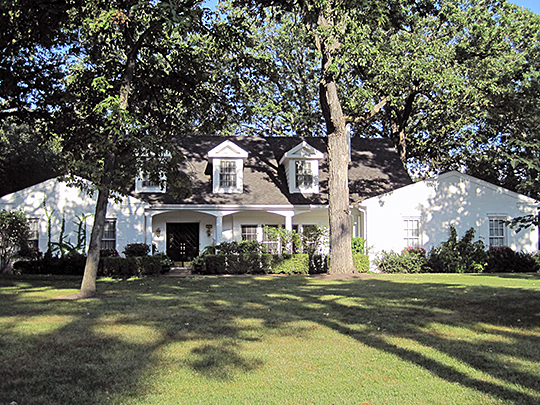 The Deerpath Hill Estates Multiple Property Submission was listed on the National Register of Historic Places in 2006. Portions of the content on this web page were adapted from a copy of the original nomination document. [1] .

Deerpath Hill Estates is one of the first subdivision efforts at comprehensive, unified land use development in Lake Forest, Illinois. The developer, Henry K. Turnbull, and his principal architect, Stanley D. Anderson, utilized a combination of City Beautiful and American Garden theories, in the 1920s, to create an elegant upscale development in the midst of huge country estates in west Lake Forest. Their subdivision designed streets, cul-de-sacs, gates and monuments created the environment for an eclectic mix of late 19th Century and early 20th Century revivalist homes. The development failed in the Depression, as did many others. Despite the financial failure of the development in the Depression, this eclectic mix of homes within a designed, City Beautiful planning environment laid the groundwork for developers that came after the Depression and the final build-out that occurred after World War II. These subsequent builders followed the land use plan created in the 1920s. This defined plan and eclectic mix of homes supports the historic nature of the neighborhood today.

Real estate developer Henry K. Turnbull purchased three tracts of land from 1926 through 1930, within walking distance of the Deerpath Avenue rail stop. As the new line was being built, Turnbull was subdividing his tracts, building streets and installing utilities. Turnbull's approach was somewhat different than the typical developers in that he designed Deerpath Hill Estates as an integrated project that sought to leverage the ambiance of the existing country estates and exclusive lifestyle of Lake Forest. Turnbull's goal was to build an upscale, exclusive development that would appeal to wealthy and professional class buyers who had discriminating taste, while at the same time, keeping the development within walking distance of the new interurban train service to Chicago's Loop.

The original 20-acre development of Deer Path Hill Estates, simply called Deerpath Hill Estates, is located at the southeast corner of Deerpath and Waukegan Roads. This first section is a long, rectangular piece of property running south from Deerpath along Waukegan Road. Waukegan Road was known as Telegraph Road in this time period. The roads inside this 20-acre first section are King Muir Road (The name was originally hyphenated, King-Muir), Verda Lane, Armour Circle, High Holborn, and Mellody Road. An additional road was platted, Rothesay, but the name was abandoned when the street was realigned. The one-block section of street became an extension of Mellody Road.

The French Norman gates and gateposts at each of the entrances to the 20-acre section define the boundaries of this first development. This section of the development contains curving streets, cul-de-sacs and a traffic circle. The development is described in a lavishly photographed and highly descriptive 60-page, oversize sale brochure, referred to as the Deerpath Hill Estates Folio. The Deerpath Hill Estates Folio points out that the installation of the City of Lake Forest's bronze, hanging bracket electric lamp with ornamental cast concrete lamp pole is a further defining element in all three sections of Deerpath Hill Estates. Lake County records show Henry Turnbull purchased this section February 11, 1924, and took out a $45,000 mortgage on the property February 26, 1926.

The streets in this second section are the north extension of King Muir Road, Parkmead Lane a cul-de-sac, Northcliffe Way, Inverlieth Terrace and Burton Drive. The double-drive entry at King Muir and Deerpath define the entrance to the First Addition. This section of the development contains curving streets and cul-de-sacs. The original 25' x 52.5' reflecting pool, with fountain, located between the drives has been razed. The City lanterns and ornamental concrete poles also define the First Addition. Henry Turnbull purchased this section March 15, 1928.

The Norris/Cudahy Estate (originally the Joseph M. Cudahy estate, later owned by Frank Norris), designed by David Adler, separates the original development and the Second Addition. This estate property is now subdivided and the principal streets intersecting Deerpath are Sussex Lane and Warwick Lane with the David Adler designed manor house remaining on approximately two acres. When the Second Addition was platted in 1929, a road was built through the rear of the Norris/Cudahy Estate connecting the original section and the Second Addition of Deerpath Hill Estates. At this time, the Rothesay street name in the first section was abandoned and the Mellody Road name was used for the entire street. There were two short cul-de-sacs designed for the Mellody Road extension, Dunstan Terrace and Talbot Road. However these cul-de-sacs were never built. Henry Turnbull purchased the Second Addition property March 14, 1929. It was opened for tours and sales July 22, 1930.

At the end of the 19th Century, the City Beautiful Movement for planning growing cities and suburbs became popular in the United States. Simultaneously, the American Garden Movement and the English Garden Movement began to alter the landscaped appearance of cities and suburbs. The architectural historian John Milnes Baker states that popular architecture styles shifted at the same time away from Victorian ideals. The Arts and Crafts Movement had the effect of moving housing styles to simpler, more rustic styles. Shingle style and Prairie style are the two predominant examples. At the same time, there was a countervailing movement towards revivalist styles English Tudor, French Norman, and American Colonial. These are examples of homebuilders' efforts to provide homes that were considered fashionable and modern and yet still traditional and formal. Virginia and Lee McAlester in A Field Guide to American Houses, also describe the Arts and Crafts movement and the countervailing revivalist era. They define the revivalist era as the "Eclectic movement," and go on to say that the many styles of the era Renaissance, Medieval, Tudor, classical, etc. all were relatively pure copies of the original building traditions and that "all the styles vied with one another in friendly competition."

Turnbull and Anderson embraced the traditional formalism of the revivalist/eclectic styles. They built houses that were architecturally accurate renditions of past styles, but with modern amenities and adaptations. All of the houses are highly similar in size and mass, all are two story and are about the same square footage, approximately 2,500 to 3,500 square feet. All have two stall garages, modern kitchens, formal dining rooms, multiple bathrooms, etc. Practically all have at least two servants' bedrooms, typically located over the garages, and a back stair leading to the kitchen.

In 1926, Henry Turnbull and, Stanley D. Anderson, developed Deerpath Hill Estates in recognition of McAlester's "friendly competition" of design styles. Rather than choosing one style throughout, they took the popularity of the multiple designs styles one step further than most developers by combining many styles in one development. The 15 original, pre-Depression houses are defined as late 19th and 20th Century revival houses. Although the houses are similar in scale and mass, no two are identical. The differences are deliberate and were done to provide architectural interest throughout the development. Modern historical references catalog the houses as six English Tudor houses, four French Norman houses, one Spanish Colonial, and four Colonial/Georgian-style houses. The Deerpath Hill Estates Folio describes several categories of design in greater detail "Normandy Provincial," "Cotswold House," "French provincial farmhouse from the South of France," and "Maryland Colonial, in the tradition of southern Atlantic seaboard homes."

The architectural diversity is one of the strong points of the vibrancy of the Deerpath Hill Estates development. The difference in styles has permitted flexibility in the design work that followed the original development. While most of the post-World War II houses do not follow the late 19th and early 20th Century revivalist idioms, the flexibility of style existing within the formality of the original City Beautiful subdivision design allowed later designers to build post-World War II houses that complement rather than detract from the original plan.